2018.11.09 Tracing the history of the Shiwaku Carpenters in Honjima, a former naval headquarters 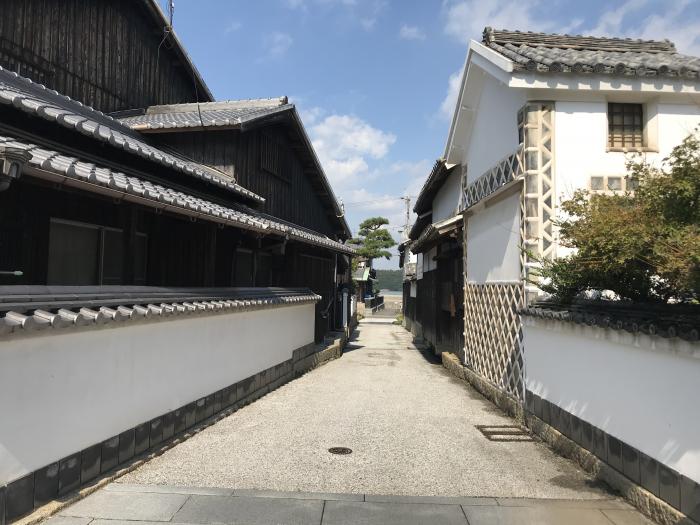 35 minutes by ferry from the Port of Marugame (Kawagawa). Honjima is one of the main Shiwaku Islands, an archipelago made up of 28 islands of varying sizes. From the from the Sengoku Period to the Edo Period the island was famous for its skillful sailing and shipbuilding techniques and technology, was the headquarters of the Shiwaku Navy, and was allowed to self-govern itself by Oda Nobunaga, Toyotomi Hideyoshi, and Tokugawa Ieyasu. The Shiwaku Islands once had a prosperous shipping industry and also developed a great deal of shipbuilding technologies. The islands produced many sailors and shipwrights. We walked along with and listened to Shiwaku Island tour guide Kunio Miyake talk about the architecture and the Shiwaku Carpenters (a collective name for carpenters from Shiwaku who were active mainly in the areas along the Setouchi coast and were reknowned for their skill from the late Edo Period to the Meiji Period) as we toured the Kasajima District, which is designated as an Important Preservation District for Groups of Historic Buildings and features more than 100 buildings which were built between the end of the Edo Period and the early Showa Period. 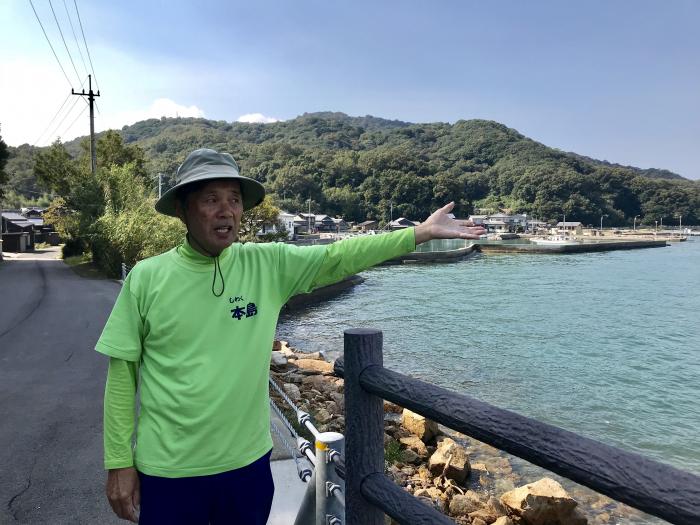 "The Shiwaku Islands began with the granting of rights to a territory of 1,250 koku (a traditional Japanese measurement) to 650 mariners by official decree of Hideyoshi and Ieyasu. The sailors called themselves "ninmyo" in relation to the daimyo feudal lord, and they called the representative of the ninmyo "toshiyori" (elder). Honjima was home to two large villages, Kasajima Village and Tomari Village. Tomari was home to 90 ninmyo, and Kasajima to 78 ninmyo". Mr. Miyake explained against the backdrop of Kasashima Village. Mr. Miyake is from Kasajima. "This was a naturally good port. That's why cargo shipping was so prosperous here in the Edo Period. This is also why there are many remaining small, but very lavish homes in the village. Philipp Franz von Siebold also visited the small village of Shiwaku in the Seto Inland Sea, with its rows of kawara tile roofs. And it is recorded that he said it must be a truly wealthy village". 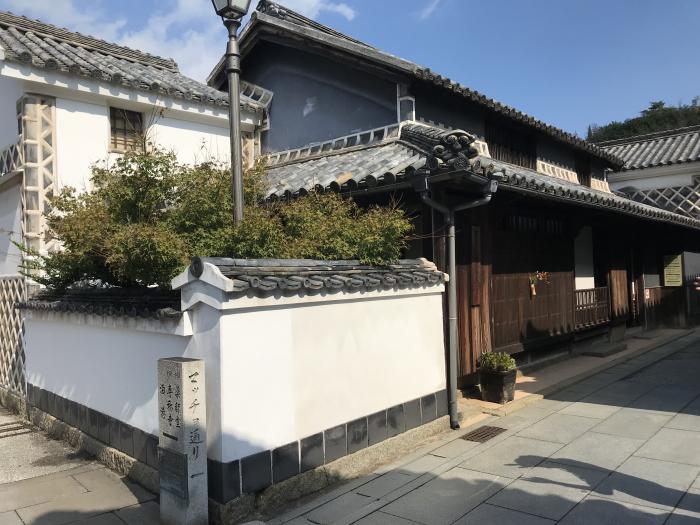 The Kasajima District is designated as an Important Preservation District for Groups of Historic Buildings and features more than 70 buildings which were built between the end of the Edo Period and the early Showa Period. First, Mr. Miyake guided us to the Kasajima Machinami Hozon Center Sangitei (Sanagitei Townscape Scenery Preservation Center), one of the district's representative buildings which visitors can tour inside. "Burnt cedar planks with Namako walls. These elements are found both outside and inside the building. This is the house where Mr. Sanagi served as the "toshiyori" (elder). The lattice made of long plans and short planks of wood is called the 'Oyako Senbon Dekoshi Mado' (Parent and child 1,000 lattice window). This design was from Kyoto. As to why there was a Kyoto style design in Honjima, it was because Honjima was a directly government controlled area, so there were cultural ties. When I was a child the manner of speaking here was also slightly different. I believe it was more of the Edo-period Kansai dialect". 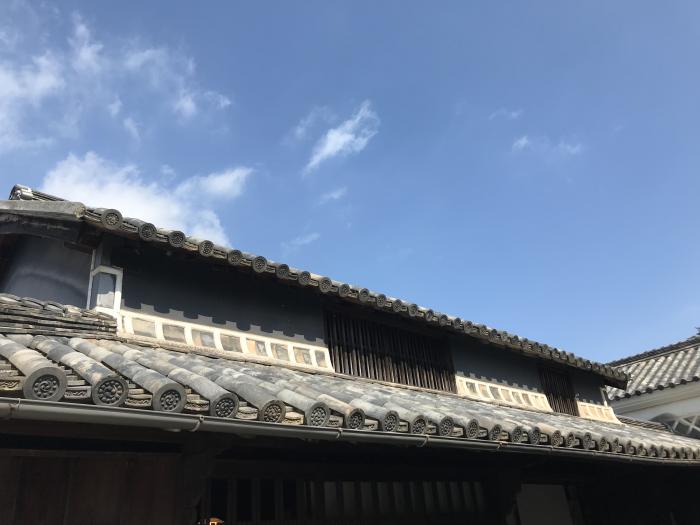 "Another characteristic of Shiwaku's buildings is the 2 story storage. These are called 'Tsushinikaidate'. Because they are used for storage, they have mushiko mado windows for ventilation. The roofs are kawara tile". 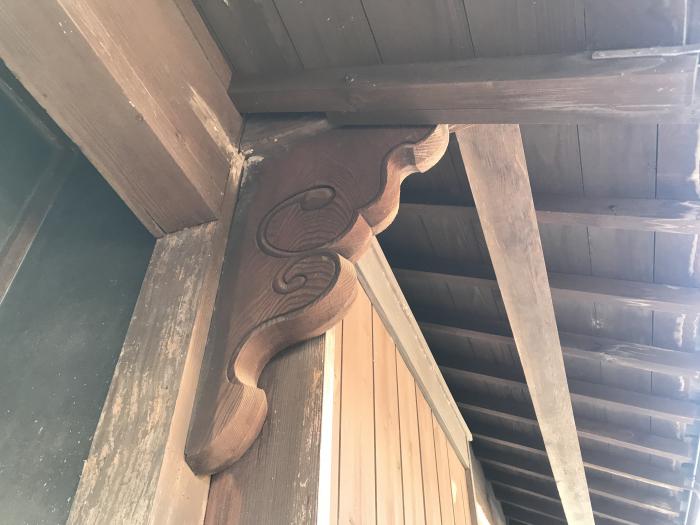 "This decoration under the eaves. Do you know what it is? It sticks out horizontally from the column. These are triangular reinforcement material called 'mochiokuri', which support beams and shelves. Notice they are decorated. You can get a sense of the playfulness of the carpenters. The buildings of the village feature mochiokuri with various different decorations, so try to look out for them as you tour around the village. These mochiokuri were used in both homes and ships. The Shiwaku Carpenters were a group of carpenters who were active from the Edo to Meiji Periods. During this period, 1 out of every 3 households in Honjima was a carpenter, and even 2 out of every 3 households in some villages, so there were a wide variety of carpenters including shrine carpenters, shipwrights, housebuilders, and joiners. There was also probably teaching and training in information and techniques and skills". 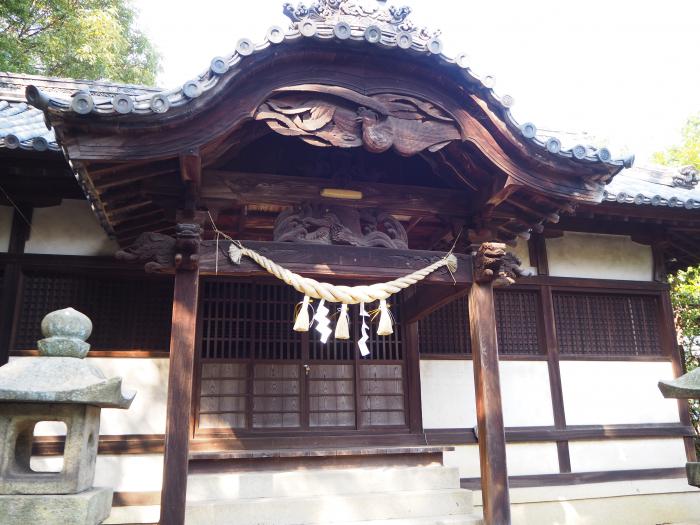 Onoe Shrine is located slightly uphill from the townscape. It was constructed in 1916. Mr. Miyake explains, "This shrine was built as training for the Shiwaku Industry (Repair) School". The carpenter skills were generally passed on through an apprenticeship system, however modernization of the Meiji Era also brought the creation of construction companies and more. Apparently, the Shiwaku Carpenters felt that the succession of their carpentry skills was in danger, so the master builders established the Shiwaku Industry (Repair) School. 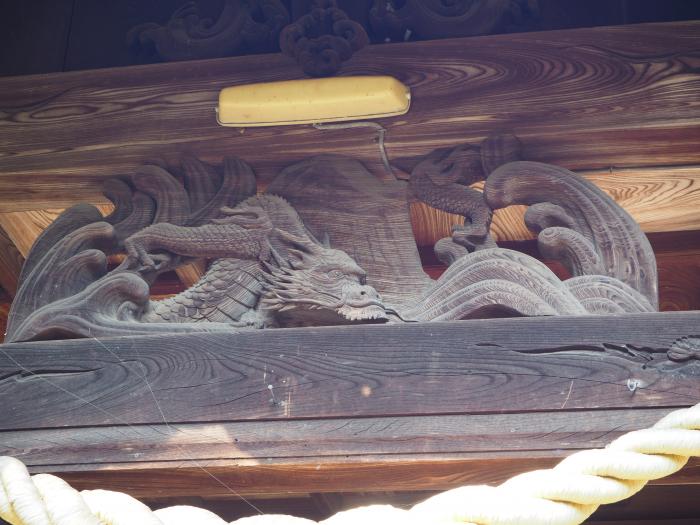 The most surprising thing about our visit to Onoe Shrine was the carvings in the shrine pavilion. A dragon was carved on the front. Even now it seems like it might come alive and begin moving. "The people who built this shrine, would be the equivalent of today's junior high school students. Look at the spirit and skill, and the pure technique of the Shiwaku Carpenters. There are also other carvings on the island by those that were considered the best among the Shiwaku Carpenters, and compared to those, these carvings are still less developed, but are still amazing aren't they? A dragon, shishi lion, baku tapir, each of the carvings us if an imaginary animal, but are incredibly realistic. The carving style is very open-minded. They are each carved from a single piece of wood. This is the true sign of the Shiwaku Carpenters". 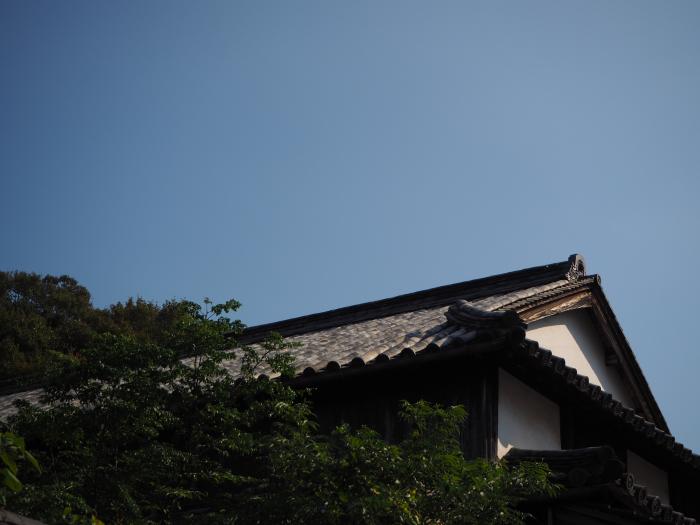 "Look at that rooftop." Looking up towards the sky where Mr. Miyake indicated, we saw a small rounded roof. "It is round, the opposite of the arches of shrines and temples. This is called 'mukuri'. It is the opposite of the inward sloping arches. This roof shape is a popular style from Kyoto. The carpenters of Honjima were very quick to adopt Kyoto fashions". 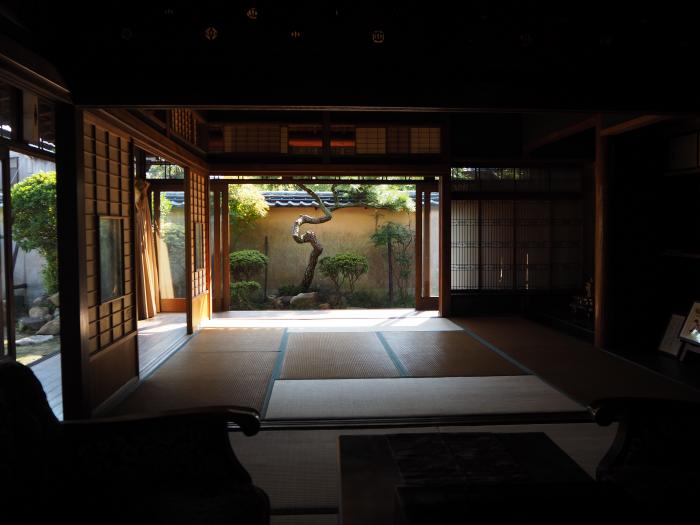 The Yoshida-tei stands facing the Kasajima District town road, and is a house that was built by the Shiwaku Carpenters in the Taisho Era. The surrounding buildings are mostly from the Edo and Meiji periods, and most of the houses do not have gates, but the Yoshida-tei is distinctive for its stacked, cut granite fence. Visitors can also tour inside. 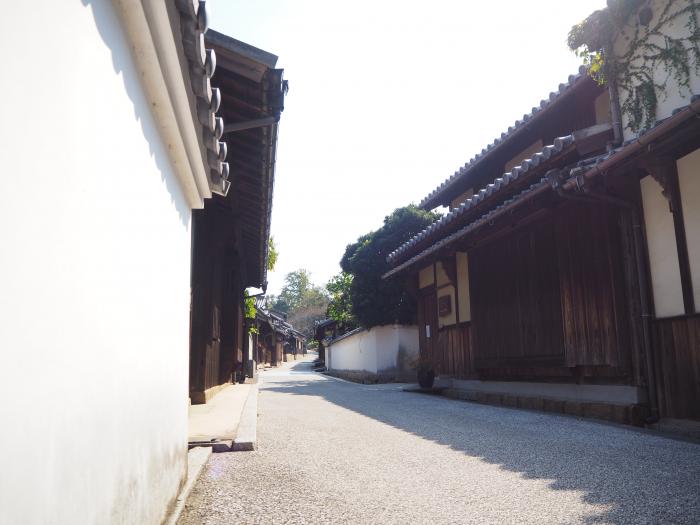 Honjima's history from when it was under the direct control of the feudal government, when it was a prosperous shipping industry, and other eras still remain in architecture, materials, and in the memories and stories of the islands' people, and it is the site of the autumn season Setouchi Triennale 2019. Enjoy tracing the history of the Shiwaku Carpenters while you tour around viewing the works of art for the festival to develop even stronger memories of Honjima.