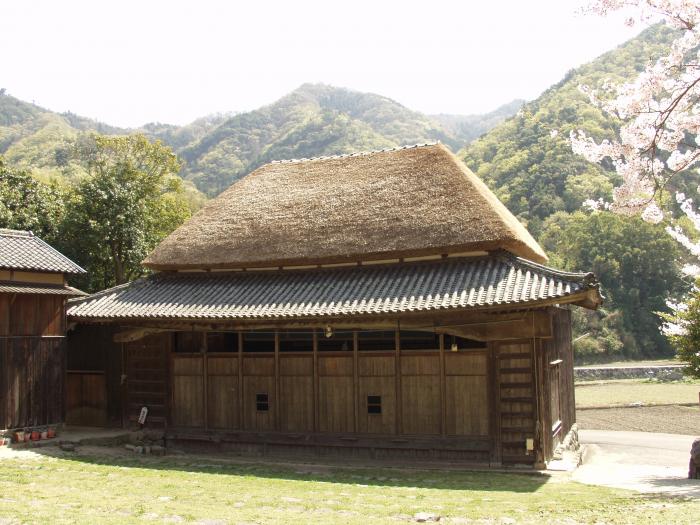 Kabuki. This bold and extravagant traditional theater has existed in Japan since the mid-1600’s, and still draws large audiences in Tokyo, Osaka, and other cities. Kabuki is also performed on the local level in some parts of Japan, including the island of Shodoshima. Here the villages of Nakayama and Hitoyama keep up this home-grown tradition, called “farmer’s kabuki.”
Normally kabuki is a professionally-run production. But once a year in May (Nakayama) and October (Hitoyama), islanders stage a local kabuki festival, taking charge of everything themselves—from acting to make-up, costuming, and accompaniment. Thanks to their dedication, farmer’s kabuki has been kept alive through the generations for over 300 years. Let’s take a closer look at the cherished tradition of these two villages. 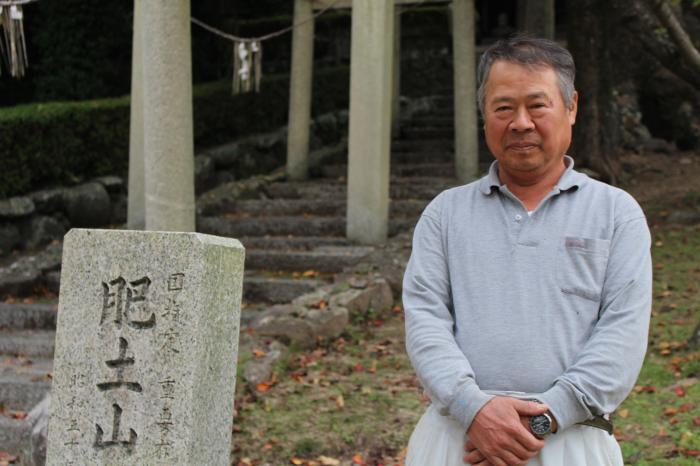 “Hitoyama’s kabuki tradition began about 330 years ago,” explained Ikuo Sasaki, chairperson of the Hitoyama Farmer’s Kabuki Preservation Society. Ikuo Sasaki made his kabuki debut at 9 years old. “In 1686, a new irrigation pond finally brought an end to Hitoyama’s water troubles. The villagers were so overjoyed at its completion that they put on their own kabuki show to celebrate, starting an island tradition in the process.
Kabuki was a relatively new and fashionable art in the capital (Kyoto) at the time, “but it seems it already had a following on Shodoshima,” he added. “Island exports such as soy sauce meant there was much travel and trade with the capital region (Kyoto/Osaka). Some believe that islanders, after seeing performances elsewhere, would recruit kabuki actors to come to Shodoshima and perform.”

Nowadays, the kabuki festival is held every year on May 3, on the grounds of the Rikyu Hachiman Shrine. The theater building is designated by the national government as an Important Tangible Folk Cultural Property, with its traditional tiled hipped roof, and adjacent annex of similar construction. The rotating stage and trap door are still powered by hand.

Each festival features four performances. “The dramas change from year to year,” continued Sasaki. “Next to the stage is a warehouse, where about 300 original scripts are kept. Out of those 300, we use about 20 to 30. In addition to the scripts, the warehouse has costumes, wigs, props, and all sorts of other things that we can use. The second performance of every festival, by the way, is performed by children, and that one is always the biggest crowd-pleaser.”
“Everyone is really into the preparation, and works to get their lines down quickly,” he added. But the most difficult is the particular “theatrical elocution.” It takes a lot of effort to perfect one’s delivery. “The precise delivery is not written down, but instead is taught orally, meaning each performance is slightly different.”
The people of the Hitoyama region have passed down from generation to generation the tradition of farmer’s kabuki, with the scripts, costumes, delivery patterns, and choreography that keep it alive. I asked Sasaki why people are so invested in the tradition.

“I think it’s still around because the people here want to protect it. We take what was given to us by our ancestors, and pass the torch to the next generation. It’s our calling, so to speak. Of course, acting and working behind the scenes is just plain fun, too.” 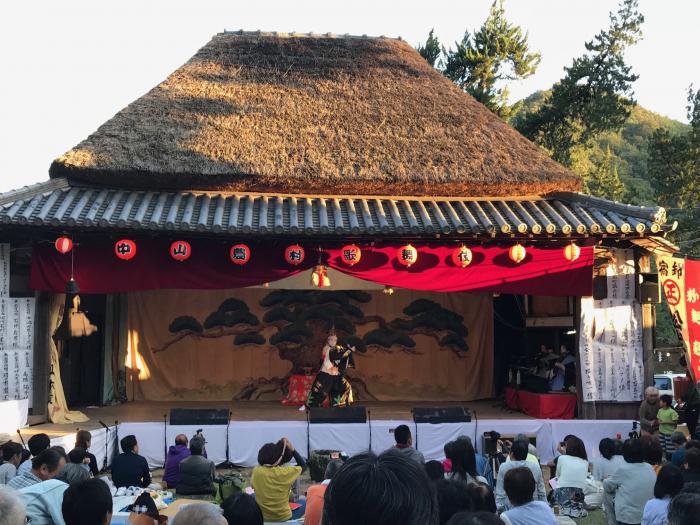 More than 700 terraced rice fields, known as the “Nakayama Senmaida,” put Nakayama on the map. Every October, the village puts on its farmer’s kabuki as part of the harvest festival at the local Kasuga Shrine. The Nakayama Stage, as it is known, is on the grounds of the shrine, just next to the rice terraces. The thatch-roofed structure is also designated as a National Important Tangible Folk Cultural Property. The theater building was constructed in the early 19th century, using the better-known Kanamaru-za Theater in Kotohira as a template. 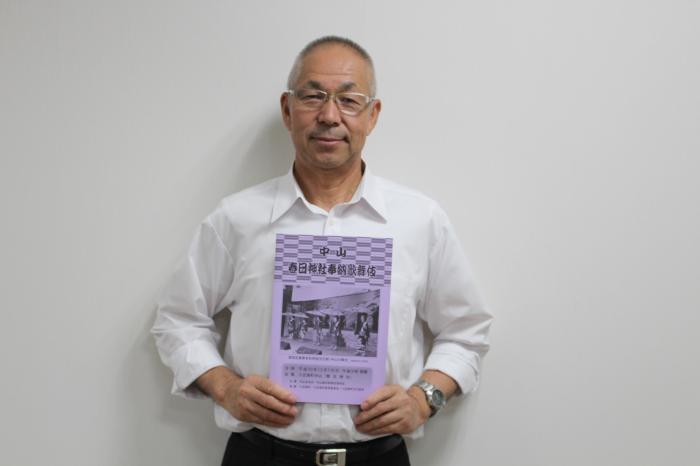 “I always get asked the same question: why did kabuki—which used to be more common all over Japan—persist in these two little pockets on Shodoshima?” said Tadashi Kubo, chairperson of the Nakayama Farmer’s Kabuki Preservation Society. “We’ll never really know, but I like to think that there were some really enthusiastic play directors in Hitoyama and here in Nakayama. These kabuki nuts, so to speak, took charge and kept the fire alive through the generations.” Kubo himself performed as an actor every year from 23 years old until becoming chairperson.

“Play directors long ago wrote many of the kabuki scripts we still store here,” continued Kubo, “but of the hundreds we have, only 20-25 can be performed. The scripts were originally written in a traditional cursive style, making them almost impossible to read nowadays. We rewrite and modernize the language of the ones we can make out.” This keeps the plays accessible for the each generation. 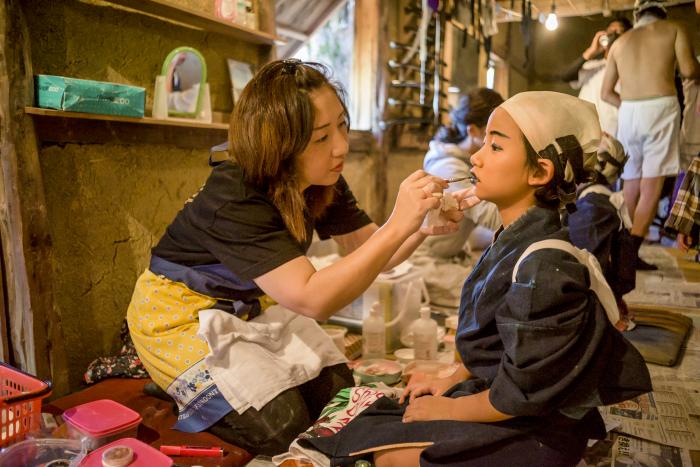 When it comes time for the performance, the islanders not only act, but also take on the roles of stage managers, make-up artists, instrument accompanists, costumers, and more. After the make-up artists finish with applying the correct coloring for each role, wigs are fitted, costumes are perfected, and the big show is on.
“Back in June,” Kubo explained, “we decide which plays to put on, and then go about revising the script. For children’s kabuki, the kids will start practicing for their roles in August, while they are still on summer break. When it comes to deciding on the roles, some children will choose parts that their older brother or sister acted the year before. When the younger sister comes home with parts she couldn’t get down, the older sister will help her out. By the time the next practice rolls around, she will be in much better shape. It’s the tradition of older coaching younger.” 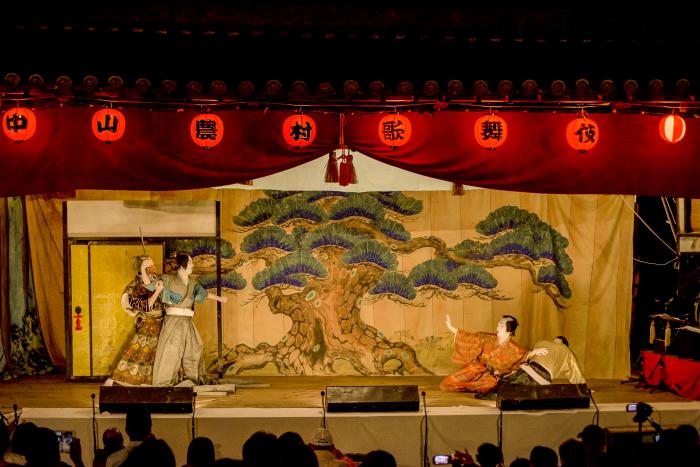 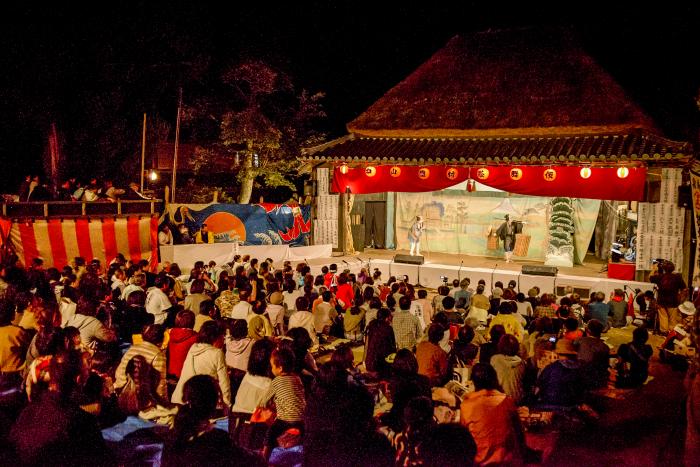 “When I was younger,” reminisced Kubo, “there used to be so many night stalls set up with food and games. As a child, it was one of the special chances each year to stay up and play into the night.”
He paused. “The actors on stage are the most visible—but they are just a small part. The people behind the scenes are vital to make the play possible. Everyone who has lent a hand through the years has helped keep the tradition going.” 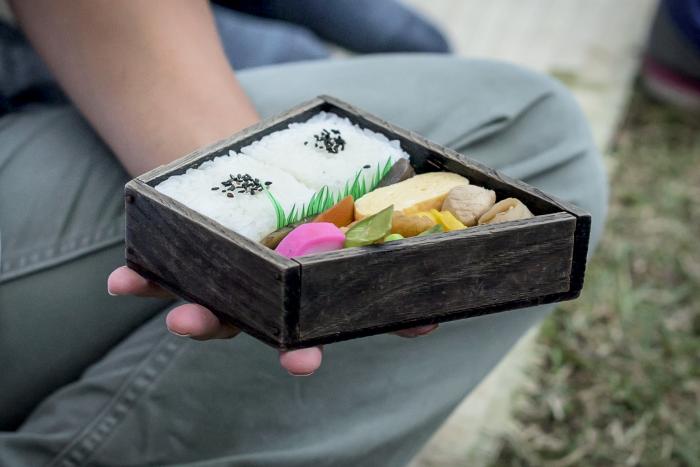 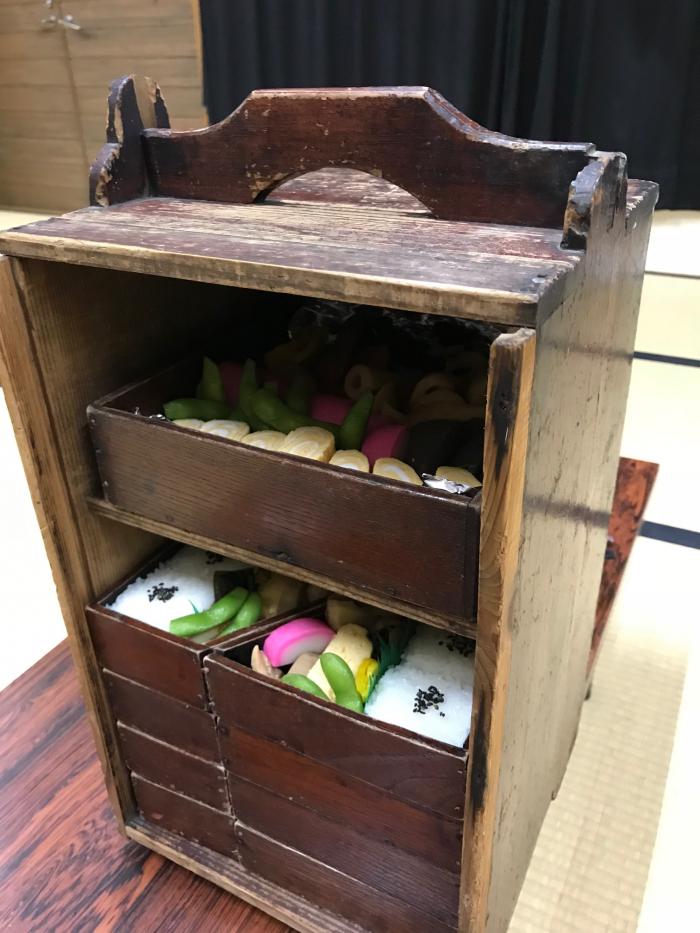 Shodoshima’s Farmer’s Kabuki has one other delicious tradition—warigo bento boxes. These specially-designed wooden lunch boxes nestle together into one large crate for easy carrying. “Most families in Hitoyama,” Sasaki explained, “own a set of warigo bento boxes. You can fit about 20 individual warigo lunches into a single crate, which is perfect for feeding the whole family plus other friends and relatives. In each warigo box you put in certain foods, like tsuki-meshi (hardened rice), maki-zushi (rolled sushi) and nishime (simmered vegetables). Boil some bamboo shoots to tuck in (perfect in the springtime), and the bento box is ready to go. One of the joys of kabuki is eating it while you watch the play.”
Kubo added that in Nakayama, the women of the Kabuki Preservation Society meet at 3 a.m. to make the lunches. “They make enough for the actors and everyone else behind the scenes—it’s a special lunch that people only taste once a year. They also use the just-harvested rice—from the senmaida rice terraces to be specific—for the hardened tsuki-meshi.”

Thanks to islanders’ dedication, farmer’s kabuki has been kept alive through the generations for hundreds of years. On the day of the kabuki festival, morning slowly turns to evening as the performances continue unabated. Old hands bring laughter with their ad-libbing, and children raise their voices for their annual debut.
Hitoyama’s Farmer’s Kabuki is on May 3, and Nakayama’s will be in early October. We invite you to come and be a part of these two traditions that islanders have cherished for generations.