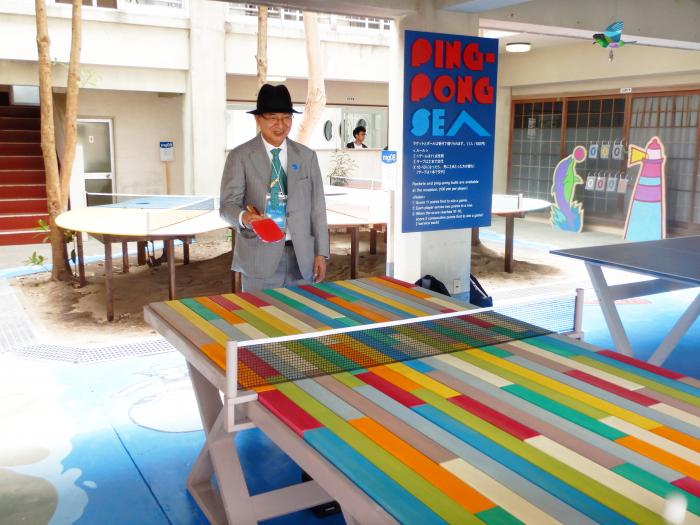 The Triennale opened with different styles of greetings by artists from 20 countries, and I was pleased to see their commitment to connecting with people in the local communities.

The Little Shops on the Island Project on Megijima looks great. The artists present a cluster of shops that liven up the island, such as a ping-pong parlor, a beauty salon, a café, a laundry, and a rest stop. These join existing works including a bonsai house, a movie theater, a botanical garden, and a restaurant. Once the shops become established, opening monthly or weekly, they’re bound to generate new possibilities, becoming a “little shop theme park” on the island.

I dropped in on Oshima as well. Accomplished artists Nobuyuki Takahashi, Seizo Tashima, and Fuyuki Yamakawa are joined this year by Tomoko Konoike, adding further depth and breadth to Oshima. The diorama produced by many volunteers under the direction of Kenjiro Kaneshiro is a stunning model of the sanatorium in spring around 1950 when there were as many as 700 patients living here. Konoike resurrected a hiking trail first made by the residents themselves in the 1930s and which they loved to walk along. It’s truly worth a visit. As I strolled along, I could see why making it revived their spirits. Japanese actress Keiko Takeshita was on the island to interview the residents so I went to meet her.

I also went to Naoshima to see architect Hiroshi Sambuichi’s The Naoshima Plan 2019 for which he renovated a stately old house, converting it into a rest stop. He used the village’s existing pathways for water and wind to create a very comfortable space.

April 24 I attended the opening of Shamijima and Uno Port, and in the evening I saw Kim Ito’s Dancing on the Radio. They were all great. From here, I’m off to Tsumari.