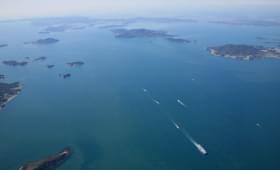 Restoration of the Sea

The Seto Inland Sea has been a vital transportation route since ancient times. Ships plying its waters stopped at different islands where their crew passed along the latest cultural and lifestyle trends. The distinctive local cultures that emerged through such interactions can still be found today.

The islands’ unique identities, however, are being eroded by the shrinking and aging of their populations and the region’s diminishing vitality which have accompanied the acceleration of globalization, optimization and homogenization. Through the Setouchi Triennale, we aim to revitalize island communities that once thrived within the spectacular setting of the Seto Inland Sea, a nexus of trade and cultural exchange, and transform this region into a Sea of Hope for the world.