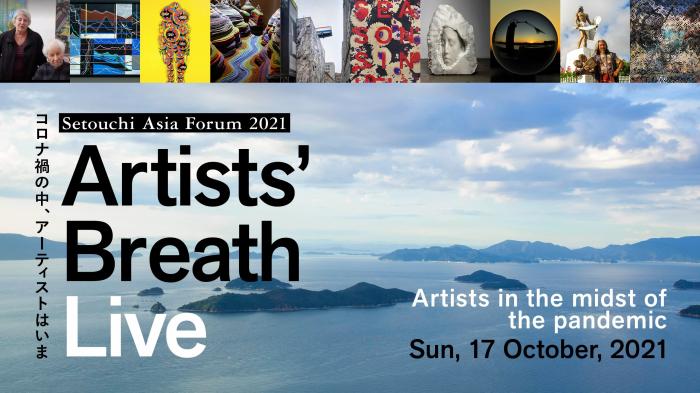 Over these one and a half years after the outbreak of the new coronavirus,
traveling, dining, gathering, and holding exhibitions have been restricted,
and the humanity that humankind had acquired over 20,000 years have been
lost. Despite being in such a difficult time, it gives us hope to hear from
artists who continue to think and create their artworks. The desire to
contact with art is growing stronger and stronger, and there has never been
a time when artists’ ideas and works have become hope.

The Setouchi Asia Forum was launched as a part of Setouchi Triennale 2016 in
hopes to create a platform for people from Asian countries and regions who
had been (or wished to be) involved in regional revitalization through art
and culture by sharing their experiences, learning from each other, and
discussing their ideas, in order to build continuous and sustainable
relationships. The 2nd edition of the forum was held in 2019, joined by 33
groups from 15 different countries and regions. This time, we would like to
expand the scope to all over the world and make it an online form in which
global artists participate. The Artists’ Breath Live consists of (1)
creation of a booklet composed of over 100 participants’ texts and its open
release to the public (2) live reports of 3-minutes each delivered online on
the day of the forum, showing the diversity of artists and the simultaneity
of the world. 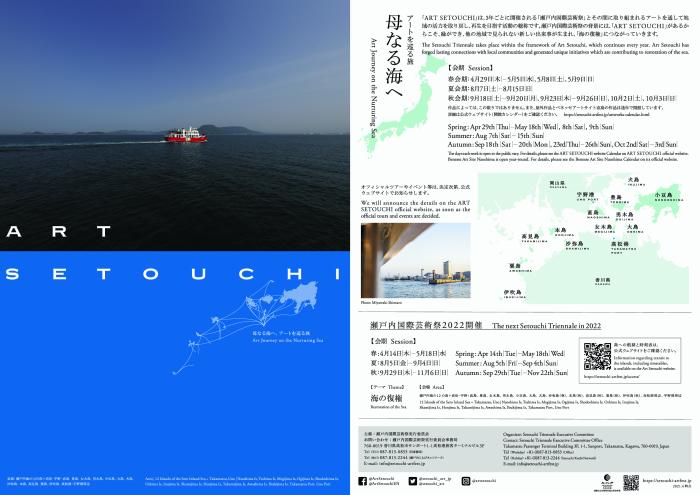 The Setouchi Triennale takes place within the framework of Art Setouchi which continues every year. Art Setouchi has forged lasting connections with local communities and generated unique initiatives which are contributing to restoration of the sea.

This is the notice of the opening status that ART SETOUCHI events and artworks. Some of the artworks will be open to the public. For details, please see the Artworks Calendar or the following related websites.

Thank you for the many submissions to the Call for Art Proposals for Setouchi Triennale 2022.
The screening process has been in progress since last October, while due to COVID-19, the schedule for the announcement of the Setouchi Triennale 2022 artists is delayed.
As soon as the completion of screening, we will make an announcement on this website, so please be patient. Thank you for your understanding.

2020.08.25 Payment of the Application Fee for the Setouchi Triennale 2022 Call for Art Proposals

Those who is planning to apply for Setouchi Triennale2022 Call for Art Proposals must prepay the application fee(JPY1,100 per each proposal).

※You can apply for a maximum of three plans per couple.
※Please be sure to attach a copy of your payment slip or PayPal payment completion screen to your submission.

Please go ahead the payment process.
↓