The islands of Megi and Ogi sit side by side and are joined by the same ferry to Takamatsu Port, a distance of just 4 km and 5 km, respectively. Up until 1890, these two islands formed an administrative cluster of 3 islands with Naoshima. They then became a separate village, finally merging with Takamatsu City in 1956.

Each island puts on its own summer festival, but they take turns. Ogi holds it one year and Megi the next. This year, 2018, the grand festival was held on Ogijima on August 5th, and I just had to go and see. 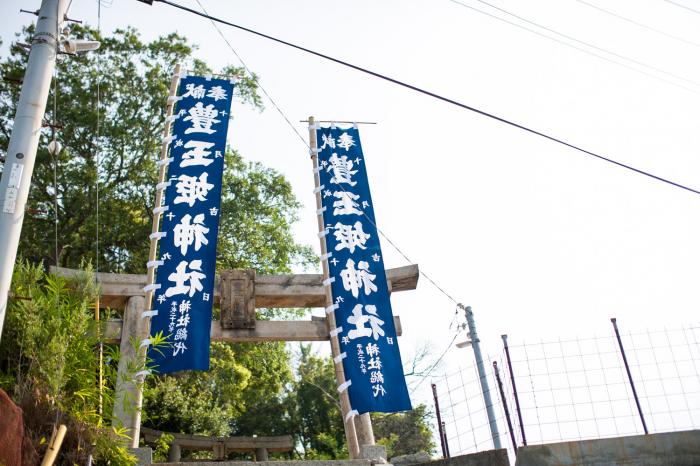 Under the hot summer sun, I climbed the steep steps with the villagers to Toyotamahime Shrine. There isn’t much room in the shrine grounds perched at the top of the hill, and soon everyone was rubbing shoulders in a friendly fashion. As the festival began, I glanced out to sea. Framed by the shrine’s stone gate, the little red and white ferry pulled away from the island. 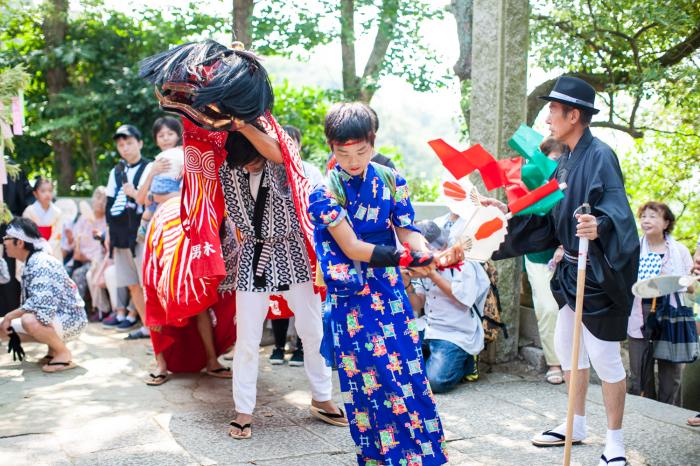 After Shinto rites were performed, it was time for the shishimai or ‘lion dance,’ which brings good fortune. Before the shrine stood two boys dressed in bright blue costumes and clutching ornamental drumsticks in each hand. Behind them crouched the ‘lion’—two men beneath a long, brightly patterned cloth, one of whom held the lacquered lion head. Was the lion asleep? To the beat of drums and the clanging of gongs, the boys raised their arms and swung their sticks. As they began to dance, the lion came to life. Its movements grew wilder and wilder, and the sound of camera and smartphone shutters filled the air. When the dance ended, the two men emerged from beneath their costume and were showered with applause. 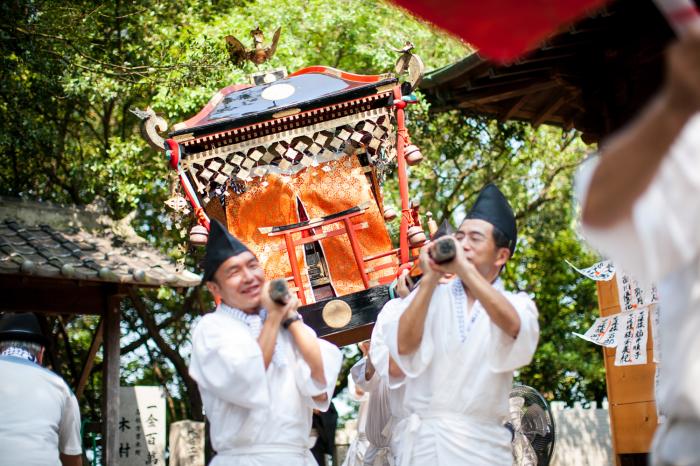 Next came a group of men bearing a portable shrine on their shoulders. They rocked it back and forth as they paraded before the shrine, and everyone lined up to duck underneath it. 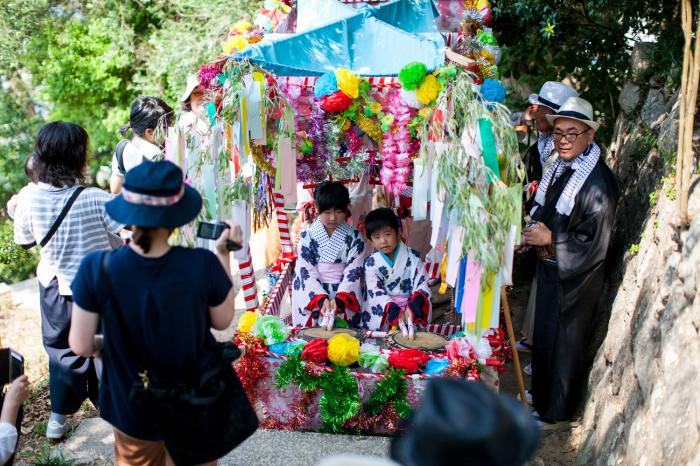 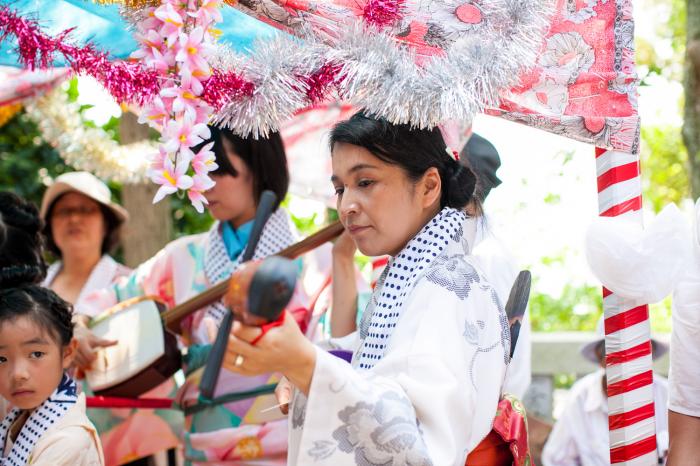 Meanwhile, on the steep steps leading up to the shrine waited a yatai or float. The villagers had decorated its rectangular wooden frame with colorful cloths and streamers. Slowly, it was carried up the steps. When it reached the top, two children sitting in the front raised their drumsticks and set a slow beat. Behind them, musicians dressed in summer kimono played the shamisen, while those walking beside the float sang.

During the wait for the float, different groups that included old-timers and newcomers alike entertained the crowd with songs and magic. Cheers and laughter rang from the shrine grounds. 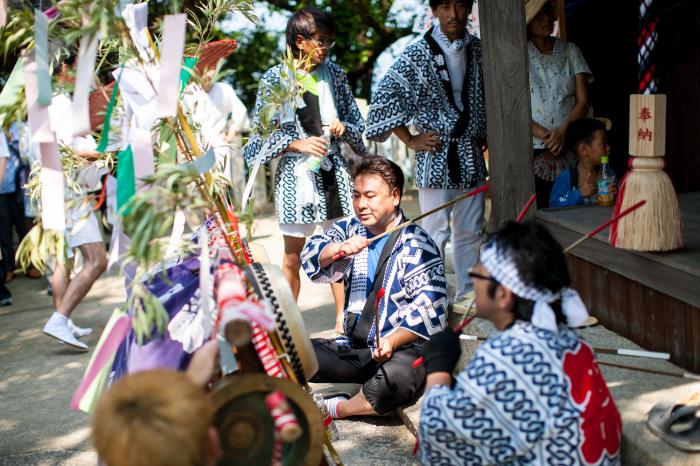 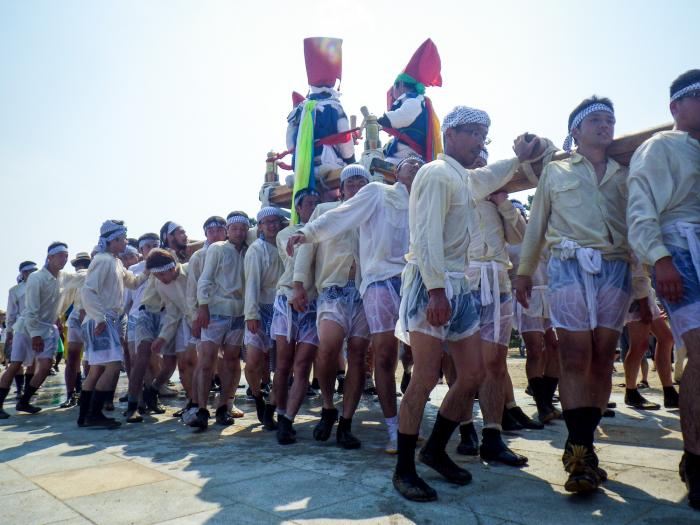 The Megijima festival features a large drum float called a dashi, which is borne by 20 to 30 men. On top is a platform on which four boys sit and beat a large drum. The island has its own distinctive beat for the festival, and the drummers wear bright red hats and long, colorful sashes that flow from their shoulders down their backs.

On the Sunday morning, Shinto rites are performed at Sumiyoshi Shrine, which is located on a small rise outside the village. The float is then paraded around the shrine grounds. The men raise it high into the air and roll it to one side, then upright again, then over to the other side, back and forth, in an exciting display that is a highlight of the Megijima festival.

After this, the drum float and a portable shrine are paraded around the village, and the float is rolled again at different spots along the way. Around noon, the procession reaches the swimming beach where the men take the float right into the water, much to the delight of spectators and swimmers. The four drummers riding on top never miss a beat, despite getting completely drenched. 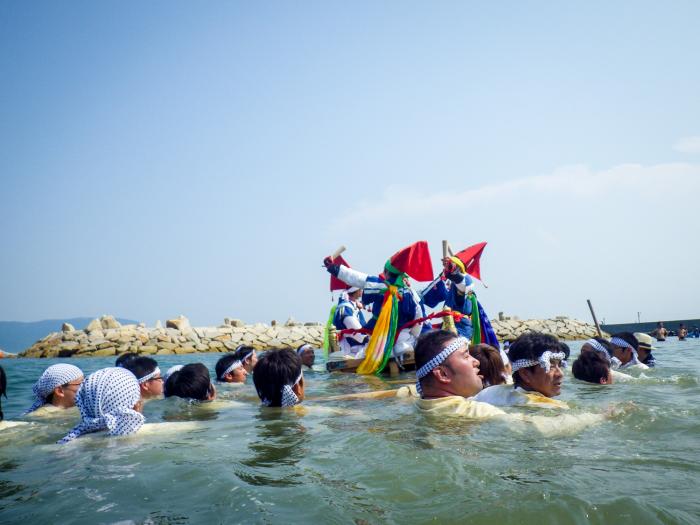 It is evening by the time the portable shrine and drum float return to Sumiyoshi Shrine. Once again, the float is lifted and rolled, and the fun lasts for quite some time, perhaps because no one wants the festival to end. 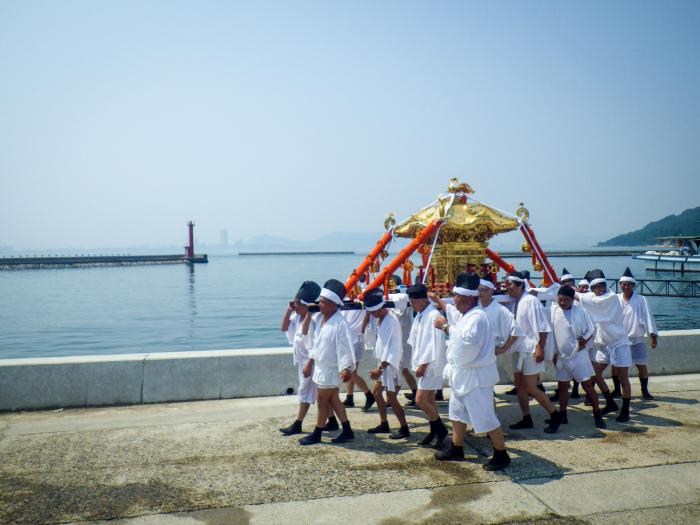 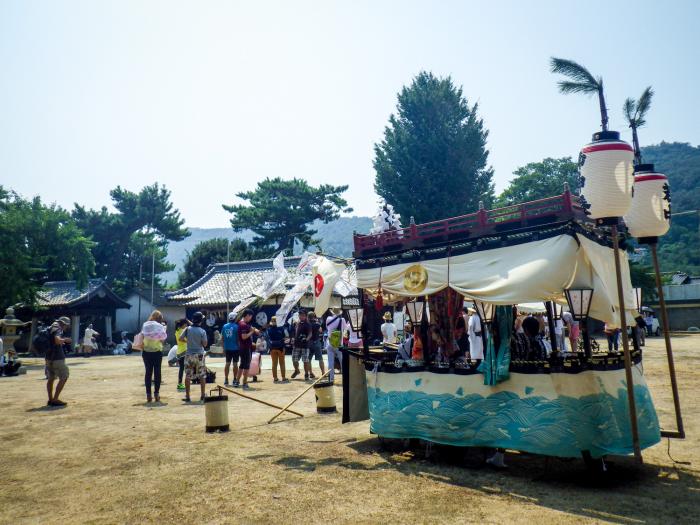 In addition to the drum float, a lion dance and yatai-style float also make appearances at the shrine as well as at the midway point. The lion dance is performed by two boys and two men. The boys are dressed in colorful costumes and headbands and bear an ornamental fan and a ladle. When the lion dance begins, they raise these up and down in time to the drums and gongs. The lion, which is sleeping at first, rises and matches its movements to those of the boys. The dynamic movements at the climax are greeted with enthusiastic applause.

Megi’s yatai-style float is decorated with cloth curtains and carries children dressed in summer kimono who play drums and gongs. People walking alongside sing in time to the music.

As you can see, the grand festivals on Ogijima and Megijima share some things in common, including the lion dance and the yatai-style float, reminders of ancient connection between the two islands.