Hop on the cute red and white ferry known as Meon at Takamatsu Port for the 40-minute ride to Ogijima.

The island’s picturesque village is perched on stepped terraces that climb the steep hill behind the port. The result is an intriguing maze of narrow lanes and stone walls, just waiting to be explored.

The first thing that greets you as you get off the ferry is "Ogijima’s Soul", a Triennale work designed by Jaume Plensa in 2010. This graceful building doubles as a ferry terminal and community space. The island women take turns manning the ticket office and kiosk. If you speak Japanese or have a guide, take time to ask them about the island, and be sure to pick up a map.

Pass through the big shrine gate behind Ogijima’s Soul to enter the village. Be prepared for some steep inclines as you wind upwards through the intricate web of lanes. Near the top of the village is Toyotamahime Shrine where women from many islands used to come and pray for safe childbirth. In the old days, Ogijima women gathered here for a chat in the evenings, bringing their own chairs. Sometimes, they still do. 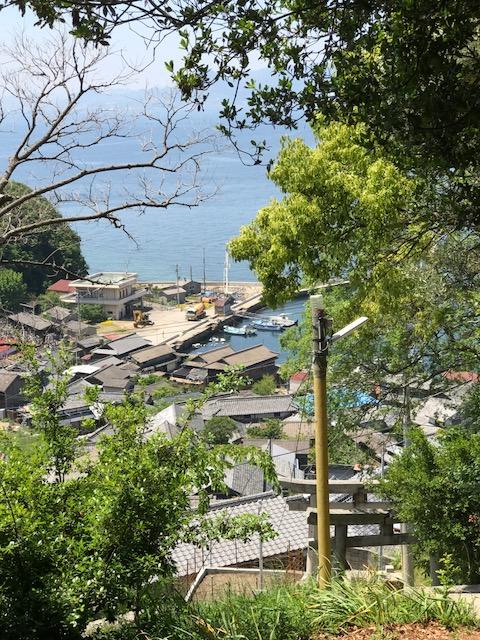 To enter the front of the shrine, you’ll need to tackle a staircase so long and steep, you’ll want to stop and catch your breath. Wait until you’re about half way up, then turn around…

…and enjoy the scenery framed by the stone gates you passed through on your way up. 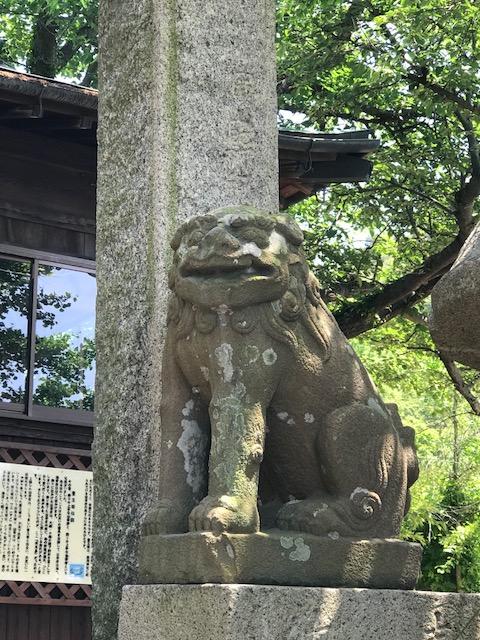 If you’ve made it this far, you’re almost there!

Before you pass through the third gate and into the shrine, pause to examine the lion-dogs guarding the gate on either side, but especially the one on the right.

It almost seems to be grinning at you and saying, “Well done! You made it!” 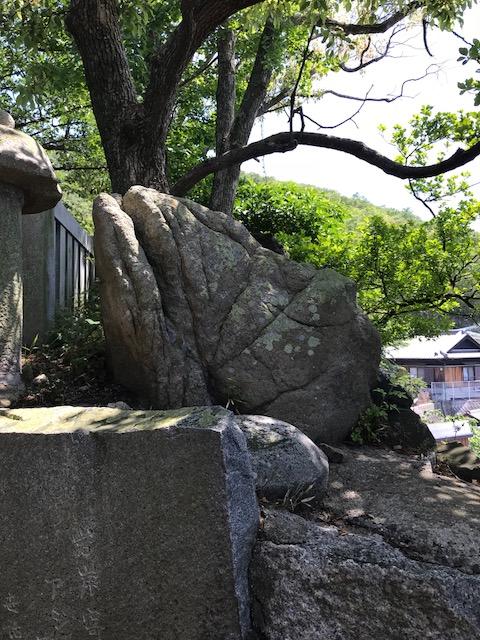 As you smile back at it in relief, check out the large rock beyond him. To a Japanese, it looks like the head of a fish called a longtooth grouper.

From the top, take a look back at the sea. The view from above will give you a good idea of what the island is like and what it’s like to live here. Then walk through the shrine grounds and out the back to enjoy a leisurely stroll along the village lanes. 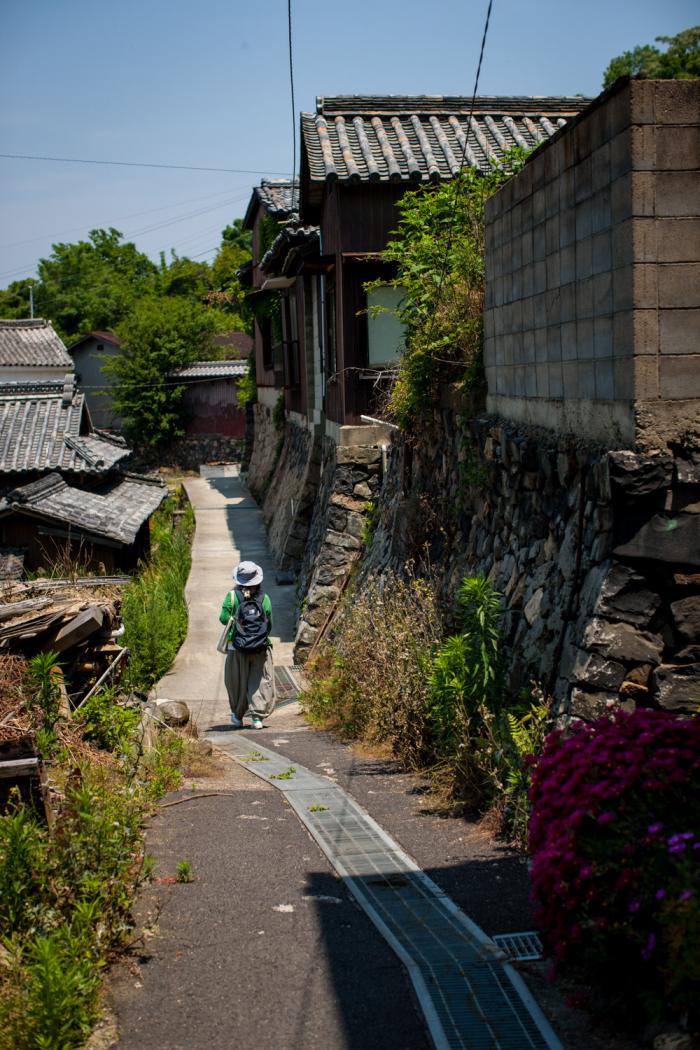 As the houses are built on terraces, you’ll find that the second floor or even the roofs of many houses are at eye level.

Tufts of grass sprout from some of the rooftops. With the Seto Inland Sea sparkling in the background, such spots make for a perfect shutter chance.

In fact, the island abounds with charming scenes that will make you pause to take a shot, such as the sea glimpsed at the end of a narrow lane.
It’s the same sea as always, yet somehow it looks different when framed by the quaint old houses.

As you wander about, heart and mind captivated by the beauty of this village that seems suspended in time, you may get lost in the labyrinth of lanes, but no worries.
When that happens, just head downhill. The port is bound to come into view as you near the sea. 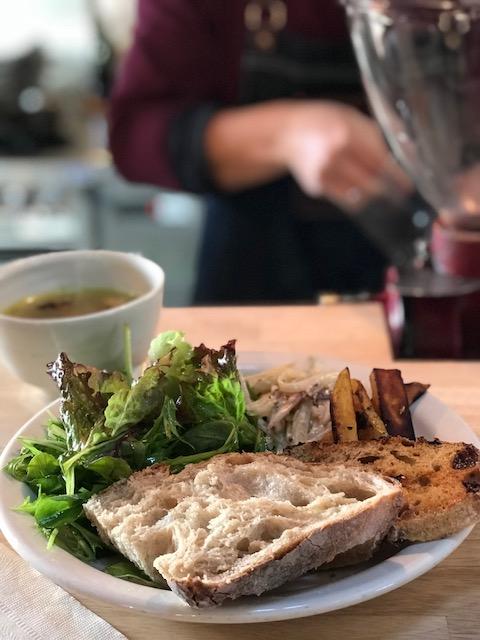 Exploring the village and making your own discoveries is fun. And it may make you hungry, too. If so, there are several options available.

A couple of restaurants run by long-time locals serve freshly caught seafood. There are also some recent additions, such as a café that displays the island’s ubiquitous onba (buggies) that have been transformed into art, a café serving light meals and barista coffee run by a couple who recently relocated to the island, and a little bistro offering delicious French cuisine. All of them use locally procured ingredients. Be sure to check if they’re open in advance, because hours are irregular.

The island also boasts a library started up by a couple who were drawn back to Ogijima by the Triennale. If you want to really enjoy the island at a slow pace, you might want to stay at one of the inns run by local fishermen. 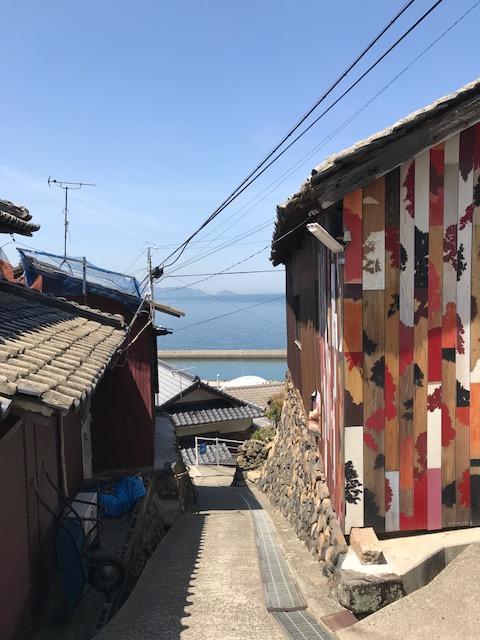 There are quite a few outdoor artworks that have remained permanently on the island. See if you can find them all as you explore.

"Project for wall painting in lane, ogijima wallalley" is a series of quirky wall murals made by Rikuji Makabe from planks of stenciled wood. Scattered about the village, the designs consist of silhouetted clips from the local scenery and are strategically placed to fuse with the sea and sky, creating a new village landscape. 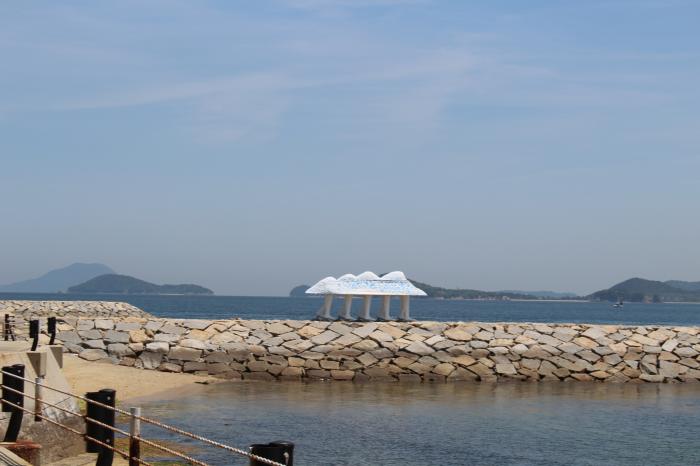 Near Ogijima’s fishing port stands "Walking Ark" by Keisuke Yamaguchi, which was partly inspired by the story of Noah’s Ark from the Old Testament. If you look hard, you can see this one from the ferry as well.

So why not come and explore Ogijima during the Triennale’s off-season and enjoy the slow island life?