“I could go to this school if you like,” my daughter said.
These words changed our family’s destiny. 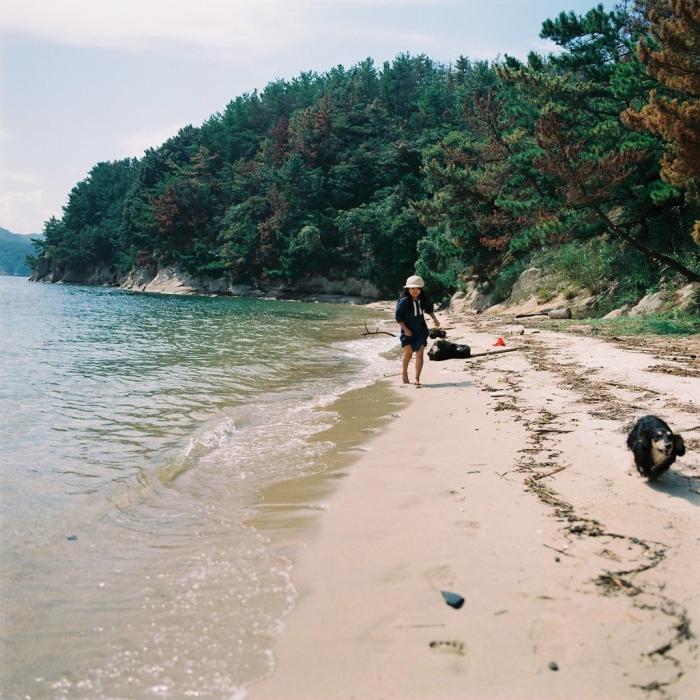 We live on Ogijima, a small island of just 1.34 km2. It’s a nice 40-minute ride from Takamatsu Port on a cute red-and-white ferry known as Meon. My name is Junko Nukaga-Fukui, and I run the island’s only library.

Viewed from the ferry, houses on Ogijima seem to cling to the steep hill, overlapping like fish scales. This is Ogi village where all the islanders live. According to the island’s registry, it currently has a population of 168 people. 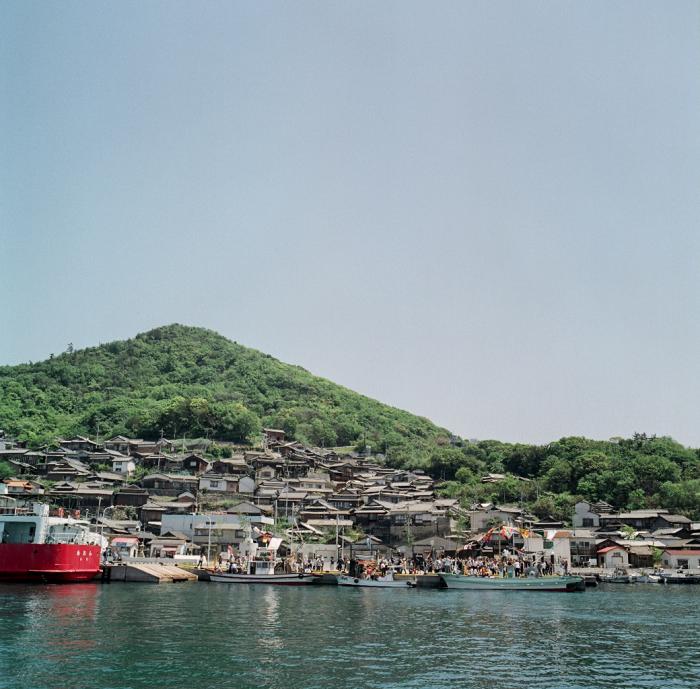 But getting back to what my daughter said. That was in the summer of 2013 when zero children lived on the island, and its only school had been closed. My husband comes from Ogi, and we were visiting as we always did during the holidays.

That particular summer, however, the defunct school had been reopened to house a Setouchi Triennale project by artists from The Group 1965. “Go Back to School and Start Over” was their slogan, and they transformed every classroom into an art experience. They also offered workshops. Our daughter, who was 10 at the time, loved these and went to the school every day.

That’s when she told us, “I could to go to this school if you like.”
“You do know there won’t be any workshops like there are now,” I told her.
“Yeah, I know,” she said.
“All right then. If that’s what you want,” I said.
And so our family decided to move to Ogijima. 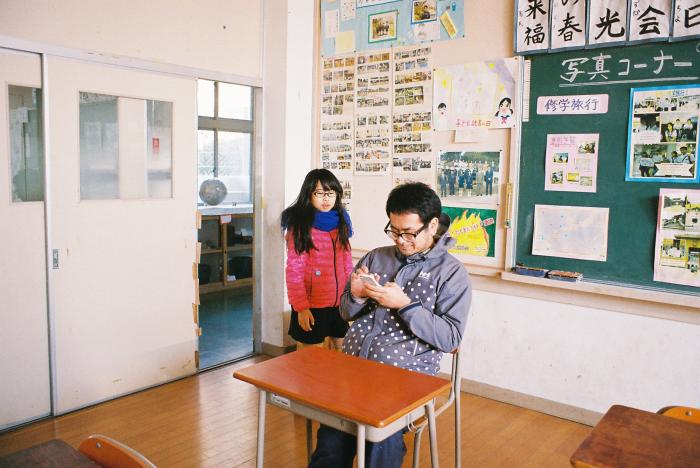 PHOTO: In the old school before it was replaced by a new, earthquake-resistant building.

We spent the rest of 2013 applying to have the school reopened, and in April 2014, our daughter began attending Ogi School, a combined elementary and junior high school. But this wasn’t a hasty decision precipitated by our daughter’s words alone. For many years, we had watched the rapid depopulation of the island that was once my husband’s home. Every time we visited from Osaka, the number of abandoned houses had increased, like scales falling from a fish, and we’d hear that someone else had died.

As a couple, we had discussed many times if there wasn’t something we could do to help. But no matter how much we might care about the island, it didn’t seem right for the two of us, who lived in Osaka and only visited during the holidays, to tell the people who lived here what they should do. And we couldn’t choose to live on the island either because it didn’t seem right to make our daughter move just to suit her parents. We felt torn and stuck.

In the end, it was our daughter’s words that gave us the push we needed. When the school reopened in April 2014, there were six new students, including her. But I told myself, “This isn’t the goal. It’s just the starting line.” I couldn’t afford to sit around just patting myself on the back. If I did, when these children graduated, the school would just close again, and that would be pointless. So what could I do? How could I help ensure a future for the school?

The answer? Build a library!

I suppose that sounds like a flaky idea, but that was the vision that came to me when I asked myself, “What do I really want to do? How can I contribute to the island by doing something I enjoy?” (That last part is very important, by the way.)

What if someone else wants to come and live on the island? I thought. What would they be concerned about? Of course, it would depend on the individual, but if I could create a place on this island that helped relieve my own concerns, it might make it easier for other people to live here. A place for people to study, a place to communicate with the islanders, a place to get the information needed to move here, such as where there are empty houses.
And more than anything else, a place that shows that we, the people who live here now, are doing what we really want and enjoying it, too!

After moving to Ogijima, it took two years to realize this dream, including finding and renovating an empty building. Ogijima Library opened in 2016. And that’s not all, the nursery school reopened the same year! It’s now 2018, and in the last four years, 40 people have relocated to Ogijima. 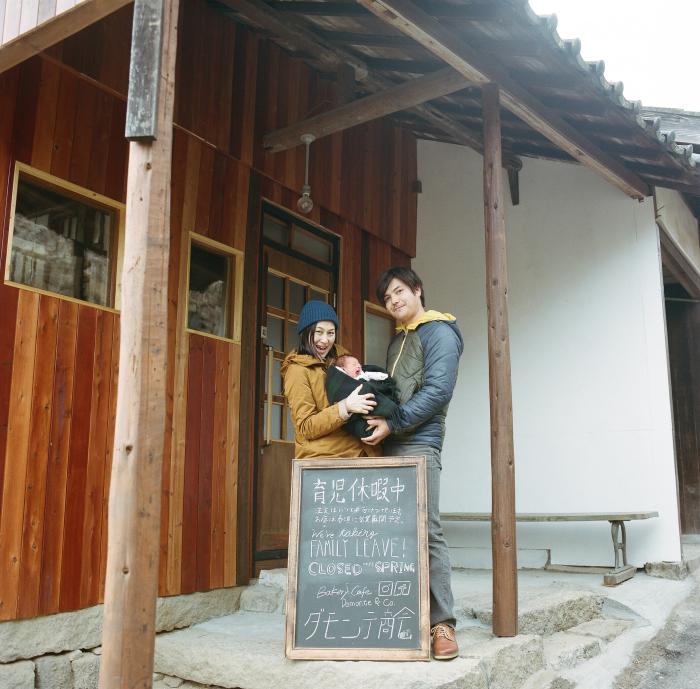 PHOTO: The Damonte family outside their home after Nagi’s birth.

I put up a notice in the library, inviting people to make inquiries if they were interested in relocating to Ogijima. Two years ago, Kaisho and Yuko Damonte happened to see it and started asking. As a result, they moved to the island and, last winter, opened a café. They’re world travelers, and their café features coffee beans they’ve selected during their travels, along with fresh-baked loaves of crusty bread and delicious desserts. Of course, people are drawn to the café for the great food and coffee, but since their son Nagi was born this year, it’s also become an oasis for the island women, who dote on him. 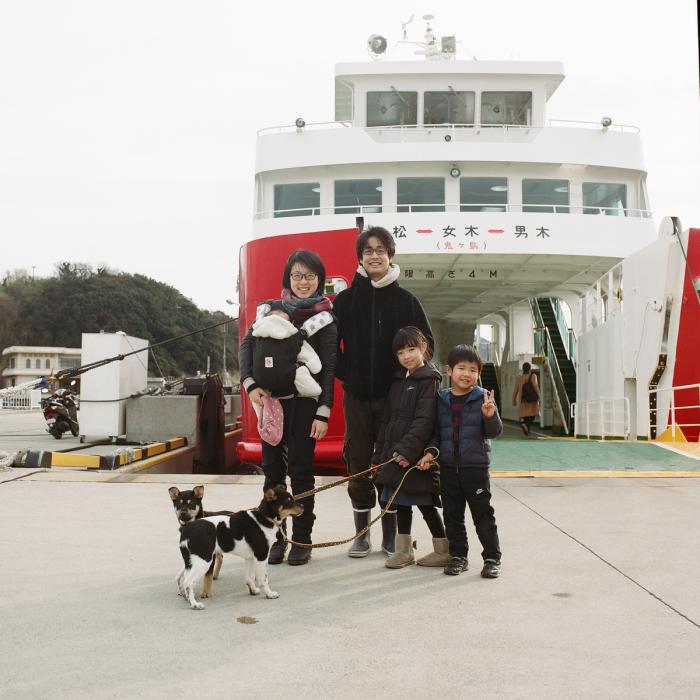 Three years ago, the Nishikawa family came to help us build the library and ended up moving from Bangkok to Ogijima. When they first came, they had two children, but now their family has grown to three children and two dogs, a big family for this island. This summer, they played a key role in organizing an international IT event run entirely by volunteers. It attracted about 250 people to Ogijima.

There are so many new residents that I can’t possibly introduce them all. A hairdresser, a fisherman, employees at the school and nursery school. There’s great diversity in the ways that people put down roots on Ogi. Each one of them is creating or discovering their niche on the island, and everyone contributes to building this community, regardless of whether they were born and raised here or moved in from somewhere else. This is what makes Ogijima feel so rich—the development of community through the process of people simply enjoying what they’re doing. Rather than being just one big circle, the community consists of many smaller overlapping circles emerging within the larger one. That’s an indicator of the local community’s capacity to embrace diversity.

When we told the islanders that we wanted to reopen the school or shared our plan of starting a library, not one of them rejected these ideas. Some of them asked anxiously, “Are you sure you can do it?” but that was because they were worried for us. Others said, “I don’t read books, you know,” but still showed up to borrow books once the library opened. That’s what the people here are like: endearing and open-minded.

Ogijima, a community that has taken charge of its own development and through this, has come to embody the Triennale theme “Restoration of the Sea”.

In March of next year, our daughter, whose words helped move us here, will graduate from her last year at Ogi School. No longer concerned about the school being threatened with closure, we’re actually wondering if there will be enough classrooms. The Triennale was like water poured on a dormant seed. Born and watered on this island, the seed sprouted and grew, bearing new seeds.

In 2019, Ogijima will participate in the fourth Setouchi Triennale. New water will be poured, and new seeds will grow. Art has breathed new life into this island, and I have faith that the encounters the Triennale offers, and the values it fosters, will nurture Ogi’s children.