Of the twelve islands participating in the Setouchi Triennale, Ibukijima is located the farthest west. The word 息吹 (ibuki) in Japanese means “breath.” Air used to bubble up from the sea bottom nearby, and the name Ibukijima means “breathing island.” At least, that’s one explanation for it. The Japanese characters have since been changed to 伊吹, which means Chinese Jupiter.

“Ibukijima is the product of an underground volcano,” says Kanemitsu Miyoshi. He operates a sea taxi while serving as the representative of the Ibukijima Research Society. That makes him the perfect person to fill me in on the island’s history. From his boat, he points out red and white stripes in the cliff’s strata which reveal the island’s volcanic past—the red stone was once lava and the white sand was once ash.

“Because the island was formed by lava, there are no natural springs,” he tells me. “We often suffered from water shortages.”

“Ibukijima had seven wells, but when the population grew after World War II, they sometimes ran dry, and water had to be brought in by boat. It’s amazing that everyone wanted to stay here despite the lack of water. It just goes to show what a great fishing spot it is.” A visit to the Ibukijima Folk History Museum is a great way to delve further into the island’s past. It’s open year-round, and admission is free!! The wooden building in which it is housed was formerly Ibukijima Kindergarten. In 2013 and 2016, it also housed works produced for the Setouchi Triennale. The inner courtyard has been planted with fujibakama (thoroughwort) to provide a rest stop for chestnut tiger butterflies, which migrate an astounding 2,000 km. Stepping inside the museum, I find the corridors and classrooms filled with intriguing exhibits. The first room is devoted to fishing, and all the equipment and documents related to that pursuit. Ibukijima is famous throughout Japan for its anchovy industry, but in the past, sea bream fishing also thrived here. On display are oars from boats used several centuries ago, sticks used to communicate from ship to ship before the invention of radios, and photos of how the islanders used to sun-dry fish fry. It’s clear that fishing is integral to the lives of the islanders.

These days, fishermen take the day off when a strong wind blows, but in the past, they used the wind and tides to propel their boats. A good stiff wind meant a good day for fishing. Even though the boats were only powered by oars, the trip to Osaka and back took the islanders just two days, and they frequently traveled back and forth to trade or to make extra income as migrant workers. On their return, they brought back cultural features of the Kyoto-Osaka area, traces of which still remain on the island. The room next door is dedicated to farming as well as festivals and other folk customs. It also presents some cultural remnants from Kyoto in the form of the local language. Ibukijima is believed to be the only place in Japan where accents spoken in the Heian (794-1185) and Kamakura (1185-1533) periods can still be found. According to my guide, Mr. Miyoshi, one example is the use of おまえ (omae), a word used only by men to mean “you.” In the rest of Japan, the word is considered rude unless used between peers who know each other well or by someone of higher social status towards someone of lower social status. On Ibukijima, however, it is used to show the highest form of respect, just as it was long ago. Mr. Miyoshi thinks that ancient ways of speaking may have survived intact here because people tended to marry other islanders rather than outsiders. The next exhibit concerns debeya. This literally means “outside room,” but it was actually a building with six separate rooms that served as a sort of community postpartum recovery ward. In the large hall at the back of the museum, Mr. Miyoshi has built a model using materials from his own house. In it are arranged swaddling blankets along with baby kimono and cloth diapers, which Mr. Miyoshi asked the island women to make especially for this display. 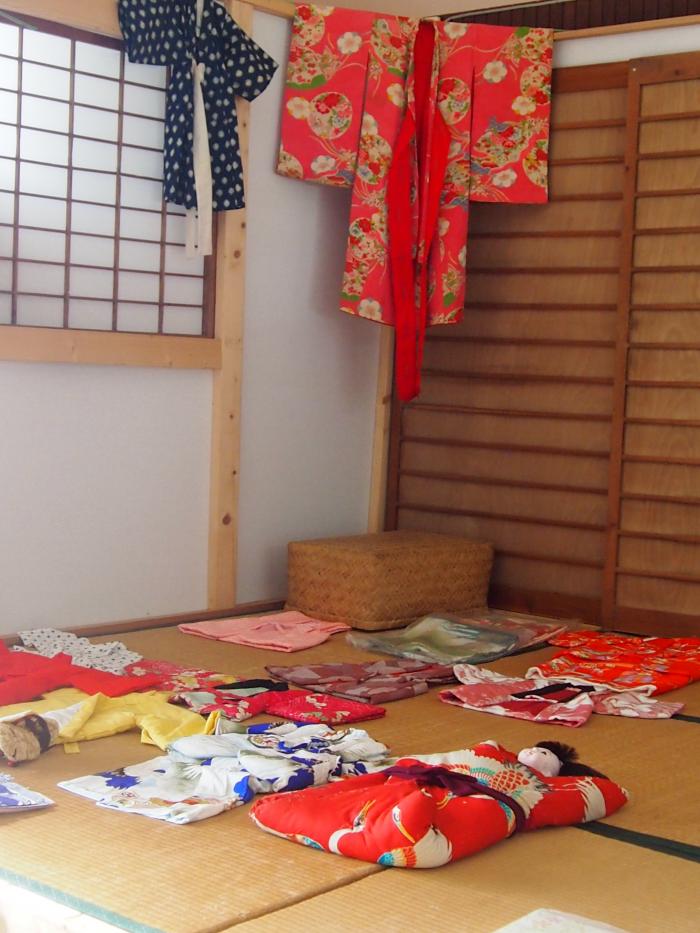 The islanders believed that blood was unclean and that just the sight of it could result in a poor haul of fish. When women had their period, they ate their meals separately, and when it was time to give birth, they delivered their children in the storeroom of their home. After delivery, mother and baby moved to the debeya where they stayed for the first month after childbirth along with other mothers and babies. Men were banned from entering. “I spent the first month of my life here, along with other kids who later became my schoolmates,” Mr. Miyoshi told me.

Mothers who stayed in the debeya were exempted from all housework except sewing. They spent most of their time looking after their babies. Clearly, the custom of segregating mothers for the first month must also have been aimed at giving them a chance to recover from childbirth. Other islands in this area also had debeya, but the one on Ibukijima was turned into an obstetrics and gynecology clinic in 1930 and remained in use until 1965.

Once married, women on Ibukijima had little opportunity to travel anywhere. It was therefore the custom to send unmarried women on a group pilgrimage of Shikoku’s 88 temples, a journey of about 1200 km. Often women who had been fellow pilgrims gave birth around the same time, so that the debeya was a place for deepening bonds of friendship and for sharing knowledge about childrearing. This custom of nurturing the bonds among local women created an environment in which the whole island supported each child’s development. 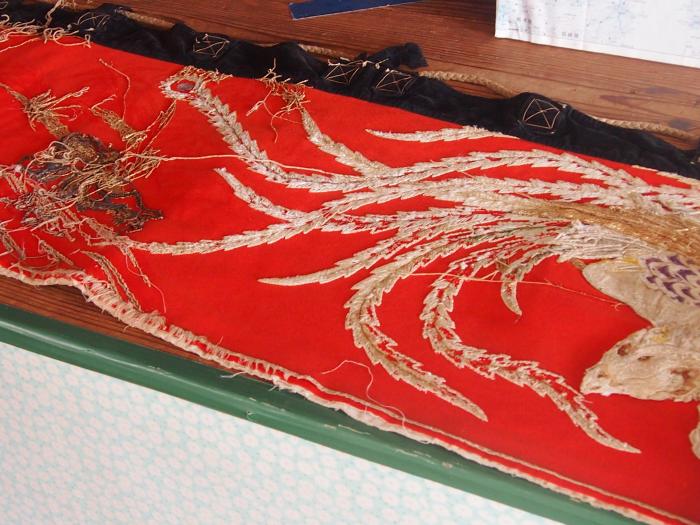 Ibukijima’s autumn festival features three large drum floats that are paraded through the streets. Part of the island’s very first float, which dates back to the 18th century, is displayed in the museum’s large hall. The islanders bought it in Osaka and brought it home by ship. “This is part of the decorative cushions that adorned it,” Mr. Miyoshi says. “You can feel the washi paper inside.”

A bright red nishijin cloth embroidered with phoenixes and dragons belonged to the island’s second drum float, which dates back to the late nineteenth century. As nishijin silk brocade was a luxury item, this float was probably quite opulent, and Ibukijima must have been very prosperous to afford it.

A few years ago, a record of where the drum floats were purchased was discovered inside one of the floats. The names of the stores, one of which was the forerunner of modern-day Mitsukoshi, testify to the island’s connection with the Osaka-Kyoto area. Beside this display, a large votive picture grabs my attention. Donated to Ibuki Hachiman Shrine around the end of the nineteenth century, it depicts the capturing of a whale, which was a very rare occurrence. The whale sends up a spray of water as the men encircle it with their boats.

After World War II, the room in the shrine where votive paintings were displayed was turned into a classroom to accommodate the island’s booming population. The children, however, were frightened by the pictures, most of which were therefore burned. Only a few survive, including this precious specimen in the museum. “Some of us took the pictures home before they could be destroyed because they were donated by our ancestors,” Mr. Miyoshi tells me.

Most of the artifacts in the museum were discovered in homes and storage sheds when they were being torn down. “What you see here are things collected privately by Mr. Kubo, a native of Ibukijima who taught at the local elementary school. This museum was made with the cooperation of all the islanders.” Until recently, no one had an accurate overview of what existed in the collection, but with the cooperation of Kagawa University, a database was made last year.

Perhaps you associate the word “museum” with something dry, fusty and scholarly, but I guarantee you that this one is quite different. Made by the islanders as well as by fans and supporters of Ibukijima, it conveys their love for the island. 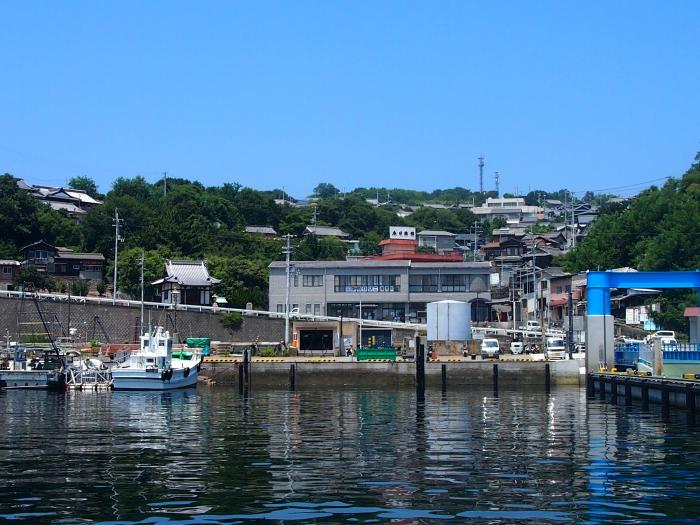 Ibukijima will participate in the fall session of Setouchi Triennale 2019, and I encourage you to drop by the Ibukijima Folk History Museum when you come. Don’t forget to take time to listen to the stories of the islanders, too. After all, that’s the Triennale’s true charm—the opportunity to learn about and experience the local community through art.