It all started about 200 years ago when wild pine trees were first potted and sold as “bonsai”. Now, Kagawa Prefecture has become famous for the production of pine bonsai. During the 2016 Setouchi Triennale, bonsai craftsmen and artists inspired by “bonsai” captured the beauty and charm of this art form in a collaborative exhibition held near the shores of Megijima Island.
(“feel feel BONSAI”Masashi Hirao x SETOUCHI COGEIZ / Kagawa Prefecture Bonsai Products Promotion Council). 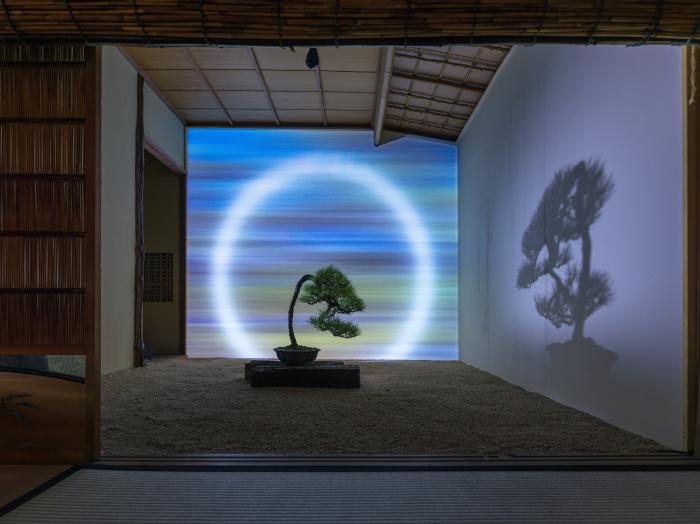 The Kinashi and Kokubunji regions on the west side of Takamatsu, Kagawa Prefecture, are known as the birthplace of bonsai, and have the top share of the national market, producing over 80 percent of the pine bonsai in Japan. These bonsai are loved the world over, and are exported internationally to Europe and Asia.

The Kinashi and Kokubunji regions have a unique way of growing bonsai. Bonsai craftsmen raise bonsai from seedlings, and care for them over many years. Only in these regions will you find rows of pine trees of all shapes and sizes planted in the fields instead of vegetables. Currently, there are about 60 bonsai gardens operating in Kinashi and Kokubunji. I visited one of these gardens, “Hiramatsu Seijuen bonsai garden” in Kokubunji, to speak with its owner, Kiyoshi Hiramatsu. 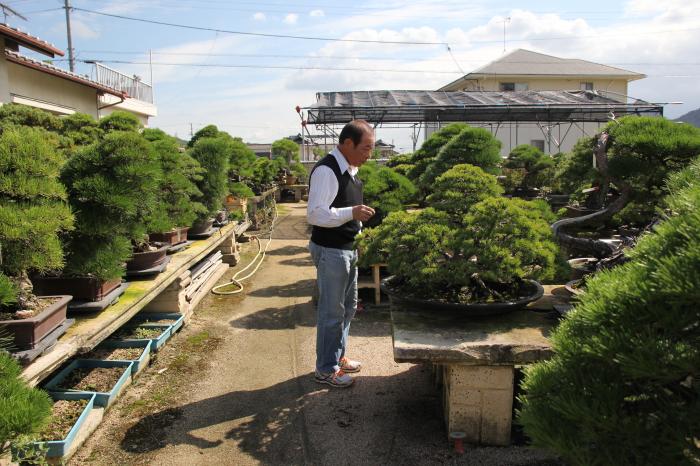 Mr. Hiramatsu explained to me that pine bonsai were first produced in the Kokubunji region around 1887. At that time, the main agricultural crops were rice and wheat, but pine, plum and cherry tree saplings were grown as well. With the granite in the surrounding mountains contributing to good soil drainage, and the lack of rain in the Seto Inland Sea region, growers were able to produce small pines with comparatively thick trunks, which are ideal for bonsai. These pines were potted and shaped into bonsai works of art. Also, a rare variety of Japanese black pine, the Nishiki Pine, which can be found growing in the mountains of this region, fascinated people with the way its bark cracked and split into wing-like shapes, resulting in a bonsai boom that lasted up until the 1980s. During this time, pioneers who were passionately involved in bonsai production in the Kinashi and Kokubunji regions developed a variety of techniques that would become fundamental to the art form as it is known today. In this way, Kinashi and Kokubunji developed into bonsai producing regions.

Mr. Hiramatsu is a third generation bonsai craftsman. Mr. Hiramatsu, who was born in 1949, remembers using the pines growing on the nearby mountains for firewood. Pine was prized for its slow burning properties, and the stumps that remained after the trees were cut for firewood were ideal for bonsai. Mr. Hiramatsu’s grandfather started the bonsai garden while working a variety of jobs to make a living, followed by his father, who also became a professional bonsai craftsmen. For Mr. Hiramatsu, inheriting the garden, which had been in his family for three generations, felt like the natural thing to do. Before Mr. Hiramatsu graduated from high school, his father sadly passed away. Prior to his passing, however, his father told him, “I want you and your older brother to take over the bonsai garden”. Mr. Hiramatsu took his father’s parting words to heart, and followed in his footsteps to become a bonsai craftsman. 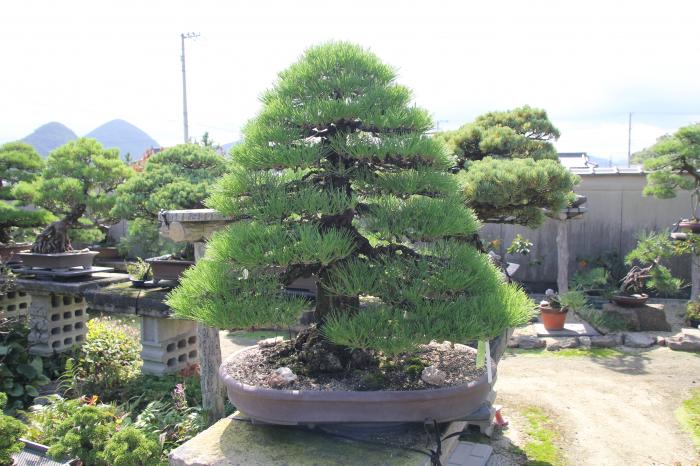 In the world of bonsai, there are craftsmen who specialize in raising saplings, while others excel at training and shaping the trees. Mr. Hiramatsu’s expertise is the art of training bonsai. “Training” a bonsai involves pruning and using wires to guide a potted pine tree into a desired shape.
The way in which bonsai are grown differs depending on the species of the tree, but there are certain steps that apply to all varieties of bonsai. For example, in spring before the trees begin to bud, they are replanted and neatly pruned. In June, old buds are trimmed to encourage the sprouting of new buds. When I visited Mr. Hiramatsu in October, the season for removing old leaves, he was caring for a black pine over 100 years old.
“This black pine will be displayed in a bonsai exhibition. Ideally, all the needles should be growing upwards, so I am carefully removing any needles that have turned brown or are facing downwards with these tweezers”, Mr. Hiramatsu explained. 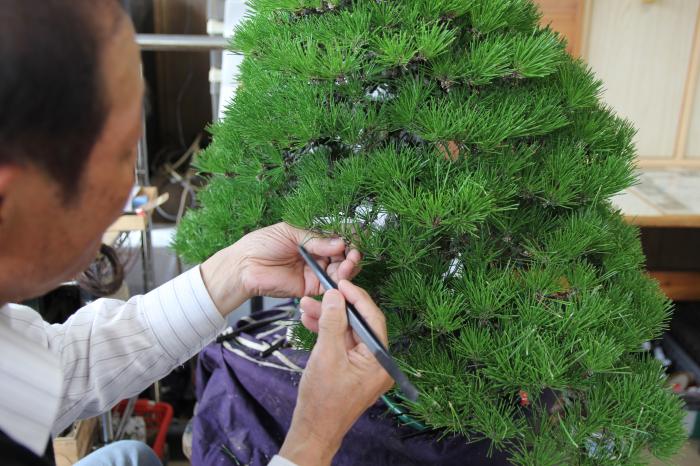 In the center of his work space, I saw a Yamagaki bonsai (a type of Japanese persimmon tree) adorned with a single red berry.
“I raised this one from a seed and shaped it into a bonsai. While it was still small, I used wire to curve its trunk and stretch it to the side. At first, I thought it would be nice for it to have around three berries, but because its trunk is thin, I decided that only one berry would be better. I have been growing this bonsai while keeping in mind the shape of the tree, the number of berries, and so on.”
Talking with Mr. Hiramatsu, I truly feel that bonsai craftsmen are creating the beauty of nature itself. 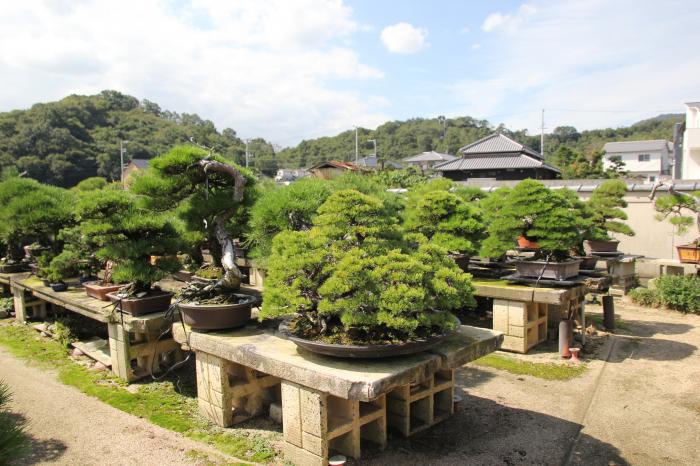 Outside in the garden, a variety of bonsai, big and small, are lined up in rows.
“Bonsai with berries, like the Yamagaki permission, grow faster compared to other trees, so I’ve raised them from seeds before. But there are also many bonsai that have been passed down from generation to generation. There is even a black pine that is thought to be over 200 years old.”

Saying this, Mr. Hiramatsu showed me a black pine bonsai with a winding trunk that grew off to the side. The pine needles on the tip of its longest branches stretched below the bottom of its pot. I could tell that it had been alive for many years by the way its trunk had turned white near the roots.
Even though the base of the tree appeared to be dying, its black trunk and bright green needles appeared full of life and vitality. Looking at this tree, I realized that with time, effort and careful pruning, bonsai can live for a very long time.

I asked Mr. Hiramatsu, who spends every day busily pruning his bonsai, to tell me what attracts him to the art.
“It’s important to keep a close eye on the condition of the tree, and make decisions based on what you see. Take watering for an example. They say it’s best to water once a day in the spring, and twice a day in the summer. But if the soil is moist, that means the tree isn’t thirsty. In that case, it’s best not to water it. There is an important lesson to be learned in creating bonsai. Caring for the trees, I’ve often felt that bonsai teaches us about life.” 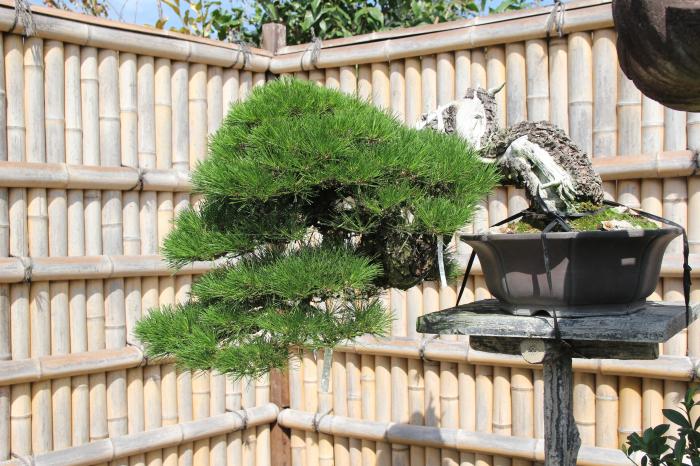 The Setouchi Triennale has always strived to discover the charms of the islands and develop site-specific artworks that “utilize what already exists to create new value”. The 2019 Triennale will be better than ever with the addition of various special projects. One theme for these projects is “Setouchi Resources x Artists”. Focusing on specialty products of the Seto Inland Sea, artists will develop experiential works that will allow visitors to delve deeper into life on the islands.

“BONSAI x Setouchi Resources x Artists” is an example of this kind of project. I will be looking forward to seeing what comes from the collaboration between artists and the local products of the Seto Inland Sea.