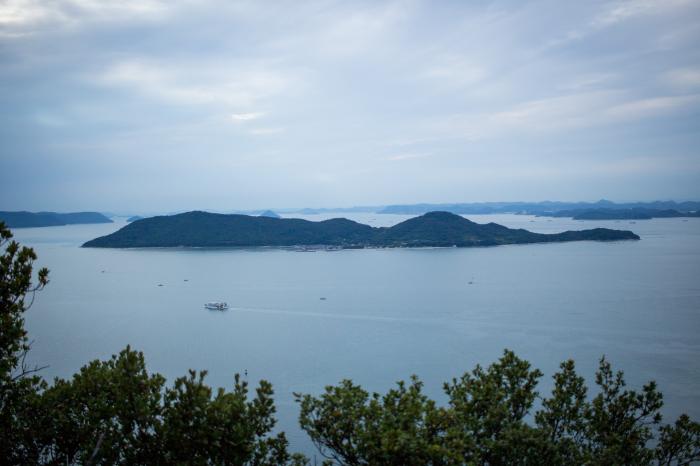 The other day I hopped on the cute red and white ferry to Megijima, an island just 4 kilometers north of Takamatsu Port. 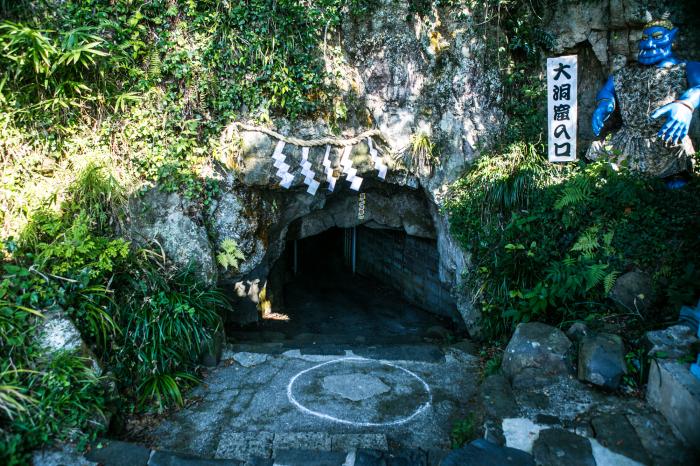 Megijima is also known as Onigashima or Ogres’ Island, and some claim that it was the stage for the Japanese folktale “Momotaro” (Peach Boy), a story in which a boy born from a peach vanquishes a hoard of ogres. Near the top of Megijima’s highest peak, Washigamine (188 meters), is a huge cave about 400 meters in length that covers an area of about 4,000 square meters. Chisel marks on the walls suggest that it was made by human hand, and some people speculate that the ogres in the Momotaro tale were actually pirates who raided villages along the Seto Inland Sea and made their headquarters in this cave. 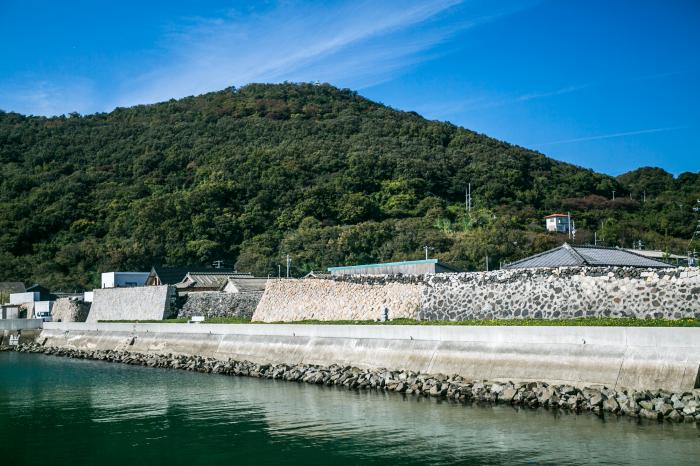 After a short 20-minute ride, the ferry landed at Megi Port. I had to disembark quickly because the boat pulls out almost immediately, heading for the neighboring island of Ogijima. The first thing I noticed as I walked off were unusually high stone walls, some as high as 4 meters. Made of black stone or white, they resemble the walls of a Japanese castle, surrounding and completely concealing the houses within. This creates a landscape not found on any other island in this region. 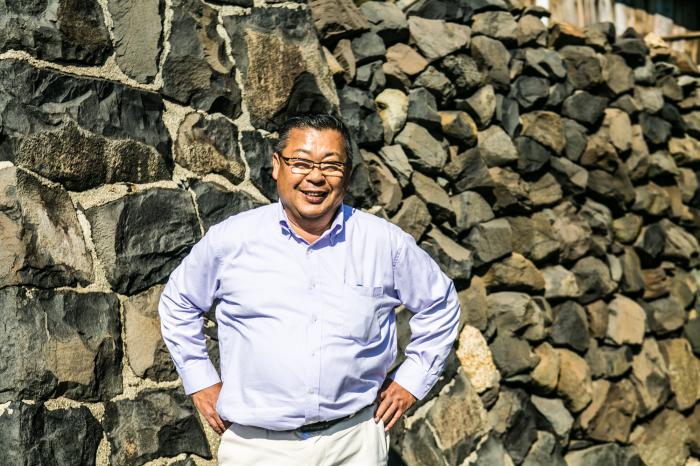 I stopped to talk with Shigeru Ikeda, a Megijima native who left the island to find a job, but returned after he retired and now works as the director of the island’s community center.

“These walls are called Ohte,” he told me. “They protect the houses from fierce winter winds and tides. Gusts can reach up to 30 meters per second—gale-force winds so strong, you can’t even walk.”

“They’re caused by the island’s topography,” he explained. Starting around December, a strong seasonal wind blows from the northwest. When it hits the high mountain ridge running north-south through the island, it changes direction and comes charging down the slope. When it hits the sea, it whips up the water and sprays it over the houses like rain.

“The islanders call it Otoshi,” Shigeru told me with a laugh. “The curtain of spray is so thick, we can’t even see Takamatsu, which is just across the channel. Although the Triennale doesn’t take place in winter, it would be worth visiting at least once during that season just to see it.” 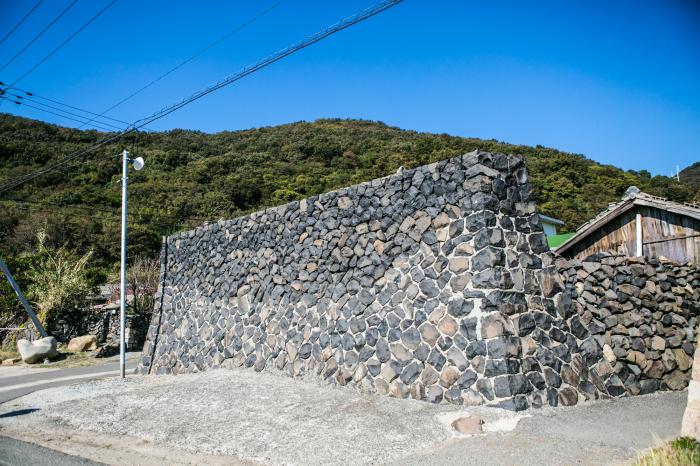 The largest village on Megijima is Higashiura. Located right by Megi Port, it has about 150 houses but, due to depopulation, only 90 or so are occupied. The high walls called Ohte are concentrated on the southern edge of the village facing the sea. They’re highest near the mountain and decrease in height after that. On the west side of the island, there are almost no Ohte. 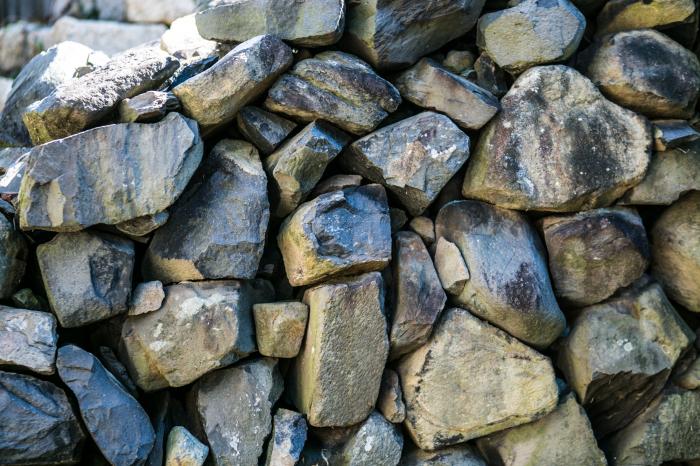 The house nearest the mountain, which has a very high Ohte, belongs to Shigeru’s wife’s family, and I was given special permission to see inside the walls. Made of jet black basalt, the wall along the sea is huge, almost 4 meters tall and 1 meter thick.

“I’ve never really looked this closely at the Ohte before,” Shigeru confessed, “but now I see that smaller stones have been inserted in the gaps on the back side of the wall. That must be for reinforcing.”

The face of the wall is stacked in the tawarazumi style in which large stones are laid at a 45-degree angle. According to Shigeru, these walls have stood like this since he was a child, without even once collapsing. 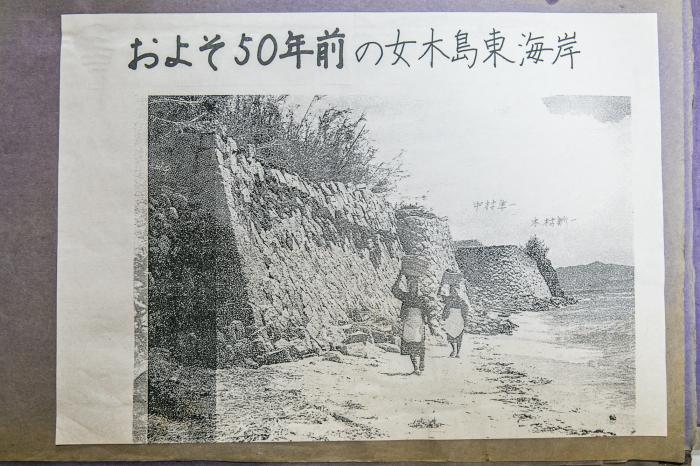 The bottom of the Ohte was buried in concrete when the shore along the port was reinforced to protect it from erosion. In the photo Shigeru showed me above, you can see what it used to look like. The narrow beach lined with stone walls makes it clear how close the village was to the sea, while the people carrying baskets on their heads make it look like a scene from another country.

Recalling those days, Shigeru told me, “The space at the foot of the Ohte was barely wide enough for a single cart to pass. We often stuck a pole out from between the walls to catch fish.”

Listening to his tales made me want to slip back in time and walk the shore of Megijima in those days. Seen from the sea, the village surrounded by its high stone walls would certainly have appeared a suitable place for an ogres’ den. 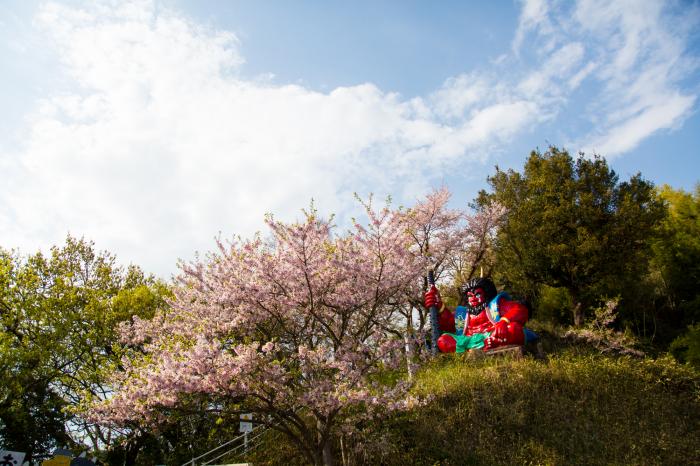 Yellow gazanias were blooming in profusion around the stone walls. The island is also famous for its cherry blossoms. Both the flowers and the trees were planted by the islanders.

“When I was a boy, there were already 700 cherry trees. Now there’re 3,000, with 100 more planted each year. Be sure to come again in spring. The blossoms are quite spectacular.”

At the end of our visit, I asked Shigeru to tell me what he loves most about Megijima. “I traveled all over Japan for my work, but I have to say that this island is the most beautiful place in the whole country. Come and stay the night, and you’ll see what I mean. At dawn, you can watch the sun rise over the little island of Oshima, in the evening you can see it set between the two cone-shaped islands known as Ozuchi and Kozuchi, and at night, you can see the lights of Takamatsu reflected in the sea.”

The beach on Megijima has been designated by the Ministry of the Environment as one of the top 100 beaches in Japan, and it’s certainly a popular place in summer. Located just a short 20-minute ferry ride from Takamatsu, this little paradise has some wonderful sights to see. 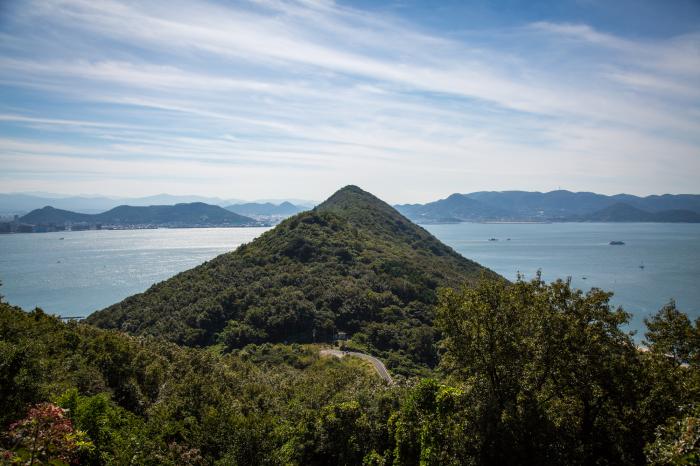 On my way back, I climbed to the top of Washigamine, which Shigeru recommended highly. The stunning panorama that lay before me included many of the islands participating in the Setouchi Triennale. Of course, the numerous works of art on the island are special gems, but Megijima’s greatest treasure might just be this fantastic view.