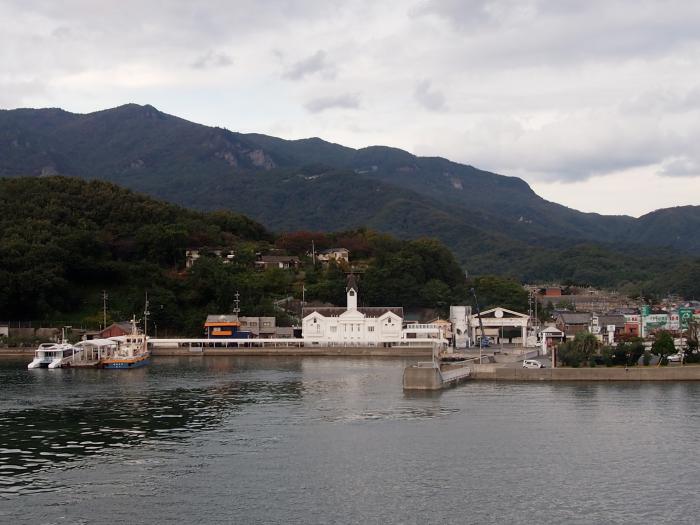 Wanting to explore more of Shodoshima, I disembarked at Kusakabe Port and visited three local restaurants to get a taste of island cuisine. 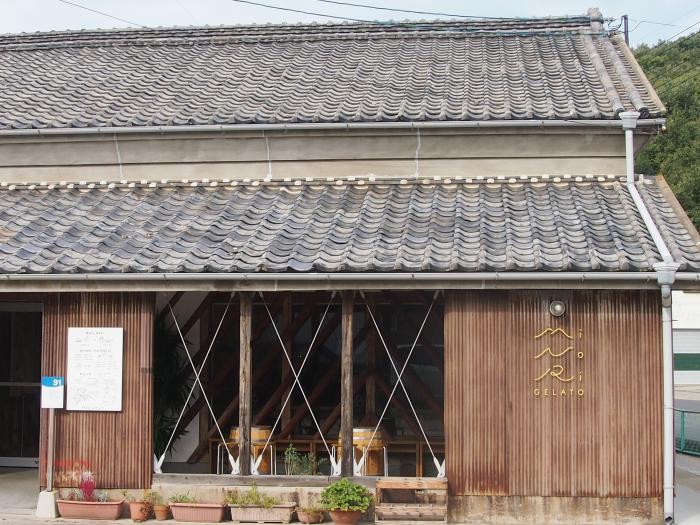 Just a short walk from the port, my eyes were drawn to this building, a gelato shop that opened as one of the artworks for the Setouchi Triennale in 2016. In fact, the 2016 Triennale was the impetus for establishing all three of the restaurants I visited on this trip.
Walking through the entrance, I was greeted by a gorgeous palette of gelato that looked like an artwork itself. Some of the flavors were a surprise, such as fig, squash, roasted eggplant, and sake lees. 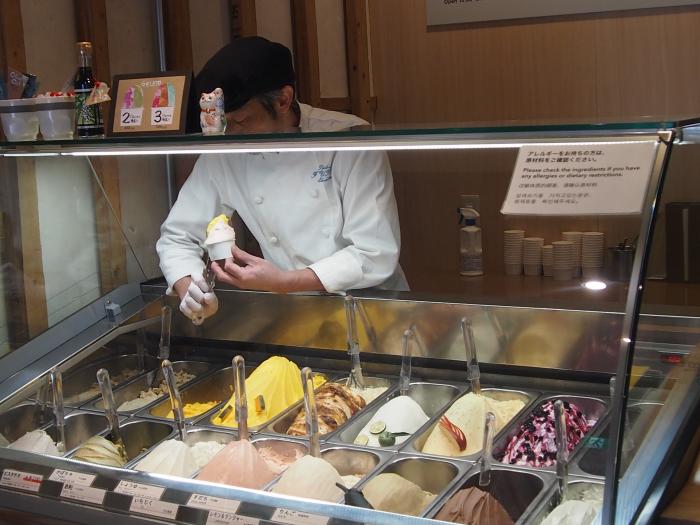 As he scooped some into a cup for me, the owner, Nobuto Shibuya, told me that most of the ingredients were grown on the island. “Our menu includes flavors that everyone associates with Shodoshima,” he said, “such as olives and soy sauce. In winter, our range of citrus flavors as well as the strawberry gelato are really popular.”
Nobuto is also the owner and chef of a nearby Italian restaurant. I asked him why he decided to open a gelato shop in addition to that one. “I was already making gelato as a dessert at my restaurant,” he explained. “But it’s small and by reservation only, so I couldn’t make a lot. There are so many fantastic ingredients produced on Shodoshima, and I wanted to make it possible for lots of people to try them. Gelato seemed like the perfect way to do that because it can be made with all kinds of things and everyone, regardless of their age, can enjoy it.” 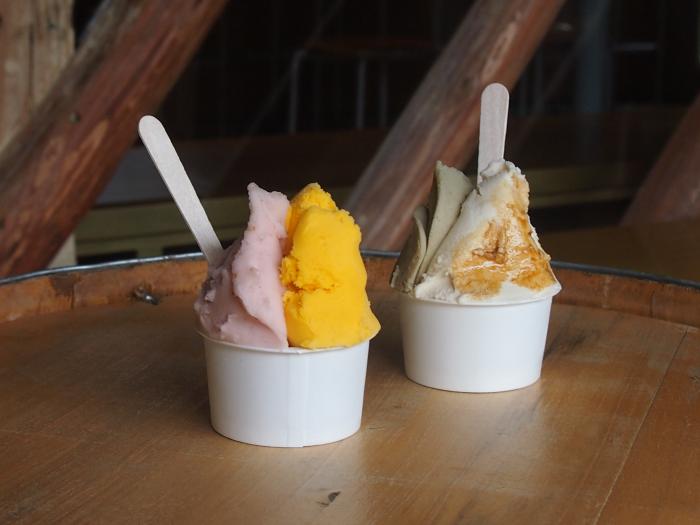 Intrigued, I tried several kinds. Each one brought out the distinctive flavor of the ingredients without being too sweet. They were so delicious, I could have gone on eating them all day.

“Another reason I started the gelato shop,” Nobuto continued, “was because I saw how the Triennale was revitalizing the island. I wanted to participate in some way, so I proposed the idea of starting a gelato shop as an art site. During the 2013 Triennale, I had gotten to know the creative unit graf from Osaka. We worked together to come up with a concept for the shop and discussed how to make food part of the design. I had had my eye on this building for quite a while because it was in a perfect location. There’s a bus stop right in front, and it’s right by the port as well.”

The port serves as a gateway to the island. While people wait for their ferry, they can stop in at the gelato shop for a cup of coffee and a light meal, too.
“Before this, there was no place near the port for visitors to take a break or get information about the island,” Nobuto told me. “When I moved here from Nishinomiya in Hyogo prefecture in 2011, there were so few restaurants that tourists would go to the convenience store for lunch. That seemed such a waste I just had to do something. This gelato shop was made possible by other people who felt the same way and pitched in to help. I want to help stimulate circulation of the local island economy and also bring in income from outside.”

My next stop was Koyomi, a restaurant also located near Kusakabe Port and specializing in creative local cuisine. The owners renovated an old house with a lovely view of the sea and gave it a modern touch. 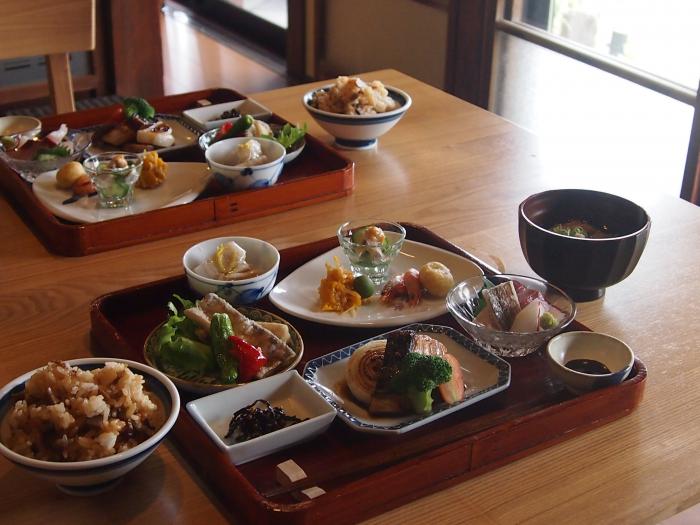 As I said, it serves local cuisine with a twist. Here you can taste dishes that recreate food from works written by author Sakae Tsuboi, a Shodoshima native most famous for the novel Twenty-four Eyes. I had the set lunch and was impressed by both the number of dishes and the beautiful presentation. The starters were cutlass fish, fried squash mixed with vermicelli-like “somen” noodles, and small patties of sticky rice with sweet potato known as “imo-neri.” The latter appears in Tsuboi’s novel Koyomi where it was served for supper to some workers. 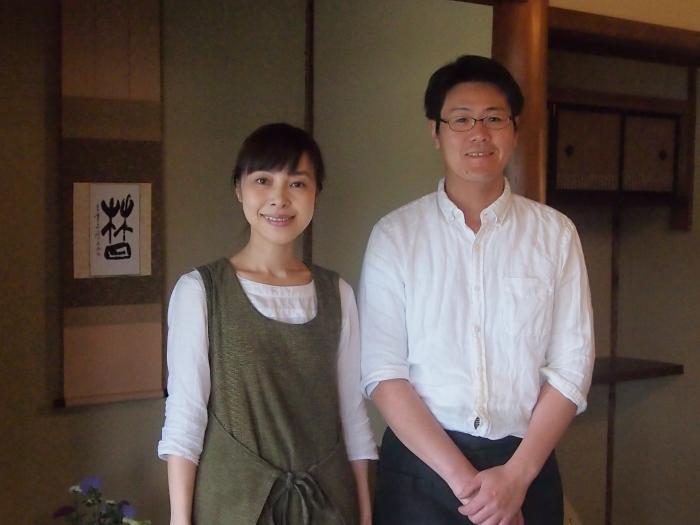 The owner, Hitoshi Kishimoto, was born on Shodoshima. He returned to the island in 2010 and worked for a local company that made condiments from seaweed and other foods simmered in soy sauce. The idea for the restaurant began when his wife found an ad for Fram’s Setouchi Food School, for which Hitoshi signed up. Designed to develop human resources and food projects for the 2016 Triennale, the course was directed by the Triennale’s general director, Fram Kitagawa.

“We not only listened to lectures, but also got to cook and travel to see what was being done elsewhere. One thing that really stayed with me was the word “shokenshi” which Fram used in one of his articles. Shokenshi literally means “world master,” and it was used for people who traveled to other places and brought home and shared what they had learned. The things we associate with Shodoshima and its history, such as performing arts and cultural customs, soy sauce, sesame oil and olives, were all brought here by shokenshi and then developed further. Inspired by this, I began thinking about how to make a project that incorporated the island’s history.”
Hitoshi’s proposal, “One Plate Meal from a Book,” was selected for the 2016 Triennale. 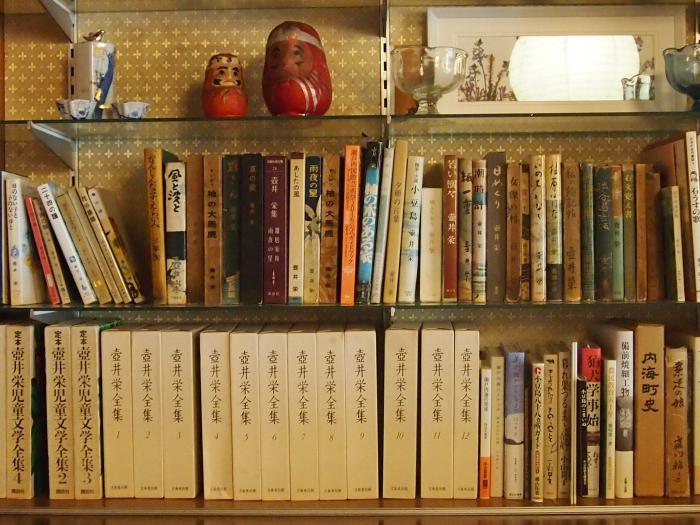 “The concept was to recreate dishes from Sakae Tsuboi’s novels and serve them to guests,” Hitoshi explained. “I needed people with many skills to gather information and to document and film the project. I not only had help from many islanders, but also from other participants in Fram’s Setouchi Food School. When I first applied, I wasn’t thinking of starting my own restaurant. But with each event, the menu expanded, and it seemed a shame not to have a place where more people could come and taste this food. I didn’t want to lose all the recipes that we had reproduced either, so I opened a restaurant.”
For their location, the Kishimotos chose the spot where the boat rows away in the last scene in the novel Twenty-Four Eyes. They found an old house, renovated it and opened in July 2017.

“We hope that our restaurant will let guests experience many aspects of Shodoshima,” Hitoshi said, “including island culture, historical food manufacturing industries, and fresh seasonal ingredients. We’re so glad that we can use what we developed for the Triennale project and through that to promote some of the great things about this island.”

The last place I visited was a restaurant in Tonosho Town, which was also established by a graduate of Fram’s School. The shop’s main attraction is freshly squeezed juice. The menu that day featured hog fennel and green grape juice and persimmon and red grape juice. They were refreshing and very nutritious. 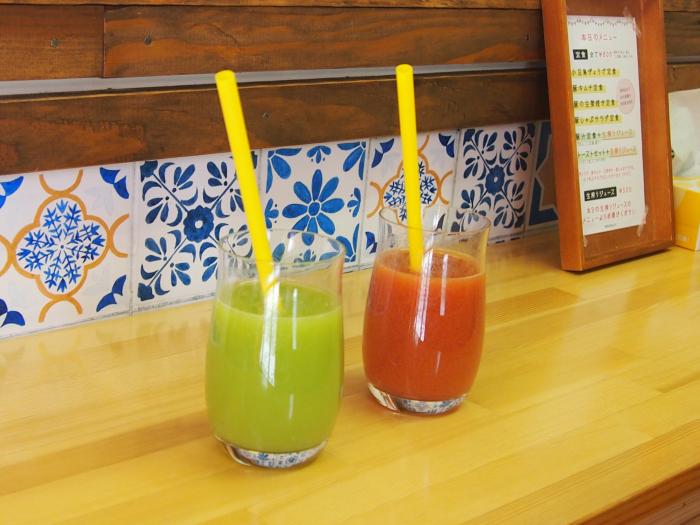 “We use five or six seasonal ingredients from Shodoshima in each glass of juice,” the owner Naoyuki Kawabata told me. “Each juice is packed full of interesting information. If someone asks me, ‘What’s hog fennel?’ or ‘Do you grow grapes on this island?’ it’s the start of a great conversation.”

Naoyuki originally visited Shodoshima to learn about olives. He made friends with local farmers and learned that there are few places on the island where visitors can enjoy the great variety of produce grown here. He also learned that many fruits and vegetables that aren’t the standard size or shape are simply discarded. He began looking for ways to make good use of this waste.

“I stumbled on an ad for Fram’s School by accident,” he said, “and thought that maybe it would give me an idea of how I could do something on Shodoshima. The theme of the school was how to rescue ‘food refugees.’ The definition of food refugee probably differs from one island to another. On Shodoshima, many tourists cycle around the island but there are few places where they can sit and enjoy the island’s cuisine at their leisure. There’s also very little information available about places to eat. When I heard that, I realized that local foods weren’t being adequately promoted. Though I’m from Osaka and not a food professional, I consulted with the island farmers, and when I submitted a proposal to the Triennale, it was accepted.” 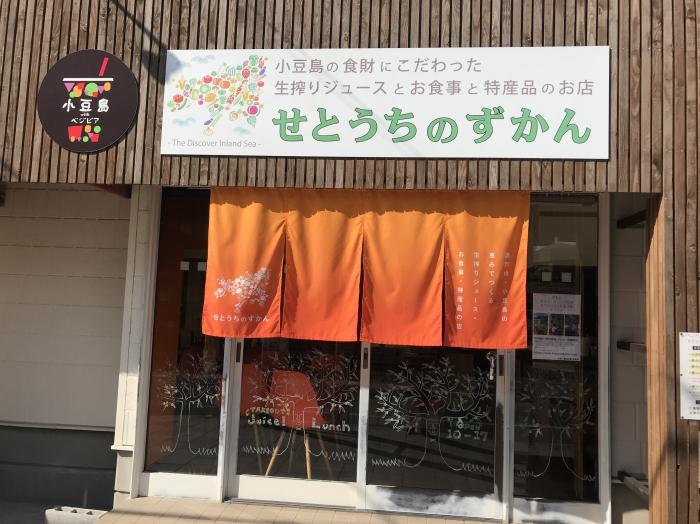 Naoyuki opened his restaurant during the 2016 Triennale. He continues his work as a graphic designer in Osaka while traveling back and forth to the island. Of course, he designed his own shop, and he also gets requests from local farmers to design their websites or logos.

“I made a conscious decision not to move here because I want to promote Shodoshima foods from an outsiders’ perspective,” he told me. “I also want to turn wasted produce into money, so I’ve been shipping a lot of the ingredients to juice bars in Tokyo. When I’m in the shop, I want to serve as a point of connection between tourists and local farmers. If I tell them more about the farmers I know, they’ll get interested and want to eat the food they grow. When people come for the Triennale, they often don’t have time to sit for long. Juice can be served quickly, and still lets them taste and experience Shodoshima’s great seasonal produce.” 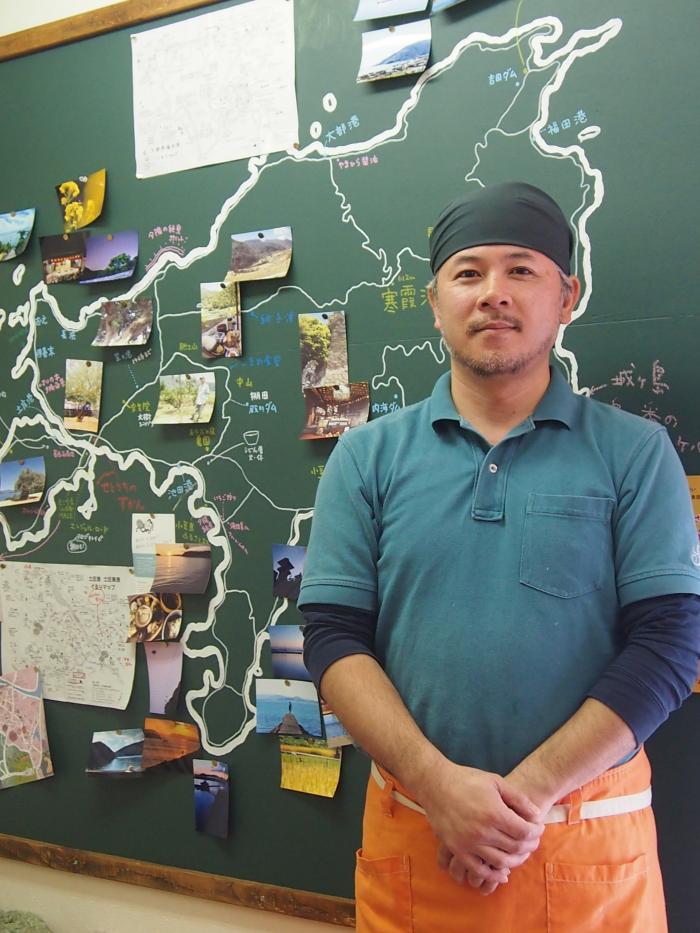 These three restaurants, which originally opened for the Triennale, have become firmly rooted in the local community and continue to generate new stories.

Fram’s School has already started preparations for Setouchi Triennale 2019. The theme for this year is the creation of a community-based art festival. Participants will receive in-depth instruction on how to create an art festival. The aim is to develop professionals capable of building local communities and managing events. The Triennale will also promote collaborations among the islands to increase networking, as well as among schools to encourage children to think about the revitalization of their localities. By joining hands with many different people to make the Triennale a success, this initiative will raise up new human resources capable of supporting art festivals and revitalization, leading to new developments.
When you visit the islands of the Seto Inland Sea during the 2019 Triennale, look for those threads that have been carried over from 2016 to weave new stories for the future.