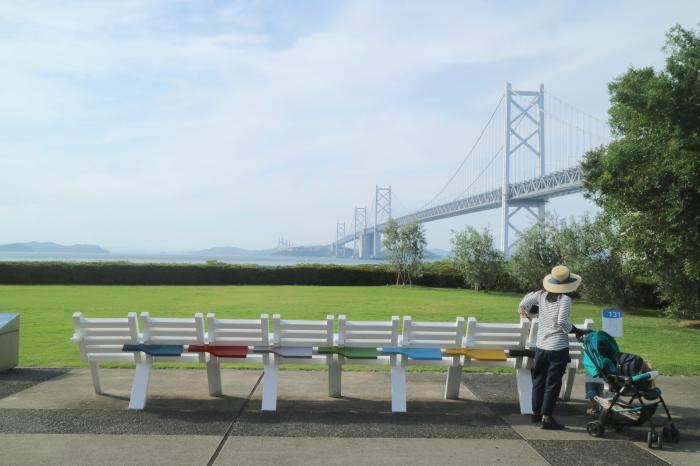 Shamijima is one of the 12 island venues of Setouchi Triennale 2019, but you don’t need a boat to get there. The small channel separating it from Shikoku was filled in 50 years ago during a major land reclamation project. The Seto Ohashi Bridge, which connects Shikoku to Honshu by road and rail, opened in 1988, and the area at its foot near Shamijima is now Seto Ohashi Memorial Park.

Near the water at the edge of this park is Nine Legs of Eight People, a colorful bench created by artist Syuzo Fujimoto. Be sure to stop and take a seat. You’ll be rewarded with a spectacular view of the bridge spanning the Seto Inland Sea. 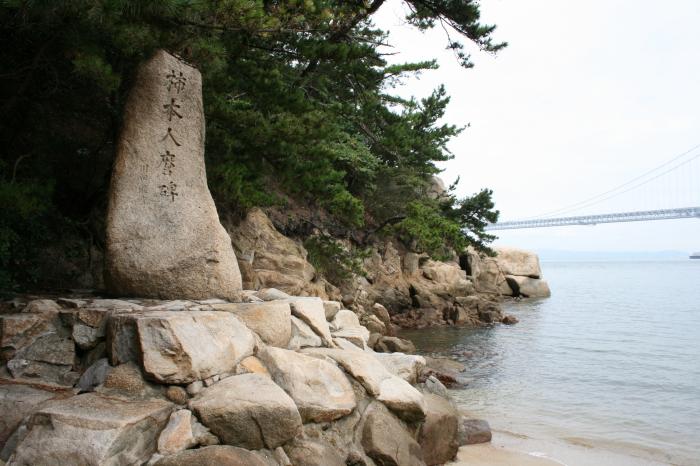 Photo: Monument to Kakinomoto no Hitomaro with Seto Ohashi Bridge behind

Considering that it was once a remote and tiny island, Shamijima’s connection to arts and culture is surprisingly long. In the 7th century, the renowned court poet Kakinomoto no Hitomaro stopped on Shamijima during his travels and composed a poem praising the beauty of this area. A monument to the poet can be found on Osogoehama, a little beach on the former island’s north side. 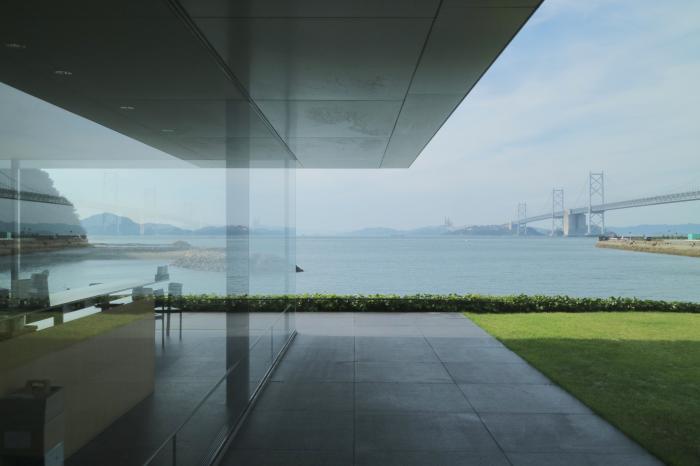 Situated along the path leading to Shamijima from Seto Ohashi Memorial Park is an elegant structure clad in gray-green slate. This is the Higashiyama Kaii Setouchi Art Museum designed by Yoshio Taniguchi, and it showcases a collection of works by Nihonga painter Higashiyama Kaii (1908-1999). The superb view from the museum café is the perfect complement to the exquisite works of this master painter.

Until sixty years ago, the site on which the art museum now stands was covered in salt ponds that were first built here in the mid-19th century. In a method known as irihama-style salt production, dikes were constructed on the shallow tidal flats, and seawater was channeled into these ponds at high tide. Sun and wind evaporated the water, and the salt-encrusted sand was then boiled in a tank with seawater to make salt concentrate. The dike that runs along the water in front of the museum is a remnant of this era. 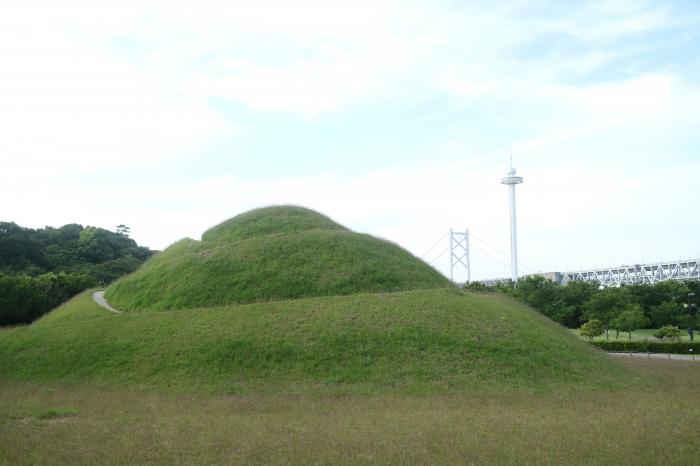 On the way from the museum to the village of Shami is another Triennale work: Stratums by Tanya Preminger. Originally constructed of brown earth, grass has covered the piece since it was unveiled in the spring of 2013, transforming it into a green hillock in a field of grass. It’s now a familiar and much-loved landmark. During Setouchi Triennale 2016, many visitors trotted up and down its spiral paths, pausing at the top to enjoy the view and take photos. 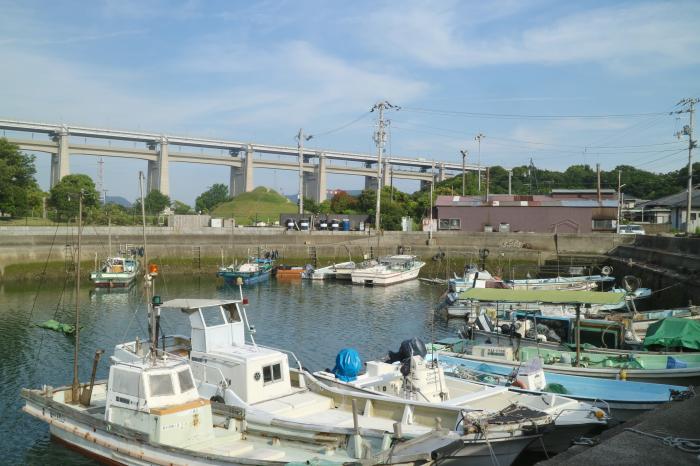 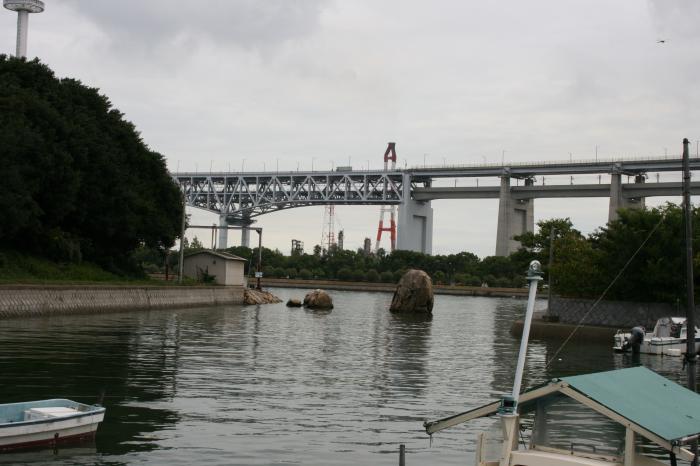 At the entrance to the village is a little fishing port. Several large rocks rear up from the water at the mouth of the harbor, right in the way of boats passing in and out of the channel. The largest is Enaga-ishi, and it’s said that the umbilical cord of Rigen Daishi, one of the five great saints of the Sanuki region, is buried beneath it. People believed that touching this stone caused stomachaches, which may explain why it has never been removed. 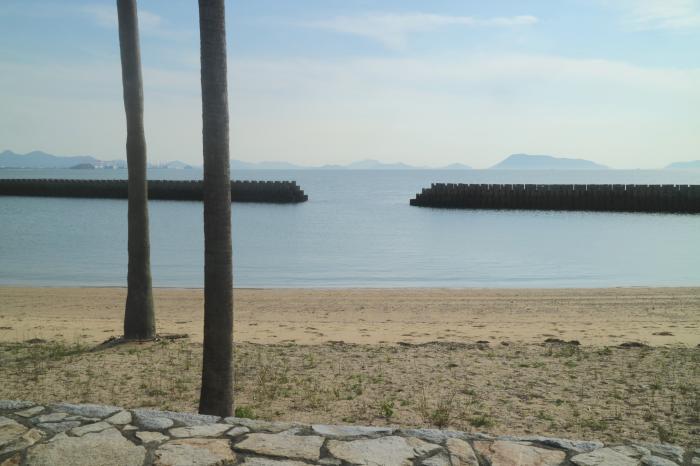 If you follow the paved road past the port and veer left, you’ll come to a beach. Chosen by the Ministry of the Environment as one of Japan’s hundred scenic beaches, it’s popular with swimmers and sunbathers in summer. Nearby is Shamijima Nishonohama Beach House designed by Tetsuro Fujiyama + Tomii Architect & Associates. It makes a nice rest-stop for beach goers. Yasuaki Igarashi’s Sora-Ami: Knitting the Sky fluttered along this beach during the last Triennale. Check out the link below to learn how this collaborative work was created.
https://setouchi-artfest.jp/en/blog/detail132.html 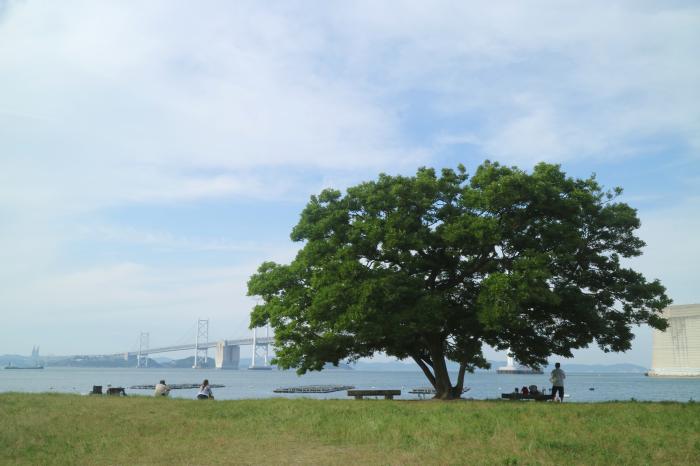 Walking back from the beach, try taking the other road that leads up a hill. This will take you to Nakanda Beach. A single Japanese hackberry tree stands tall and lush in the center. Its broad branches provide welcome shade. Beyond, children often play tag and run through the sand along the shore.

Nakanda Beach is considered an important archeological site with signs of habitation dating back to the Palaeolithic period. Archeological finds indicate that from the Yayoi period (300 BCE – 250 CE) to the Kofun period (about 300 CE – 538 CE), salt was produced on Shamijima using special pottery vessels resembling thin cups. Concentrated seawater was poured into the vessels, which were placed in a row. A fire was lit beneath them to evaporate the water, leaving salt in the bottom of each cup. The island’s easy access to saltwater appears to have encouraged salt production in both the distant and recent past.

Shamijima is an interesting mix of ancient and modern. From its shores, we can see the Seto Ohashi Bridge, a marvel of modern technology, while its trails and beaches remind us of the lives of people long ago. Let yourself feel the flow of history as you stroll around this former island.