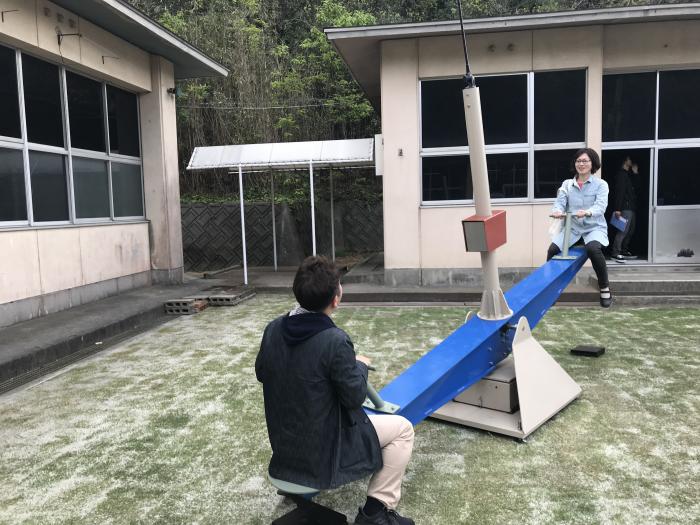 I’m on a quick pre-Triennale tour of the artworks, and the works in the old school on Shamijima are quite intriguing.

Those by Russian artist Leonid Tishkov take up three rooms. For each, he has used a different approach to pursue the common themes of the moon and salt. In a scene from Tishkov’s childhood, a snowy northern plain seems to spread across a board covered in water, while in the background, aurora-like images move gracefully on a screen. The landscape is imbued with a silence and solitude reminiscent of the earth or the cosmos. It captures the silver sea, gleaming like a cold steel plate, from a poem by the 7th-century Japanese poet, Kakinomoto no Hitomaro: “On the sea of heaven, clouds rise like waves, and the boat of the crescent moon sails into a forest of stars.”

Yoshitaka Nanjo’s work is set up so that we catch glimpses of it as we walk along the corridor. His approach, which allows the visitor to experience time through the salt of Nanjo’s native Sakaide and through those who came before him, could only have been achieved by someone deeply engaged with this location. As always, his use of light and sound is lyrical. The last of Nanjo’s works is a little surprise, a beautiful affinity of salt and water.

Anahita Razmi is an Iranian artist who lives in Germany. Thirty years ago, many Iranians lived and worked in Japan, but when the government applied stricter regulations, most of them left. Imagining that those who remained must have developed many culinary fusions of Iranian and Japanese cuisine, Razmi turned the school’s old science room into a food laboratory. I’m looking forward to seeing how it evolves.

In the school yard, an Australian unit has installed multilingual seesaws with which we can enjoy odd and interesting interactions. Another duo, Yotta, has launched the Ebune Project, reminding us that in the past, seafaring people lived on their boats and that their carpentry skills were eventually used to make houses on land.

Even a short trip like this was fun. Clearly, it’s going to be another great Triennale.