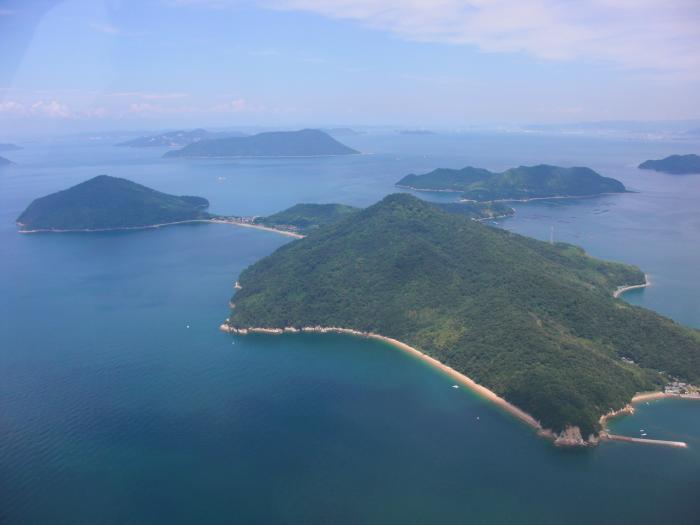 From above, it looks just like a boat propeller. Originally three different islands, they were connected by the shifting of the tides, creating Awashima Island as we know it today.
With a circumference of 16 km, it is home to five communities, each with its own charms and things to see and do.
Accessible by boat, you can easily fill an entire day leisurely exploring the areas around the island’s two ports.

First, I take a ferry from Suda Port in Takuma, Mitoyo City, to Awashima Port, then from there I switch boats and continue to Kamishinden Port. Today’s journey begins with the traditional food of Awashima, chagayu. When I arrive, I am greeted by Yumiko Miyazaki (pictured left), who serves chagayu at her guesthouse, and Etsuko Matsuda (pictured right), who assists her. 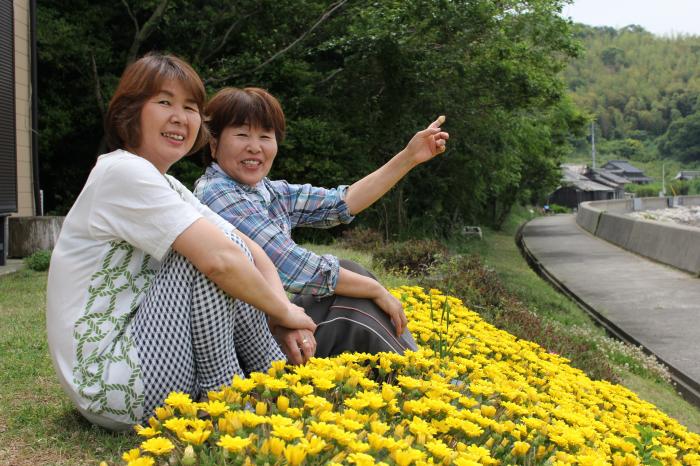 Chagayu is a kind of gruel made with rice cooked in tea. It is said that long ago rice was hard to come by on Awashima and the surrounding islands, so the people living there would soak it in tea to make it more filling.

“We ate it when we were children,” says Yumiko. According to her, back then they used to make it with Goishi-cha fermented tea, which comes from the mountainous region of Kochi Prefecture. 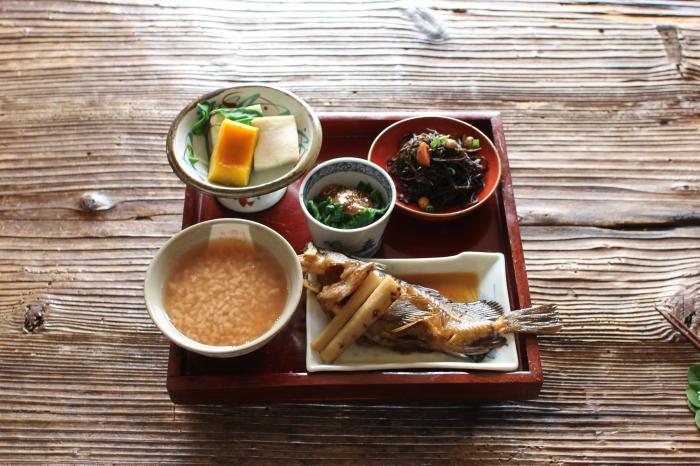 Before long, though, people’s lifestyles changed, and at some point they stopped eating chagayu.
Its revival came thanks to an off-the-cuff remark by Etsuko. When visitors to the islands of the Seto Inland Sea began to increase thanks to the Setouchi Triennale, Yumiko wanted to start serving something to represent the Awashima Island. It was then that Etsuko said, “If you want to show off the flavors of Awashima, why not use chagayu?”

Since Goishi-cha is becoming quite rare now, they decided to use herbal tea they grew themselves instead. “Chagayu is a staple food of the island, so we make it with ingredients grown right here in our own neighborhood,” says Etsuko.

The preparation of chagayu couldn’t be easier. Simply bring herbal tea to a boil, add the uncooked rice, and let it simmer for 20 minutes.

According to Etsuko, leaving the rice just a little undercooked is best. When I finally get a chance to try it, I find that the aromatic bittersweet herbal tea perfectly accentuates the sweetness of the rice. 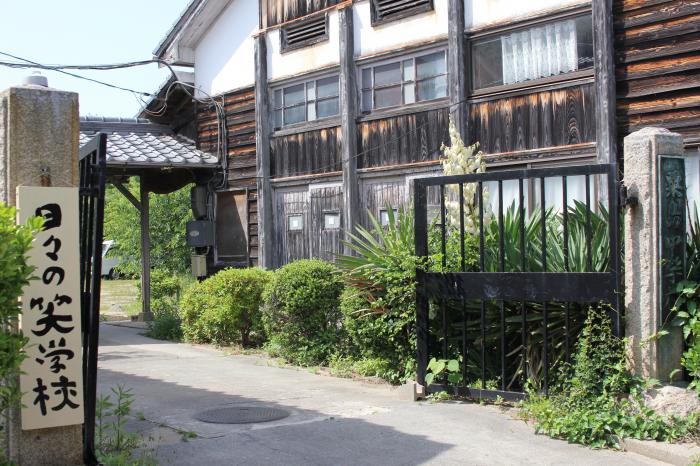 With a full stomach, I return to Kamishinden Port and take a 10 minute boat ride back to Awashima Port. From there, it’s just a short, 5 minute walk to the Awashima Artist’s Village.

Mitoyo City runs a program called “Awashima Artist-in-Residence (AIR)” which invites young artists to live on the island in exchange for supporting their work.

Their studio is the former Awashima Junior High School’s wooden school building. In the summer, it also becomes a place where the residents of the island can come to see the finished works.

The sign on the gate reads “Everyday Smile School,” which was made by the director of AIR, the artist Katsuhiko Hibino, when he did an art project here. 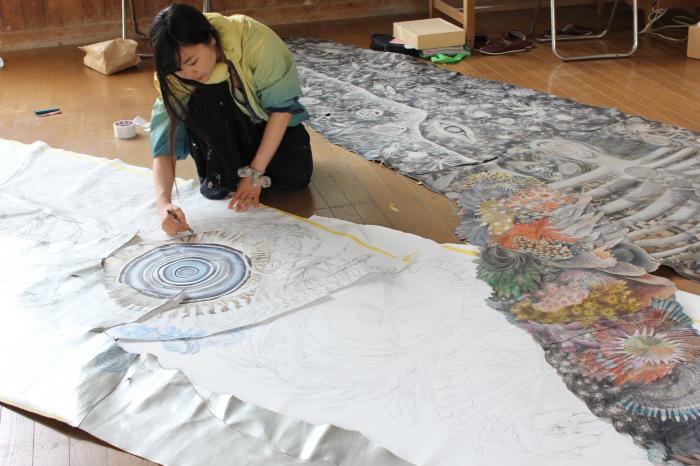 This year’s artists-in-residence are Maki Ohkojima, from Tokyo, and Mayur Vayeda, from India. They are both creating art while living on Awashima.

“I’m taking leather from various animals such as pigs and stitching them together to make the shape of a whale, upon which I draw various living things. On Awashima, the connection between people and the sea is very prominent, so I want to create a work that shows how we are all tied to the nature and animals of the sea, mountains, and forests,” says Ohkojima as she draws on the animal leather spread out on the floor in front of her. 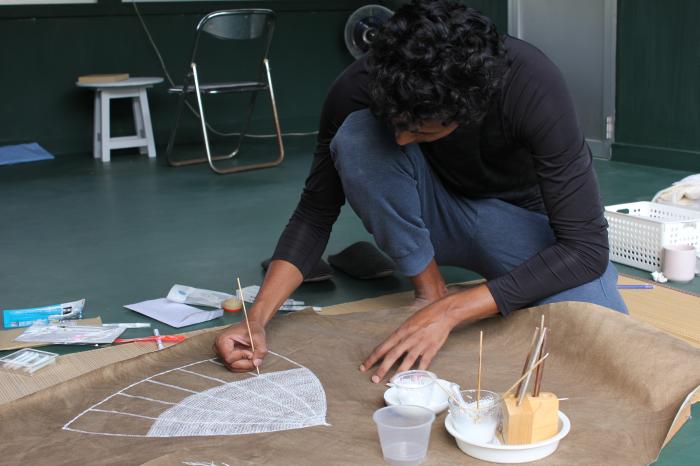 Mayur Vayeda is working on a Warli painting, which is a form of art that has been practiced by the Warli tribe of India since 3300 BCE.
“Awashima used to be home to many seafarers, and developed a unique culture. I want to create a work that tells a story about that history and culture,” he says.

It seems that people from around the island visit almost every day just to say hello or help out with their work. Sometimes, Mayur serves them Indian chai. 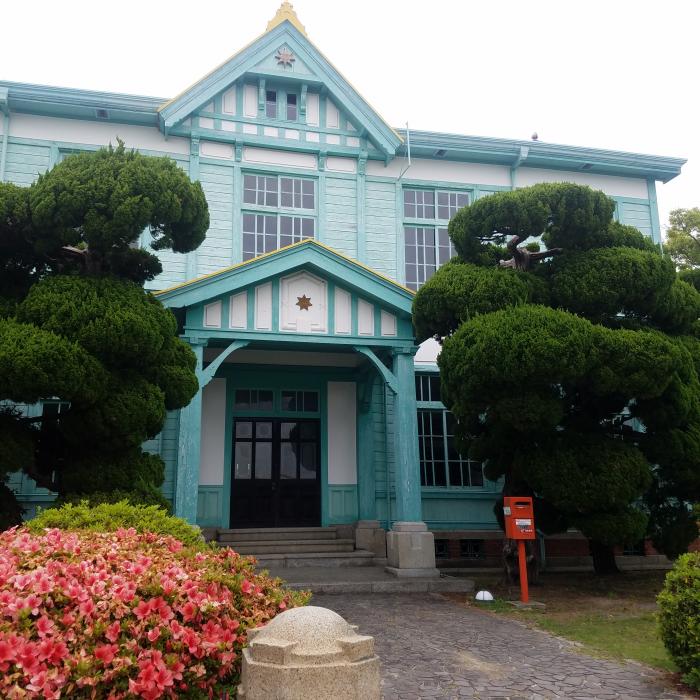 Leaving the Awashima Artist Village, the road opens up a bit, and a retro building with light blue walls comes into view. I’ve arrived at the Awashima Marine Museum.

Japan’s first sailing school was established here in 1897, and over the years it produced many fine seamen.
The wooden school building, built in 1920, is still used as a memorial hall even now, with displays depicting the state of foreign countries that Awashima sailors went to port at, and scenes of life on the boats.

It is also home to the Setouchi Triennale artwork “SOKO SOKO SOZOSHO” (Project for the Museum of Seabed Inquiry Ship in Setouchi). 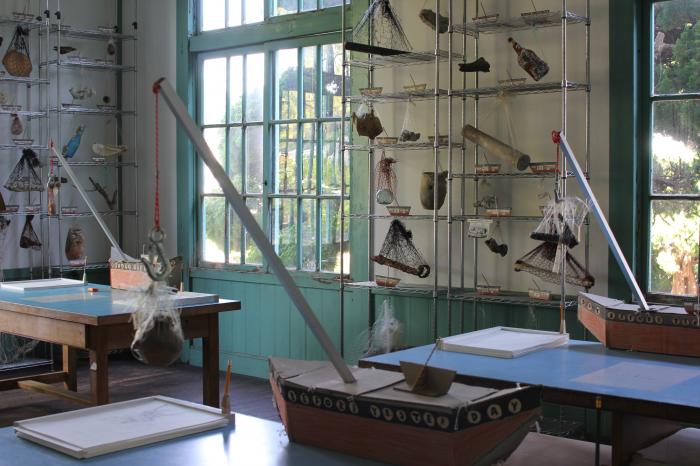 The museum displays objects that the artist Katsuhiko Hibino recovered from the seafloor while diving off the coast of Awashima.

Visitors can go around the room, looking at the objects one by one, and imagine the vast world at the bottom of the sea.

Before I realized it, it was getting dark. On Awashima, there’s a special event that can only be enjoyed at night during certain parts of the year. That is, the sea firefly light show. 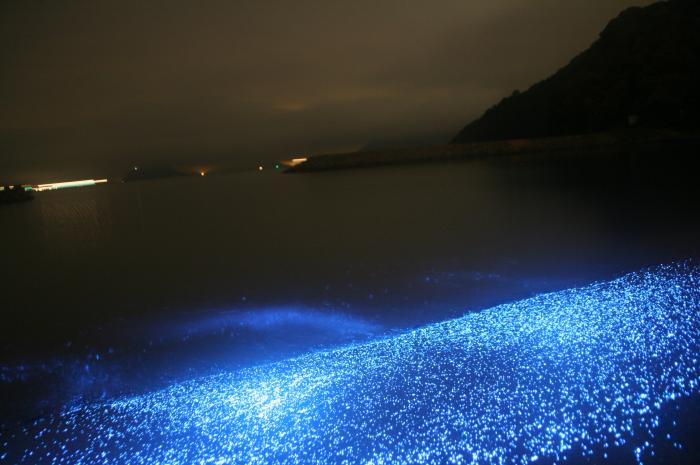 Visitors who stay overnight at the Le-Port Awashima hotel can participate in a special tour to see the mesmerizing sight of countless sea fireflies lighting up the ocean.
The tour is only available between June and September, and is sure to become an unforgettable summer memory.

Whether you stay till evening or spend the night, Awashima Island is the perfect way to spend a relaxing day.