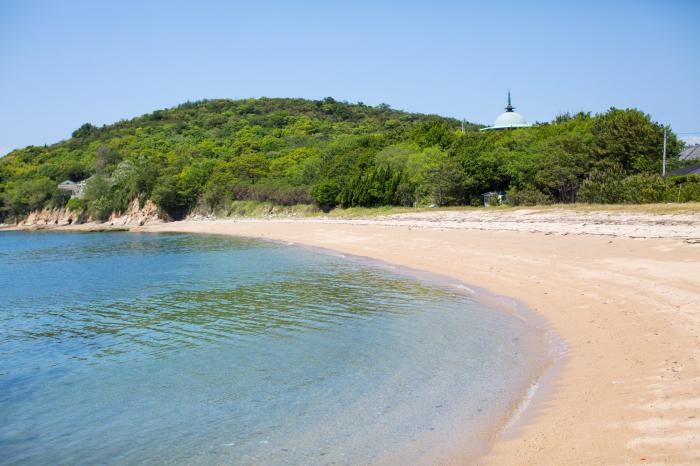 The coast of Oshima Island is located about 8 kilometers from Takamatsu City in Kagawa Prefecture.
On Oshima is the Oshima Seishoen National Sanatorium, which was established in 1909 as a facility for patients with leprosy (also known as Hansen’s disease). Overcoming the forced quarantine of the past, Oshima became one of the islands staging the Setouchi Triennale International Art Festival in 2010, bringing in many visitors. However, due to the aging population of the residents of the sanatorium, the memories of the island’s history are dwindling away.

The local council expressed their desire to preserve and pass on the memories and records of Oshima to the next generations. In response, the Setouchi Koebi-tai Network, the NPO organizing the “Koebi-tai,” the volunteer supporter group of the Setouchi Triennale, began to make a 1:150 scale-model diorama of the island, based off of the island in the 1950s, when there were some 700 residents in the sanatorium.
I visited Oshima to see the work in progress.

The workshop space is located in the Oshima Memorial Center (tentative name), which acts as Oshima’s community gathering space.

The Koebi-tai runs the Café Shiyoru inside the Center, and there are overnight rooms for visiting family members of the residents. My first impression was pure surprise at how gigantic the workshop room is!

The diorama is spread throughout the huge room, built to the same ratio as N scale model trains. In order to replicate the entire facility area, the diorama extends over 6 meters wide. The director, Kenjiro Kaneshiro, is the one giving directions to the Koebi-tai members. He usually acts as the Chief Executive Officer of the Fukutake Foundation, but as a longtime model train hobbyist, he was singled out for this job.

“Unlike model railways, this diorama requires precise accuracy, which is challenging. But I feel a sense of purpose with this project. It would have been easy to simply commission professionals, but we wanted to make it ourselves by hand, involving students and many other volunteers. Through the process of making the diorama, we can learn about the history of Oshima.” 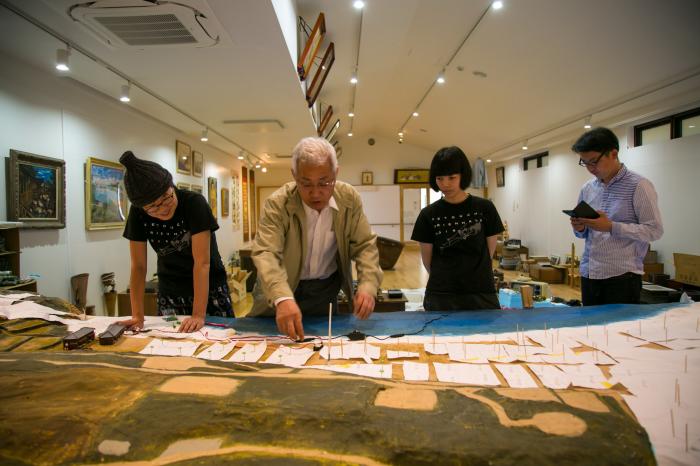 The process of creating the diorama began with gathering data, including archival materials such as old photographs and blueprints, as well as interviewing the residents.

“We researched models of nearby facilities, such as the Nagashima-Aiseien and Oku-Komyoen National Sanatoriums. Most of the other models are made at a 1:100 scale, with only buildings. We decided to make this diorama at a 1:150 scale because we wanted to include human figures, showing the way of life of the people living on the island at the time.”

After interviewing the residents, it was decided that the diorama would be set in the springtime.

“It appears that Oshima used to have more pine trees and less cherry blossom trees than now, but in the springtime many azaleas would bloom beautifully on the mountains. I wanted to recreate that.”

The scale size and season were easily decided, but finding blueprints proved to be extremely difficult.

“We were able to find blueprints for the most well-known and symbolic buildings such as the ossuary and the Oshima Hall, but blueprints for normal everyday buildings like the dormitories for singles and married couples are nowhere to be found. We don’t know how tall the buildings were, and the photographs are in black and white, so we don’t know what color they were.”

Architect Yukinori Hayashi was commissioned to create the blueprints, using aerial photographs and other materials to estimate the heights of each and every building, referencing door panels, windows, and other fittings. The colors of the buildings were chosen based on color photographs of other facilities of the same time period. 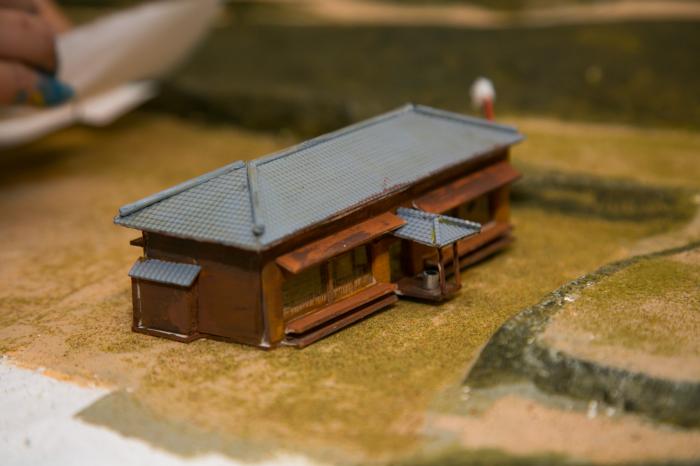 Mr. Kaneshiro showed me the scale models of the dormitories for singles and married couples that he made. The models were made using a laser cutter following the outline of the blueprints, and are carefully replicated down to the porch and well by the entrance.
“Twelve residents shared the same 40 square meter room. Personal space was very limited. As they are seen from a bird’s-eye view, scale models make that sort of information easy to understand, don’t you think?”

In order to make the diorama, Mr. Kaneshiro walked the length and breadth of the island, exploring the architectural remains and the places where buildings once were.
“It’s a completely different sensation to walk around the island with the intention of making a diorama. You become very aware of the terrain. On the mountaintop, there was a gazebo built from an Imperial grant. It had a view of faraway Takamatsu and Yashima Plateau, and people used to gather there to write haiku and waka poetry.”

There were many authors and artists among the residents, including poet Kazuko To and novelist Hiroshi Shima. The diorama replicates the island, showing a previously unknown side of their lives.

On top of being cruelly forced to enter the isolated facilities, patients were also put in charge of running the facilities entirely by themselves, in accordance with the Leprosy Prevention Law, which was established by the Japanese national government in 1953 and repealed in 1996. Even in such terrible and difficult times, the residents enjoyed pastimes such as farming, fishing, and baseball. They each had many memories to share. Shoko Sasakawa from the Koebi-tai, who conducted interviews with the residents, says,
“Everyone has such clear memories, even of long ago. I was really surprised at how precisely they could recall things like where the windows were. They seemed so happy when they described events like viewing the azaleas on the mountain in the springtime.”

The work on the diorama will continue with the help of volunteers, aiming for completion by March 2019.
“Every year, there is a summer camp on Oshima where children come to stay overnight on the island. We are planning to hold a workshop with them, making model pine trees for the diorama. The Setouchi Triennale will be held in 2019, and I hope it leads many people to visit Oshima and make it an island filled with smiling children.” 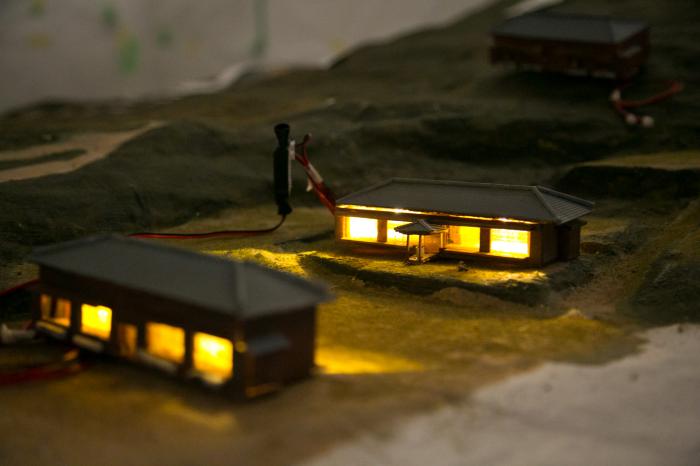 At the end of my visit, Mr. Kaneshiro turned out the lights in the room, and showed me the diorama lit up by LED lights installed inside of the model buildings. The shadows on the ground of the latticework painted onto the window, instantaneously transformed the diorama into a realistic scenery.

Ultimately, the diorama will include about one hundred buildings, and I can’t wait to see the finished work. For those who are interested, please check out the Koebi-tai workshop information.

The works on Oshima are open to public viewing on the second Saturday and Sunday of every month. If you plan to travel to Oshima on one of those days, please apply through the Koebi-tai Network in advance.
TEL：087-813-1741