The Setouchi Triennale is an art festival held on 12 islands and 2 ports in Kagawa and Okayama Prefectures. Uno Port in Okayama Prefecture is one of these venues and is located approximately a 5 minute walk from JR Uno Station. The port is also known as a departure and arrival point for the ferries which travel to Naoshima, Teshima, Shodojima, and the other islands where the art festival is held.

"A number of art festival works are located within walking distance of Uno Port and Uno Station. If you have anywhere from 30 minutes to an hour free, you can take a stroll and enjoy Uno's sights while looking for some of the artworks. So, why not use the time while waiting for a ferry to enjoy a walk in the areas around the port?" comments Mr. Kazunori Okura of the Tamano Tourism Volunteer Guide Tsutsuji no Kai (Azalea Society). 31 individuals serve as volunteer guides for the society, using expertise in history, art, and other fields to help them convey the appeal of the Uno area and Tamano City. Our walk through Uno with Mr. Okura began from JR Uno Station.

"When we leave the Uno Station station building, turn around and look back". Following Mr. Okura's instructions we turned and saw a station building decorated with black lines. "This is the JR Uno Minato Line Art Project. It's a work by the Italian artist Esther Stocker".

When he told us this, I remembered that we saw from the windows of the train that the platforms for 3 stations from Okayama Station to Uno Station (Tsuneyama Station, Hachihama Station, and Bizen-Tai Station) were all decorated with these same black and white patterns. We had actually begun our artistic journey even before we had boarded the ferry. All 4 of these stations are the works of Esther Stocker. The next work Mr. Okura introduced to us was the colorful "Beyond the last stop (Atsushi Ozawa)" located right next to Uno Station. Looking more closely, we saw that it was made of bicycles.

"This work was apparently made by recycling bicycles which were abandoned around Uno Port. The bicycles, which have become pieces of art, are each named, Sanuki Maru, Kojima Maru, Iyo Maru, etc., each taking the name of one of the former Uko Ferries, which linked Uno Station with Takamatsu Station in Shikoku. The colors of each bicycle are taken from the colors of their ferry namesakes."

The Uko Ferries served as a means of transportation for the daily lives of people in the area, and started operation in 1910. The ferries ceased operation in 1988 when the Seto Ohashi bridge was opened.

These artwork bicycles are also actually available for use as rental bicycles. Many tourists used the artistic bicycles to tour around Uno during the Setouchi Triennale 2016. "The Tsutsuji no Kai (Azalea Society) office is located on the 1st floor of the Uno Station front bicycle parking area. If the noren curtain is up, it means that there are members inside, so visitors can feel free to come and ask for guides or for other questions.", instructs Mr. Okura. Wait, what's that? Pictures of the sea, ships, and other photos are on display on the walls of the bicycle parking area. Actually, looking around, there are many photos of scenery including the sea and ships displayed on the walls of many of the buildings, including old photos depicting the Uko Ferries and scenes of the prosperity and bustling atmosphere of the time. "The photos displayed are the winning entries from the 'Tori Bune' photo contest which was held as part of the 'Renraku Bune no Machi (Ferry Town)' project. There are photos all over the place, so try and find them as you walk around". As we walked from the Station toward the port, the "Memory of Ship's Hull" (Atsushi Ozawa) artwork, which is made of iron, came into view among the greenery and trees. "This work uses a real anchor. It's another work by the same Atsushi Ozawa who also made the 'Beyond the last stop' artwork we saw earlier. Iron waste collected from city residents was heated, hammered, and hung on to an anchor from a battleship constructed in 1943. The iron waste is apparently supposed to represent seaweed and buildup encrusting items in the ocean. The artist has held workshops several times since the work was completed. Each time new iron waste is added, so you can also watch as the work slowly grows and develops". From this point you began to have a clear view of the sea and islands, as well as the ferries heading out to the islands.
It's honestly a little surprising to be able to see this kind of art, the sea, the islands, and all of this other scenery unique to Setouchi, only such a short walk from the train station. When I said this to Mr. Okura, he laughed and replied. "This is only the beginning". Another "Memory of Ship's Hull" work which uses the propeller from a Norwegian ship is located close to the Uno Cruise Port which is large passenger liner dedicated port where several ton class luxury liners dock. The next work we head for as we gazed at the ferry heading for Naoshima was Mr. Okura's "Most recommended" work. As we walked towards the large passenger liner dock, we found 2 colorful fish waiting for us. "The larger fish is 'Chinu - the Black Sea Bream of Uno' (Yodogawa-Technique), and the smaller is 'Uno Kochinu' (Yodogawa-Technique). The larger is a work from 2010, which was renovated in 2013 and 2016. It was made using empty cans, PET bottles, and other unwanted items from city residents, so you will sometimes hear people saying things like, 'Oh, this is the toy that I gave to the project' as they look at the work". The smaller work is from 2016. The inside of the fish is a slide, making it like a sort of secret fort, which is apparently very popular with children.
"While you walk around Uno Port and enjoying the art, you also get a sense of Uno's history. There is a bronze bust of Naosuke Higaki, the 8th governor of Okayama Prefecture, who worked so hard to build a port in Uno, and the remnants of the Uko Ferries, which are designated as a Heritage of Industrial Modernization by the Ministry of Economy, Trade and Industry." We spent an hour walking from Uno Station to the Uno Port area with Mr. Okura and saw not only the works from the Setouchi Triennale, but also the sea and islands, the ferries, and other characteristic Setouchi scenery, and also got a sense of the history of Uno Port and the Uko Ferries. "Lastly, let's take another look at the Uno Station station building, but this time from a slightly more distant position. From here, it looks like the lines, which all seemed to be disconnected up close, are now all connected. It's amazing isn't it", asks Mr. Okura.
The guides of the Tamano Tourism Volunteer Guide Tsutsuji no Kai (Azalea Society) can propose a variety of courses tailored to your time waiting for the ferries heading out to the islands, or tailored to individual requests. Going with one of the guides makes a trip to Setouchi islands even more enjoyable.
Tamano Tourism Volunteer Guide Tsutsuji no Kai (Azalea Society) (Located inside the Uno Station Bicycle Parking Area" Saturdays, Sundays, and Holidays 10:00 to 16:00
Inquiries: Tamano City Tourist Association 0863-21-3486 There is a person who has seen many of the people who visit the islands from Uno Port, the gateway to the Islands of the Seto Inland Sea, Shikoku, and Takamatsu. That person is Mr. Masafumi Ogura, who started up "UNOICHI - Port Marche with Ocean View" in 2014.

"I began UNOICHI because I wanted to convey the sense of peace I experience just looking at Naoshima and the Seto Inland Sea which can be seen from Uno Port, as well as the ferries which travel to various islands, and I wanted people to be more familiar with them." 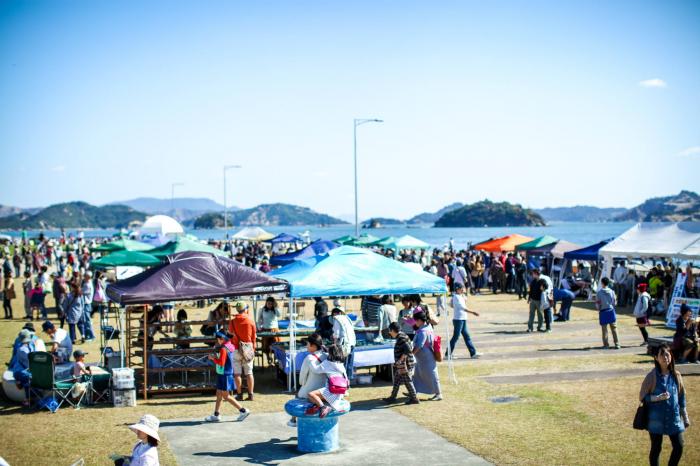 "At present, local high school students and the university students of the Kanto UNOICHI team not only hold the marche markets, but also convey, through their own feelings and ideas, the appeal of the Seto Inland Sea and Uno to visitors from both Japan and overseas. The core of these activities is a feeling of wanting people to always enjoy visiting the Seto Inland Sea, to feel a sense of something exciting and promising waiting here, and to transform the Setouchi region where we live into a place that can provide these feelings. Uno Port receives many tourists from overseas who are heading to Naoshima and Teshima. Just providing these visitors with information on ferry boarding locations, ferry times, and other small amounts of information makes their visit more enjoyable. I believe if they create good memories while they are here, they will take those memories back to their country with them and tell their friends and family there about Uno and the islands. And I would be very happy if the people they tell were to then visit Setouchi for themselves. The Seto Inland Sea is like a gentle and all-embracing mother. It gives a sense of peace just looking at it. I believe that it is our role to convey this allure while also protecting the sea."

After walking with Mr. Okura from the Tsutsuji no Kai (Azalea Society) and talking with Mr. Ogura from UNOICHI, I have seen firsthand just how much Uno Port is loved by the people who live here. Bask in the sea breeze and experience the art and history of Uno Port while relaxing and taking a stroll after checking the ferry departure times.