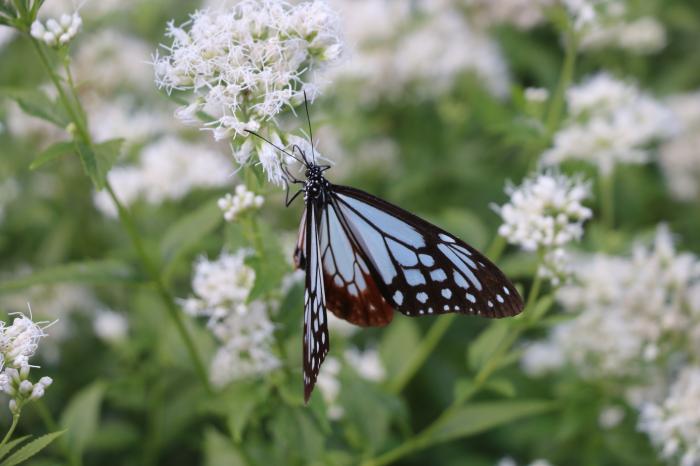 Like migratory birds, the Chestnut Tiger butterfly journeys long distances. Smaller than the swallowtail butterfly, their bodies measure about 10 centimeters in length, and their wings are a beautiful marbled pattern of light yellow and indigo bordered in black. In spring, they fly north, and in autumn, they fly south, traveling as much as 2,000 kilometers.

The coasts and islands of the Seto Inland Sea provide pit stops for the butterfly on its journey. 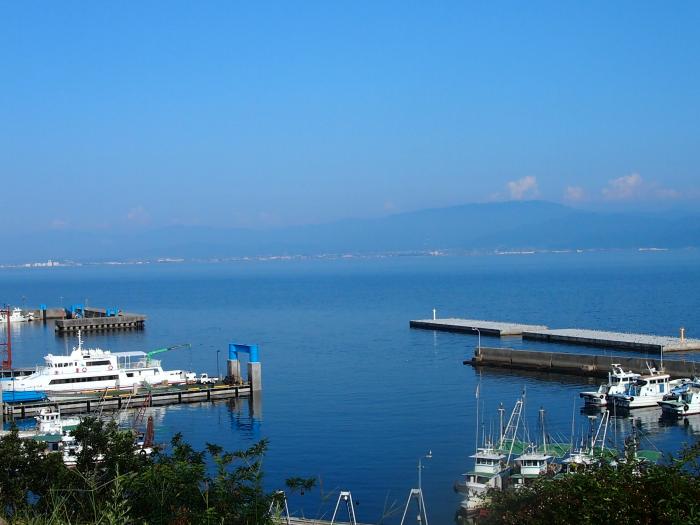 Ibukijima, an island located about 10 kilometers from Kanonji Port, recently turned itself into one of those pit stops. It all started in 2015 with a phone call from the Chestnut Tiger Migration Association in Kanonji, which supports the migration of Chestnut Tiger butterflies.
“How about planting some thoroughwort on Ibukijima?” the representative suggested. “It flowers in autumn and might attract Chestnut Tigers on their way south. Are there any empty fields we could use on the island?”
Kanemitsu Miyoshi, the man who shared the history of Ibukijima in a previous blog post, quickly became a key person in the drive to make the island a stopover for the butterflies. 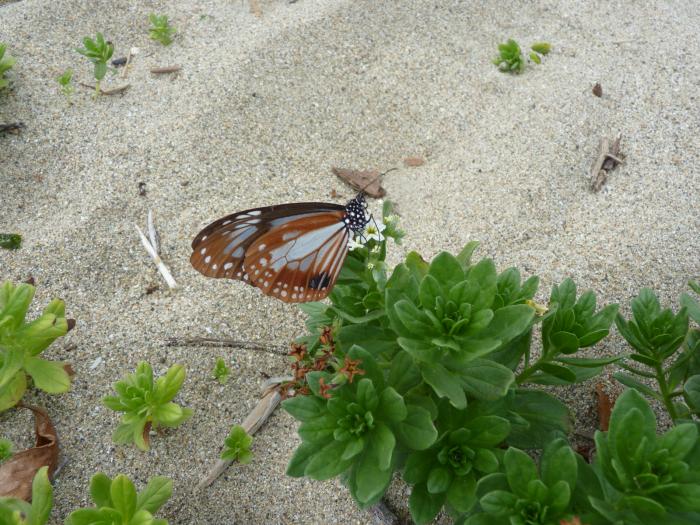 The plant in the photo above is called sunabikiso. It’s currently an endangered species. Chestnut Tiger butterflies like to drink the nectar of this plant while flying north. When flying south, they seek out the nectar of thoroughwort. Sunabikiso grows naturally along Ariake Beach in Kanonji city. In May 2013, Chestnut Tigers were sighted there. That inspired the idea of planting thoroughwort on Ibukijima to give the butterflies a rest on their way south in autumn. Ibukijima is just a short distance over the water from the beach. 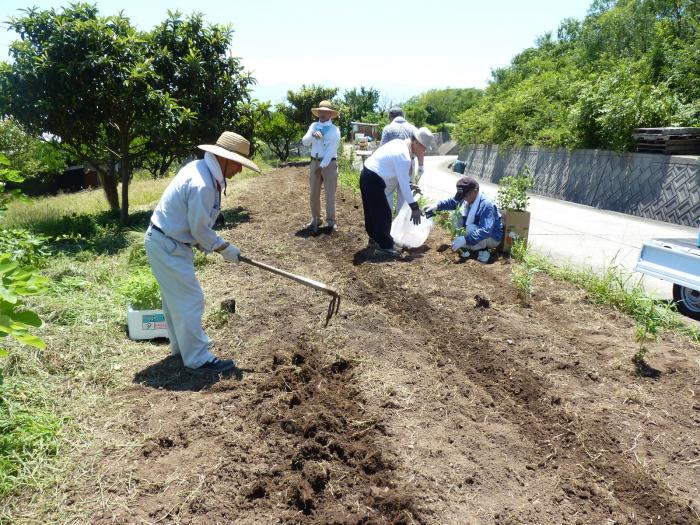 As a result of that phone call, the islanders and members of the Kanonji association began collaborating. At the end of August 2015, 380 thoroughwort seedlings were planted in a fallow field near the island’s Maura Port. In October, just three months later, five Chestnut Tigers were sighted for the first time on Ibukijima. 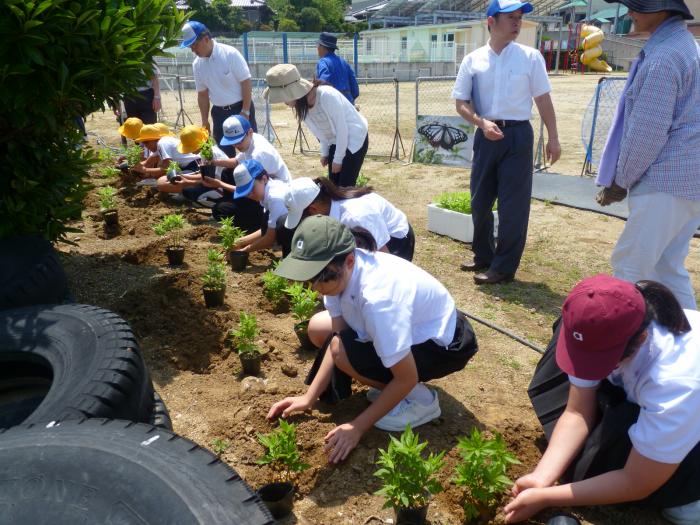 With the involvement of the island’s elementary and junior high school, the movement to entice these butterflies to Ibukijima spread even further.
In 2016, a special project was launched in which the students planted 50 thoroughwort seedlings in the school grounds under the guidance of members from the Kanonji association. The children watered them all summer, too. According to the student newspaper, about 140 butterflies were sighted in 2016 and 79 in 2017.

In addition, in 2017, an expert taught students the marking method in which butterflies are tracked by capturing, marking, releasing and then recapturing them elsewhere. They succeeded in marking 40 butterflies! The students also began exchanging videos and letters with other schools in Japan that have turned their grounds into rest stops for these butterflies. In this way, the migrating butterflies are connecting the islanders with people located elsewhere along their route. 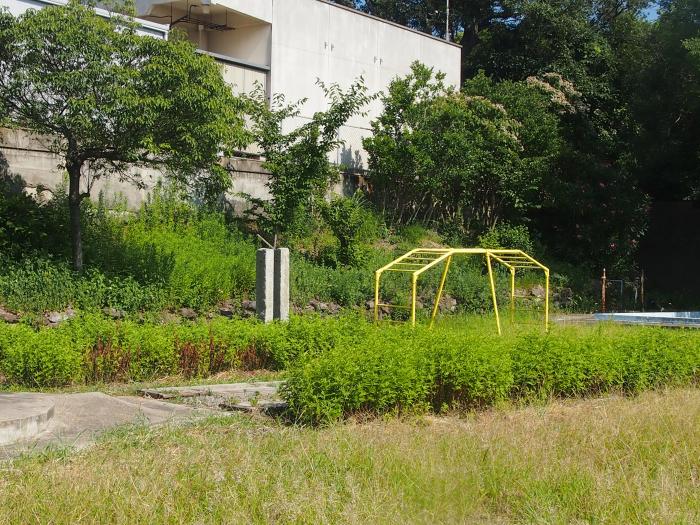 In 2016, when the school project began, thoroughwort seedlings were also planted in the garden of the Ibukijima Folk History Museum, which was one of the sites for artworks in the 2016 Triennale. The flight of the Chestnut Tiger butterflies coincided with the Triennale’s autumn session.

“Many visitors who came to see the artworks were overjoyed when they saw the butterflies. That sight impressed them as much as the art,” Mr. Miyoshi told me.

“I’ve seen as many as 30 Chestnut Tigers in Maura, the first place where we planted thoroughwort. That’s a huge kaleidoscope of butterflies you know. It made me so happy to see them fluttering here and there. They’re quite friendly and cute. If you wave a white towel, they think it must be their mates, so they’ll fly over to you. They also play dead.” 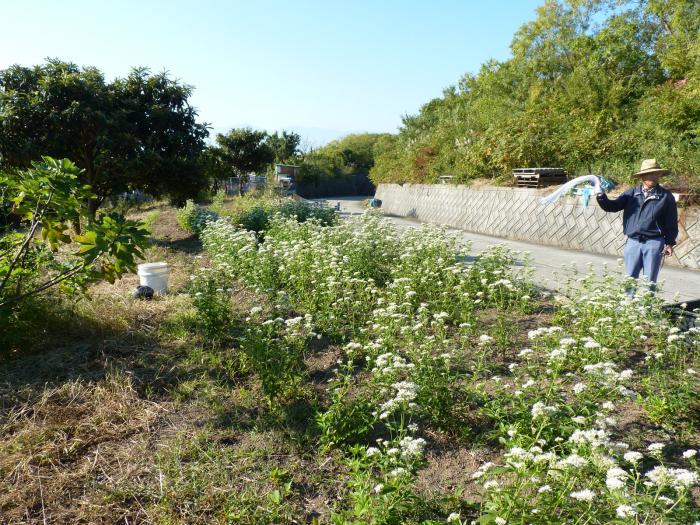 In October, when Chestnut Tiger butterflies migrate, the islanders come to the thoroughwort fields, hoping to see them.
In addition to Maura, the museum and the school, there is now some thoroughwort planted at Kitaura Port. Thoroughwort doesn’t take much maintenance, but it must be watered in hot weather. Mr. Miyoshi told me he waters the plants every evening for the whole summer. “When we choose where to plant thoroughwort, the first thing we consider is water supply. We also look for a place near a slope so that the fragrance of the flowers will be borne up into the air and attract the butterflies. It’s important to have some trees nearby, too, so the butterflies can take shelter when it rains.” 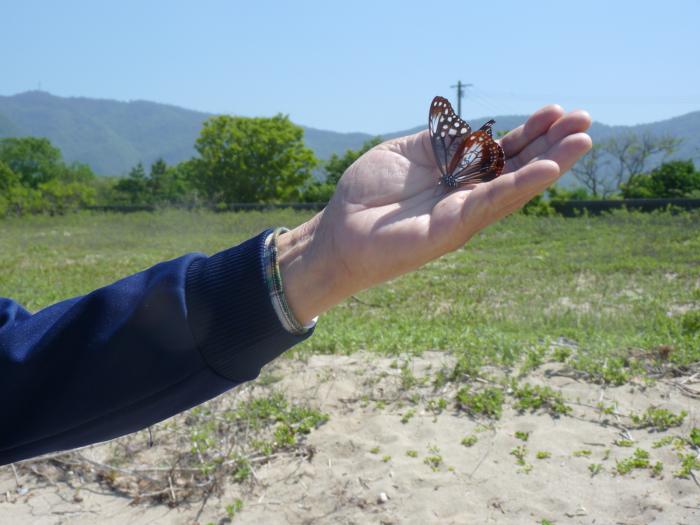 I thought the butterflies migrated back and forth, but in fact, each butterfly only travels one way. Those that drink the nectar of the sunabikiso on Ariake Beach in May on their way north, spend the summer in the highlands of Nagano and northeastern Japan. There they lay their eggs and die. The butterflies that hatch from those eggs then fly south, stopping in Setouchi on such islands as Ibukijima in October and continuing on to Kyushu and Okinawa. Some have flown as far as Taiwan. Their lives are short. After laying their eggs in the south, they die. But not much else is known about their ecology yet.

Just as in 2016, Ibukijima will participate in the 2019 Triennale next fall. A joint project to attract Chestnut Tigers has been started up with all four islands in the west that are participating in the Triennale (Honjima, Takamijima, Awashima and Ibukijima). On May 28, 50 thoroughwort seedlings grown on Ibukijima were planted on each of the other three islands by residents and members of the Kanonji association. This movement is entirely supported by volunteers who want many people to enjoy and appreciate these beautiful butterflies. Thanks to them, Triennale visitors who alight on these islands in 2019 may be lucky enough to see some.

No one, however, can predict where or how many will come. Sighting the butterflies is a rare and precious experience, which is perhaps why the Chestnut Tigers have captured so many people’s hearts.

The connections between people forged by migrating butterflies have spread from Ariake Beach in Kanonji to Ibukijima, and from Ibukijima to three other islands. This time, those connections will spread even further to include those who come to the Triennale and have the good fortune to see them.
If you come to the autumn session, you may be lucky enough to see the butterflies alighting on all four of the Triennale’s western islands.