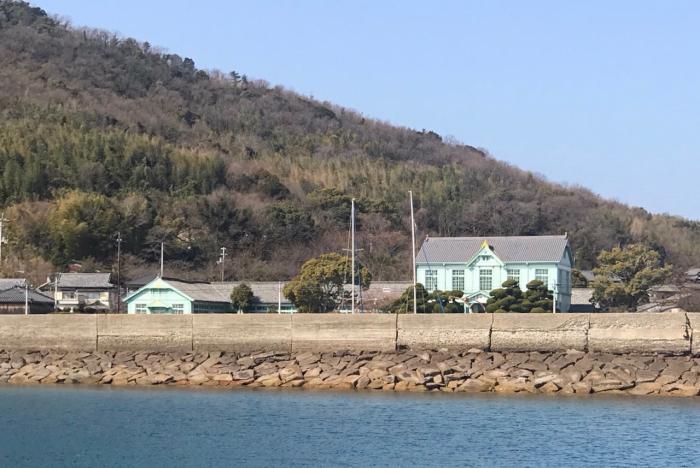 Shaped like a ship’s screw, Awashima consists of what used to be three islands that were later joined by sandbars. It once flourished as a port for the cargo ships known as “kitamae-bune” that carried goods from Hokkaido and northern Japan to Osaka and Kyoto via the Seto Inland Sea. Later, Awashima became the site of Japan’s first maritime training academy. Many of the islanders manned ships on ocean routes, and at one point, every family had at least one member who was a sailor.
I went to Awashima to speak with graduates of Japan’s oldest maritime school, all former seamen, about life on the island and on the sea. 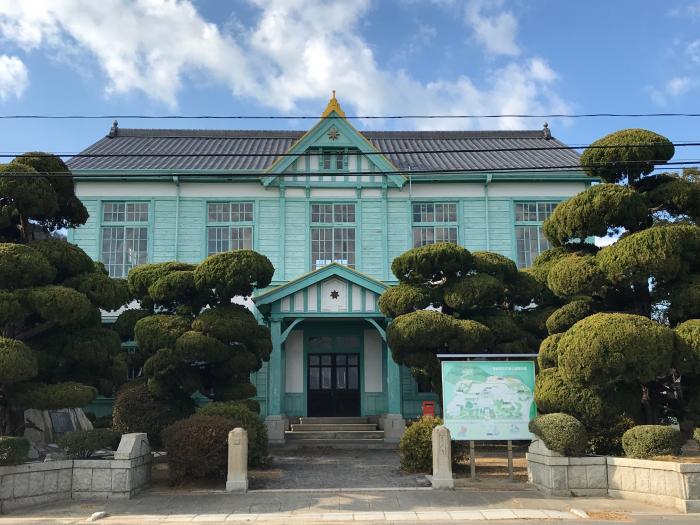 The maritime academy was established on Awashima in 1897. Many of the islanders made their living as sailors on the “kitamae-bune” trading route, but by the latter half of the 19th century, traditional Japanese boats were being quickly replaced by Western schooners and steamships, and sailors were required to pass a national exam to operate them.

In 1897, local village council member and shipping entrepreneur Torasaburo Nakano offered his own funds and land to build a maritime training academy. In 1906, the school was brought under the jurisdiction of Kagawa prefecture, and it continued to produce many skilled seamen for ocean-going ships until it closed in 1987.

The school’s current two-storied wooden structure was built in 1920 and now houses the Awashima Maritime Museum with exhibits of maritime equipment, models, photos and other materials related to that era. An old anchor and ship’s bell are displayed in the garden. 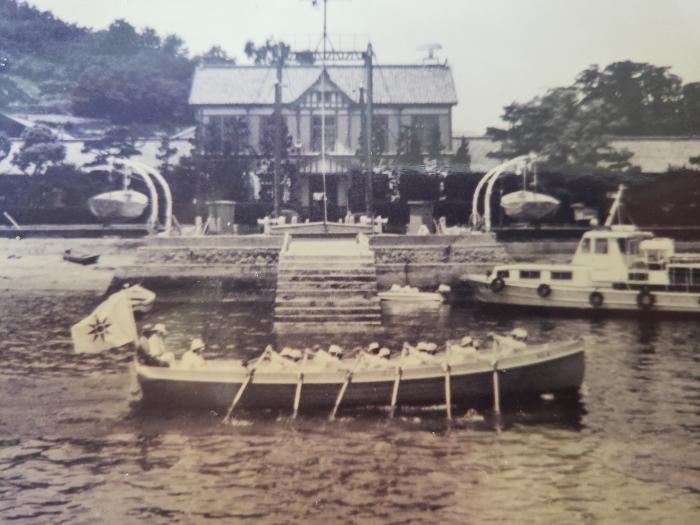 I met with members of the Friends of the Sea Society to hear about their experiences. All of them had graduated from Awashima’s maritime training school, mostly between 1945 and 1955, and were now in their seventies and eighties. And all of them had had long careers on ocean-going vessels.
They started off with episodes that I was sure could only have been heard on this island of sailors. “In those days,” one says, “families had so many kids, they always sent at least one to this school.” Another one pipes up, “You couldn’t even walk a few steps without bumping into a sailor.

“When we were young,” Tomoyoshi Yamakita (88) explains, “you couldn’t make a decent living without riding the ships, so many of us became sailors. If you stayed on land, you had to figure out how to get enough to eat, but on the boats, we were always fed.” As soon as he graduated from junior high school, Yamakita became a sailor and served as quartermaster, traveling to a total of 48 countries.
“Twenty of my classmates trained in the deck department,” says Keiji Tao (75), the chair of the Society, “and another twenty trained in the engine department. People who wanted to serve on deck could enter the school straight after junior high, but people who wanted to train as engineers had to be a year older.” Tao entered the maritime school right after junior high and trained in the deck department, learning the basic knowledge required of a sailor such as knots and rust descaling. 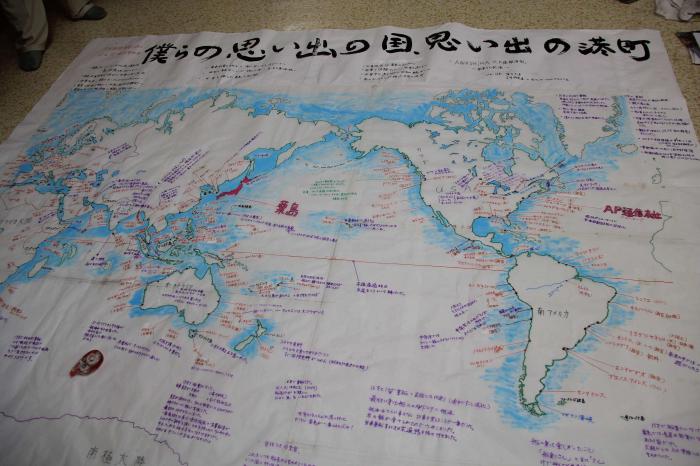 Different shipping companies handled different goods and plied different routes, so classmates rarely ended up on the same ship. Yukio Yamakita (77) shared his experiences on the sea. “Once we set off on a voyage, it was quite common to be gone for half a year. There were times when I became quite depressed while on the ocean. I only learned that my daughter had been safely born by telegram.”

Tadayoshi Higaki (81) shared his memories of that time as well. “Because we were gone so long, our wives had to do everything a man would ordinarily have done at home. It must have been really hard. Rice was rationed, so we took a ration book with us when we boarded ship.” 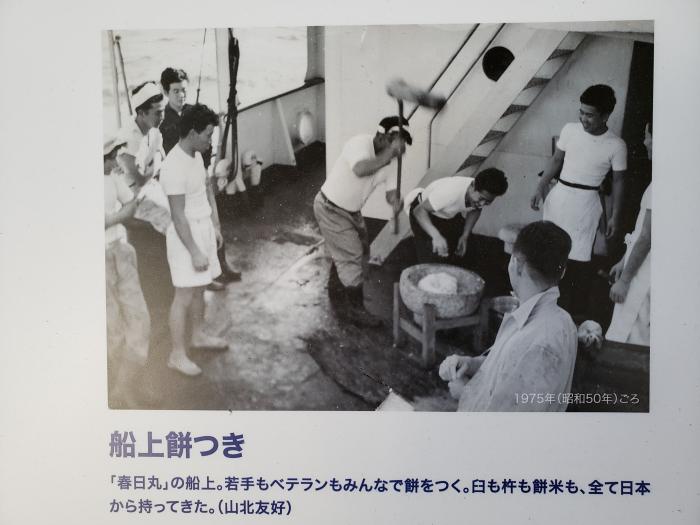 Toshifumi Nakanishi (76) remembers that there were times they celebrated New Year’s on the sea. “We would pound sticky rice to make traditional rice cakes, tie a thick braided rope around the smokestack and place a New Year’s decoration atop the mast. We went to more countries than I can remember, and I can’t even begin to count the number of ports we stopped in.”

“I only have good memories of that time,” Shohei Ikeda (86) tells me. He graduated from the school in 1950. Like his friends, he joined a shipping company after graduating and traveled around the world.

Tsunekazu Matsuoka (73) shared an anecdote from just before he graduated. “At the end of March, the school sent us off to interviews at shipping companies. I was sixteen and had to travel to Kobe all by myself. Of course, I got lost. But someone kindly gave me directions. There were more than ten big shipping companies at the time. I rode a 40,000-ton tanker that was 360 meters long. We communicated with
foreign sailors in English or Spanish.” 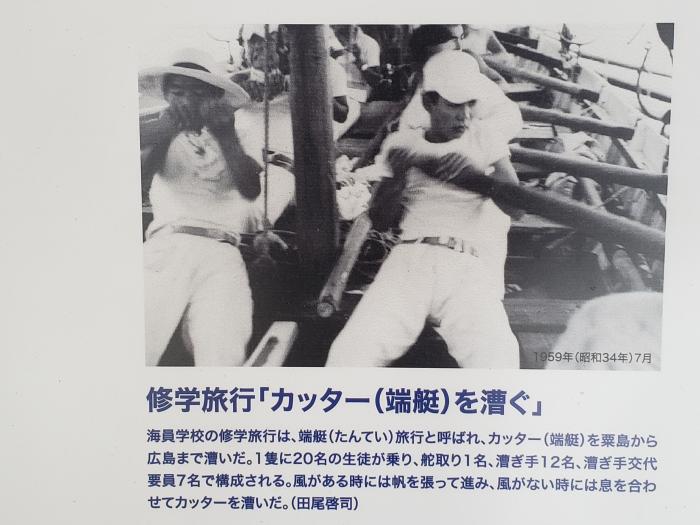 “I was an only child, but I still became a sailor,” Tadaaki Matsuda (79) says. “You couldn’t survive if you didn’t find work off the island. My first job was shipping massive lauan logs from Southeast Asia to Japan. We often went to the Philippines. We carried things like coal and iron ore. I joined a company but I never went to the office. Once our ship was decided, we would all gather at the port from which it sailed. That’s what it meant to be a seaman.”

Now we have cellphones, but in those days, sailors received their instructions by telegram. Matsuda said that he even had to board a ship from a port in Germany. “You can’t carry 70,000 tons of coal or iron ore by plane, can you?” he says. “Only ships can do that.”
Tao tells me that he rode a 270,000 ton tanker that was 350 meters long. “When a boat is so huge, it’s like riding a moving mountain,” he says. The deck was big enough to practice baseball or golf. 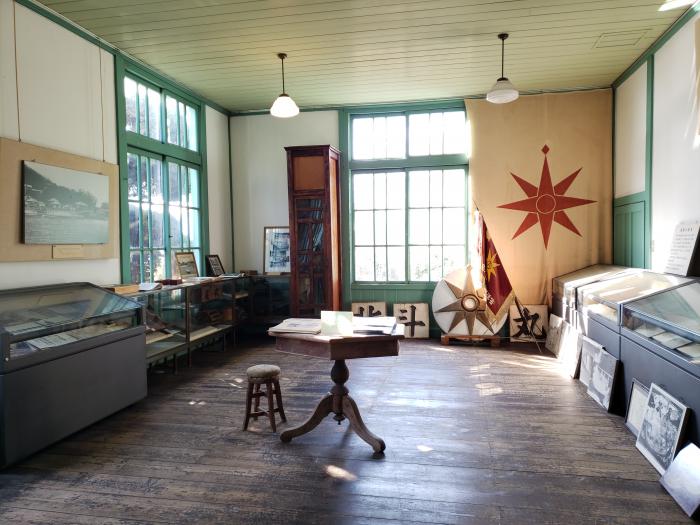 The members entertained me with lots of other anecdotes. I learned that many of the letters sent to the island’s post office were written in foreign languages; that sailors were able to eat rice when most of the islanders could only afford barley; that being on a ship is safer than being on land when a typhoon approaches because you can avoid its path. Some of the ships had all Japanese crews while other crews were of mixed nationality, but no matter which ship you were on, these men told me, communication was never a problem because all sailors used the same vocabulary. 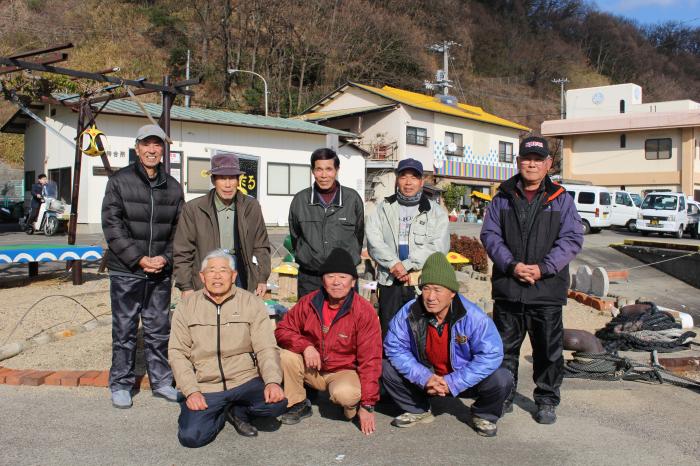 The sailors of Awashima who braved the surging waves to sail the oceans of the world were often told by their captains to consider themselves “rank-less ambassadors.” They were instructed never to go ashore wearing just sandals or slippers and to be careful of their appearance and remember their pride as a Japanese no matter how small the port of call.

When you go to Awashima, be sure to visit the Awashima Maritime Museum. Photos and artifacts that show what life was like for sailors and islanders at that time are exhibited on the first floor. Here you can find traces of the Awashima seamen who supported Japan’s shipping industry.