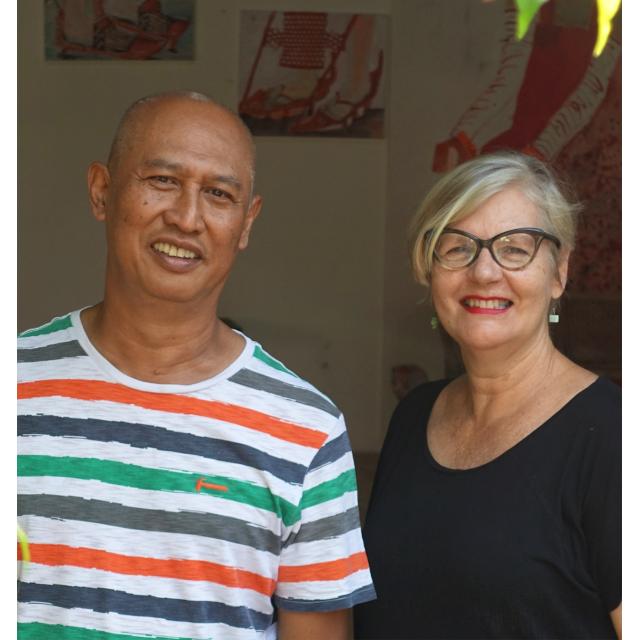 Born in the Netherlands in 1960, Mella Jaarsma has become known for her complex costume installations and her focus on forms of cultural and racial diversity embedded within clothing, the body and food.
She came to Indonesia to continue studying art in mid-1980’s. In 1988, she co-founded Cemeti Art House (with Nindityo Adipurnomo), the first space for contemporary art in Indonesia, which to this day remains an important platform for young artists and art workers in the country and region.
(Selected recent exhibitions): 20th Sydney Biennale (Australia, 2016), ‘The Roving Eye’, Arter, Istanbul(Turkey, 2014), ‘Suspended Histories’, Museum Van Loon, Amsterdam (2013), ‘Singapore Biennale’(2011), ‘GSK Contemporary – Aware: Art Fashion Identity’, the Royal Academy of Arts, London(2010), ‘Accidentally Fashion’, Museum of Contemporary Art, Taipei (Taiwan, 2007), Yokohama Triennial (2005)

Born in Semarang, Central Java, Indonesia. Finished his visual art education at STSRI ”ASRI” Yogyakarta in 1988. He went to Amsterdam, the Netherlands, in 1987 for a year residency at The State Academy of Amsterdam. Since then, he has been joining many international/local residency programs as well as workshop for artists and art activists up to now. His works have been presented in the collection of art institutions, such as museums, national galleries, and any other art spaces. They have also been exhibited in important exhibitions such as “The Jakarta Art Council Biennale IX” (1993), “The 2nd Asia Pacific Triennial of Contemporary Art” in Brisbane (1996), “Contemporary Art in Asia: Traditions/Tensions” in New York (1996), “The Havana Biennial” in Havana – Cuba in 1997, “The Second Fukuoka Triennale” in Fukuoka  Japan (2002), “Gwangju Biennale” in Gwangju  South Korea (2002), “Circle Point Open Biennale” in Jakarta (2003), “Busan Biennale” in Busan  South Korea (2004), “Taboo and Transgression in Contemporary Indonesian Art” in Herbert F. Johnson Museum Cornell University  Ithaca  New York (2005), the Museum of Contemporary Photography in Milano Italia (2006), the National Gallery Singapore, and recent Jakarta Biennale (2013). Nindityo has worked collaboratively with Garin Nugroho for Opera Java (movie by Garin Nugroho) in 2005; and also with an Indonesian prominent choreographer, Retno Maruti, for Roro Mendut. He participated in The International Sculpture Exhibition for project ‘Grandeur’ in Sonsbeek Park, Arnhem, Netherlands in collaboration with Mella Jaarsma. Starting in 2010, both Nindityo and Mella have been conducting an artistic research on the idea of cultural hibridity such as ‘peranakan’ in Lasem, Rembang, and Semarang for many reasons in developing the strategy of medium. “Toekar Tambah” was one of the projects out of this ongoing artistic research; presented in Semarang Gallery in 2011. Later, he engaged in “Pseudopartisipative Art Project” with Cemeti Art House in 2013. The recent interdisciplinary collaboration between art activism and religion activism was “Religion Got Talent” (2015) with Linda Mayasari and Doni Maulistyo. Together with his partner, Mella Jaarsma, he founded The Cemeti Gallery in 1988 in Yogyakarta (since 1999 changed into Cemeti Art House), curating monthly exhibitions and art projects of Indonesian as well as international artists in galleries. In 1995, he set up The Cemeti Art Foundation which is now IVAA (Indonesian Visual Art Archive) and is recently functioning as an advisor of the foundation’s Advisory Boards. In 2005, he received A Long Life Achievement Award: John D. Rockefeller’s 3rd Award of the Asian Cultural Council in New York together with Mella Jaarsma. With more artists and art activists as well as architects, Nindityo Adipurnomo is an active think-tank member of the boards of Yogyakarta Biennale Foundation which initiated Biennale Equator in 2011, 2013, 2015.